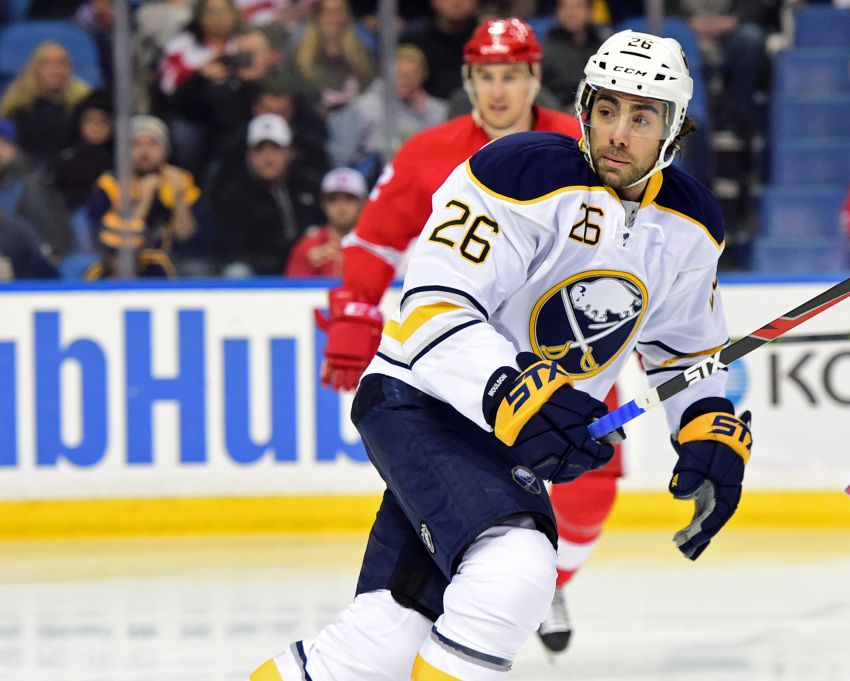 BUFFALO – Don’t call it a promotion. Winger Matt Moulson hardly earned his spot beside No. 1 center Ryan O’Reilly and Evander Kane for the Sabres’ 3-0 loss to the Detroit Red Wings on Friday. The struggling veteran hasn’t scored since Nov. 1, a stunning 36-game stretch.

“I don’t like where his game has been at,” Bylsma said Friday morning. “But we’re in a situation tonight where we’re going give him a chance to get his game where it can be, where it needs to be for us. He’s played next to Ryan for a 10-game chunk during this year with Brian Gionta. … He should and needs to … be in a top-six role.”

Clearly, Bylsma’s frustrated with Moulson, who has endured a brutal season, compiling only four goals and 12 points in 47 games. Moulson, 32, has mostly been a fourth-liner for the past month. He was even scratched Dec. 30. He entered Friday having skated less than 10 minutes in six of the last seven contests.

What does Moulson, a three-time 30-goal scorer, have to get back to?

“I think just getting to the net, making plays, make sure I’m controlling the puck, especially in their zone and make sure I’m moving my feet,” he said.

It’s easy to forget, but Moulson started the second season of his five-year, $25 million contract strongly. He was on a 27-goal pace when he scored his 158th NHL goal 82 days ago. But Moulson suddenly went dry, and now he’s searching for answers.

“All you can do is try to put in the work and hopefully it takes care of the rest,” he said. “I think that’s all I’m trying to concentrate on personally the last little bit. You can’t really let your mind get too mixed up in the other things.”

To replace Reinhart, the Sabres recalled forward Cal O’Reilly from Rochester, where he has four goals and 23 points in 35 games. The Sabres placed winger Zemgus Girgensons (upper body) on injured reserve to create a roster spot.

O’Reilly had one assist in two games earlier this season, his first NHL action since 2011-12.

“I felt pretty good last time I was up,” he said. “I just want to come here and build off this.”

O’Reilly, an AHL All-Star with the Americans, skated with center Jack Eichel and Jamie McGinn and also played on the power play.

Bylsma said he’s confident Reinhart, who collided with Colorado’s John Mitchell in Wednesday’s 2-1 loss, will be ready after the NHL All-Star break early next month.

The Sabres made one other lineup change, inserting defenseman Jake McCabe for Josh Gorges, who has missed two out of the last three games with an upper-body injury.

Bylsma already has 25 regulation losses, one more than he had in all of 2013-14, his last season coaching Pittsburgh. He never lost more than 28 regulation contests during his six years with the Penguins.

Expectations, of course, were low for the Sabres this season coming out of a rebuild. They’re clearly a much better and more competitive team.

Still, the losing is wearing on Bylsma.

“It’s difficult,” he said. “There’s no question we want to win every game going in. I know we’re in a development process. We’re in the process with our team (developing) how we play, how we want to play, the level at which we want to play and compete at. … I think it’s put us into being a competitive team.”

Bylsma said the Sabres’ loss Wednesday – the Avalanche scored with 32 seconds left – gnawed at him.

“I didn’t have a great two days chewing on that one in Colorado,” he said.

One thought on “Sabres’ Matt Moulson moves up to scoring line”