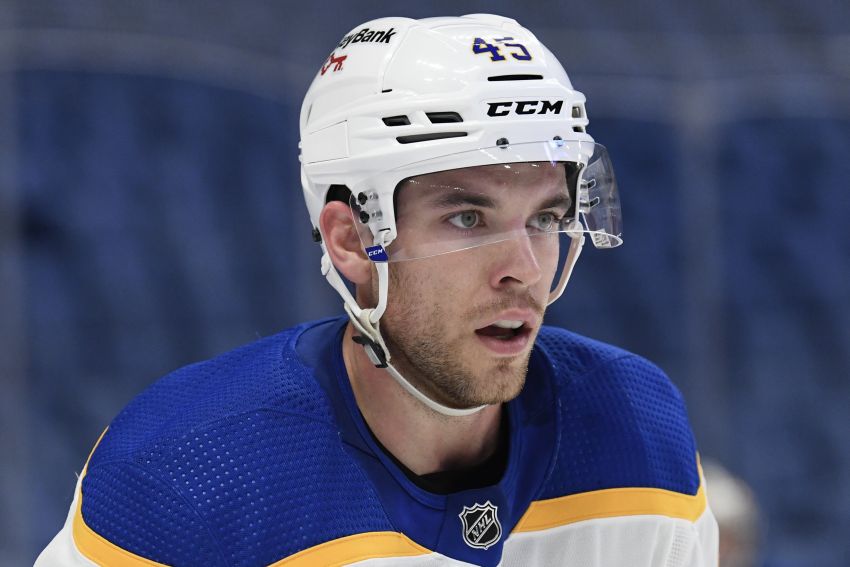 BUFFALO – The Sabres made three roster moves prior to Friday’s season finale against the Chicago Blackhawks, sending defenseman Casey Fitzgerald and goalie Aaron Dell to the Rochester Americans and recalling netminder Michael Houser.

The Amerks, who thumped the Utica Comets 8-1 in Friday’s regular-season finale at Blue Cross Arena, needed the victory to stay alive the AHL North Division playoff chase. Their defense has been decimated by injuries and recalls, so Fitzgerald’s arrival was critical.

After beginning the season in Rochester, Fitzgerald earned regular duty with the Sabres, playing his first 36 NHL games.

The Sabres had been dressing a defense corps so young that most nights Fitzgerald, 25, was the oldest member.

“He’s right there,” Granato said. “Unfortunately, the day to day is going to run out for him. It’s not anything significant.”

In other lineup news, Houser backed up goalie Dustin Tokarski. Veteran goalie Craig Anderson has been nursing an undisclosed injury and couldn’t play.

“He’s just not comfortable with it,” Granato said of Anderson.

The Sabres recalled Dell prior to Thursday’s 5-0 road loss to the Boston Bruins to back up Tokarski. Dell replaced Amerks goalie Ukko-Pekka Luukkonen after he suffered a lower-body injury early in Friday’s game.

“We just felt with the importance of Rochester’s game tonight that they should have two goaltenders there that could be ready at any moment,” Granato said of Dell’s assignment to Rochester.

Houser played two games with the Sabres earlier this season, compiling a 2-0-0 record with a 2.00 goals-against average and a .948 save percentage.

Granato said recalling Houser, who has been playing with the Cincinnati Cyclones, the Sabres’ ECHL affiliate, was a nice reward for the veteran. He was scheduled to start another NHL game when he entered the NHL’s COVID-19 protocol in late January.

“He hasn’t played a lot of NHL games and he’s had a long professional career,” Granato said of Houser. “That was a tough day for all of us, I think, and a really tough day for him. But I can tell you the whole staff was pretty sad. He was going to start and he ends up in COVID protocol and doesn’t know if that’s his last opportunity. So it was an easy, comforting thing for us to welcome him back.”

Houser posted a 42-save shutout Thursday in Cincinnati’s 2-0 playoff win over the Toledo Walleye.

Cincinnati leads the best-of-seven series 3-2. Houser is expected to rejoin the Cyclones today for Game 6.

Notes: Sabres goalie Malcolm Subban, who suffered a season-ending upper-body injury Jan. 14, sang the American National Anthem, drawing a roar from the crowd. … Prior to the game, Okposo was named the winner of the second-annual Rick Martin Award. The award, which is decided by a fan vote, is given each season to the player who “best demonstrates on-ice excellence, resiliency, and dedication to the community,” according to the team. … The Amerks need the Toronto Marlies to lose in regulation today to the Belleville Senators to clinch a playoff spot. … The Sabres welcomed back defenseman Jake McCabe, who’s in his first season with the Blackhawks.