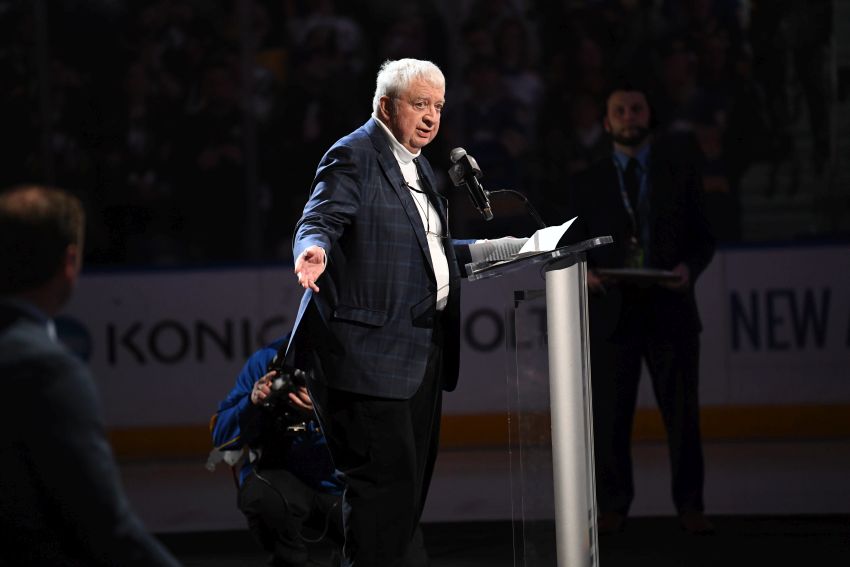 BUFFALO – Coach Don Granato said he can’t simply tell his players about the Sabres’ history. They need to see and experience it for themselves.

That’s why Granato believes the Sabres’ season-long celebration of legendary play-by-play man Rick Jeanneret, who called his final game Friday, will have a lasting effect for his young team.

“Having everybody celebrate RJ this season meant they celebrated 50 years of Sabre hockey and the history,” Granato said prior to Friday’s 3-2 overtime win against the Chicago Blackhawks in the season finale at KeyBank Center. “So everybody celebrating allowed our guys to kind of immerse and feel that – feel the history and the pride in this organization and our fan base and the Sabre logo.

“And it was impactful. This was a very impactful season for a group of guys that we have here, young guys that we know we’re going to have for a pretty long time. And so the timing made my job easier a lot and my life a lot easier. So thank you, RJ.”

Following the game, players, who wore Jeanneret photos on their skates during warm-ups, and most of the crowd of 16,505 fans stayed to listen to his remarks as he signed off the air after 51 years.

Minutes later, the 79-year-old walked on the ice and received a rousing ovation, with fans chanting, “Thank you, RJ!” as he hugged employees and fans.

“Winning like that makes it that much more special for RJ and I think we owed that to him,” said Sabres center Tage Thompson, who scored his team leading 38th goal 4:16 into the third period. “To all of the fans that came out tonight, I think we took it to heart by not wanting to let down RJ and our fans in the building. We are just passionate guys that we have in this group.”

Granato said the belief the Sabres possessed in the third period was “spectacular.”

After making so much progress this season, Granato wanted to end the season on a high note.

“When you look at the season and our culture and what we want to build, I thought it was a good reward for our guys, hopefully symbolic, of you’re going into an offseason, you don’t want to end it on a sour note, and you find something within to come back in that game,” Granato said. “You give up a goal and again you find a way to get back in it. So a real credit to our guys, I was real happy for them for that reason. Fun building, fun atmosphere with the fans.”

Dylan Strome put Chicago back up at 9:33 before Sabres defenseman Owen Power, a 19-year-old who turned pro earlier this month, tied it again at 14:22.

Before Jeanneret retired, he got to call a goal by Power, the first overall pick in 2021.

Despite missing the playoffs for an NHL record-setting 11th straight season, the Sabres began generating hope in 2021-22, Granato’s first full season as coach.

For the first time since 2016, they finished the year surging, going 16-9-3 after March 1. The lineup is filled with young players who consistently displayed development throughout the campaign.

There’s optimism, a rarity in these parts, surrounding the Sabres. Fans like this team.

“This is obviously the most sad I’ve been to see a season go,” Mittelstadt said. “It was such a good group of guys. We’ve had so much fun this year and we’ve grown so much together. I mean, if you look around the room, I’m proud of so many guys. I don’t want to be a broken record, but just proud to be a part of the group.”