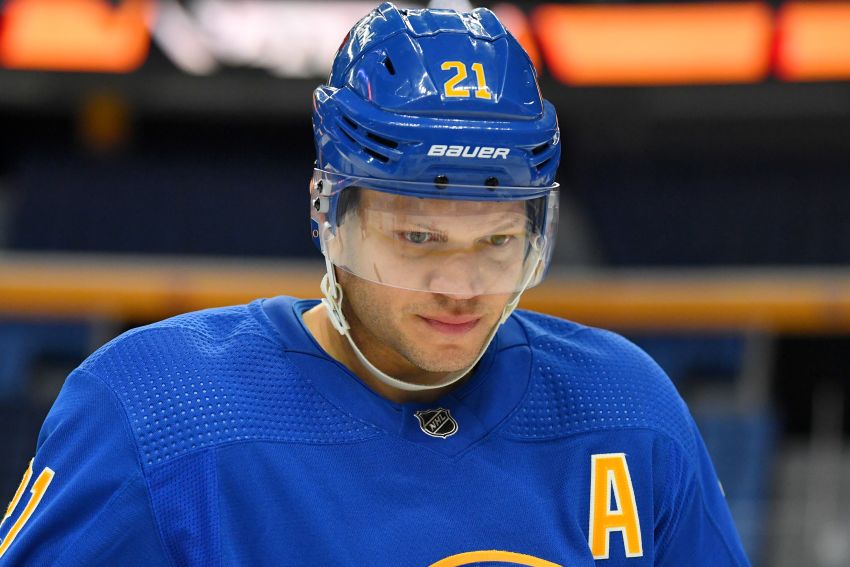 BUFFALO – In the waning seconds of Tuesday’s 4-1 win, Sabres winger Kyle Okposo grabbed the puck high in his zone and cleared it out just past the blue line.

A second later, center Cody Eakin scooped it up, skated through the neutral zone and scored an empty-net goal just before time expired against the New Jersey Devils.

In his 11th game this season, Okposo finally recorded his first point.

Okposo, 32, has started his 14th NHL campaign slowly, battling injuries after a 10-month layoff because of the COVID-19 pandemic.

Incredibly, Okposo registered just one shot on goal in his first six outings.

“It was hard coming off 10 months not playing a game and just trying to find your rhythm and then miss the first five games,” Okposo said on a Zoom call Sunday. “It’s not easy, but you got to find a way to deal with it and you got find a way to contribute. I just felt like personally I was a little bit, I don’t now, the game was fast, I was a little bit scatterbrained out there just trying to get used to it again.

“But I know that in the shortened season, we don’t really have time for that.”

So when the Sabres began their COVID-19 pause earlier this month, Okposo said he “kind of took a deep dive into my game.”

The power forward consulted with some friends, coaches and others who analyze his play. He also went back and watched his games.

“I kind of narrowed my focus on a few different things, and usually when I do that, I just simplify, I make the game as simple as possible, and then my game starts to build from there,” he said.

Krueger said on Saturday he had seen “bit and pieces” of Okposo’s confidence emerge since the break ended.

“It’s completely normal for a player of his style to need a little more time to get going after the long break and then the … two different bodily injuries,” Krueger said.

He added: “I see a healthy Kyle Okposo actually for the first time this season now and I believe that going to be a step back into being able to play in both directions the game that we need so desperately from him.”

On Tuesday, Okposo pumped five shots on goal. He had only mustered nine in his first 10 games.

Okposo’s Corsi For on Tuesday – the percentage of shot attempts by the team while a player is on the ice five-on-five – was a Buffalo-high 61.1%, according to NaturalStatTrick.com.

“I feel like since we’ve been back I’ve been more like myself,” said Okposo, whose puck retrieval Thursday created the Sabres’ only goal that night. “Our line’s starting to click a little bit. I think we just got to pop that first once we’re going to go from there.”

In his NHL debut Tuesday, Sabres defenseman Jacob Bryson, 23, registered one shot on goal and a plus-2 rating while skating 17 minutes, 59 seconds. He also hit the post after joining the rush in the first period and took a tripping penalty in the second.

“He’s a really smart player,” Krueger said following the game. “We weren’t surprised. There were times he still needed to correct the speed with which things happen, the gaps and how hard they are to get in the NHL. But with the puck, we liked his confidence throughout.

“He participated in the game without any fear. Just another good find for us on the defense, where we’re going to need depth moving forward. It was encouraging to see that today.”

The Sabres, who had a CBA-mandated day off Wednesday, returned goalie Dustin Tokarski from the taxi squad to the Rochester Americans.