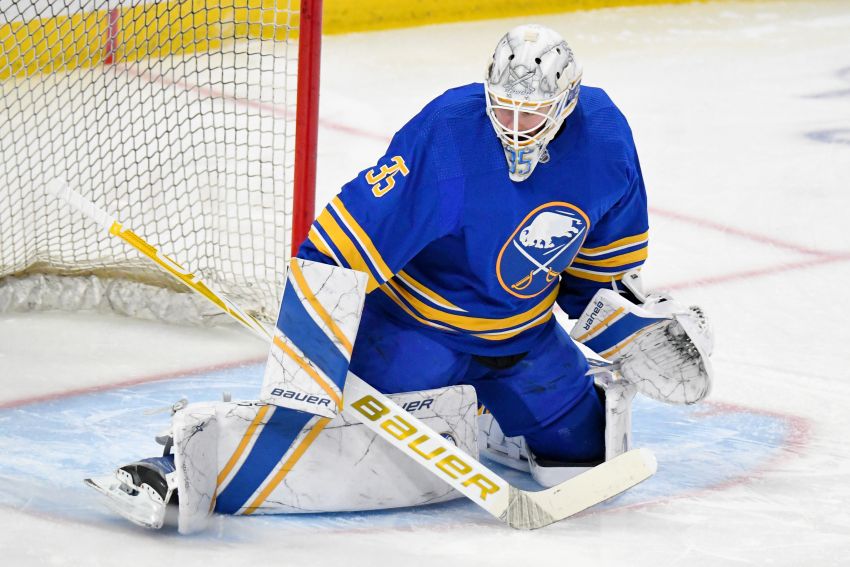 “We really want him to get a win here, to play well not thinking about what’s happened,” Sabres defenseman Rasmus Dahlin said on a Zoom call this afternoon. “We just got to make him feel comfortable everywhere.”

Ullmark, 27, faced the Capitals last Friday, stopping 19 shots in a 2-1 loss, his only appearance this season.

In other lineup news, Krueger said winger Kyle Okposo, who has missed the first four games this season with an lower-body injury, will likely sit out tonight’s contest at Capital One Arena.

The Sabres, however, will make an official call on Okposo’s status shortly before the game.

“I wouldn’t plan with Okie yet,” he said. “We really want to be smart and patient. But he’s going through the process, it’s great to have him around the team and there’s a higher chance that he’ll step back in Sunday. But let’s make that call in and around warm-up.”

The Sabres, who also play Sunday afternoon in Washington, have potentially caught a huge break.

The Capitals will be without four of their top players – superstar Alex Ovechkin, No. 1 goalie Ilya Samsonov, center Evgeny Kuznetsov and defenseman Dmitry Orlov – for the next four games because they violated the NHL’s COVID-19 protocols.

“It’s going to be good, not worry about him,” Dahlin said of Ovechkin.

Krueger knows the replacements the Capitals dress will showcase plenty of tenacity.

“It will be an aggressive group that comes at us, possibly less skill, but they’ll make up for it in fight,” he said. “Is that sustainable over longer period? Probably not. But on a short-term, it’s a dangerous team we’re facing today. We know that, so we’re definitely not relaxed here. We need to, at minimum, match or surpass the intensity that we’re expecting from them today.”

Rookie goalie Vitek Vanecek, who stopped 29 shots in his NHL debut last Friday, will start for the Capitals.

The Rochester Americans this afternoon announced their unique 32-game shortened schedule for the 2020-21 AHL season.

The Amerks open Feb. 5 against the Utica Comets at Blue Cross Arena, one of 12 meetings with their New York State rival.

The Sabres’ top affiliate also play 14 games against the Syracuse Crunch and six against the Cleveland Monsters.

The COVID-19 pandemic will limit the Amerks to just three opponents this season.

Here is the complete schedule: