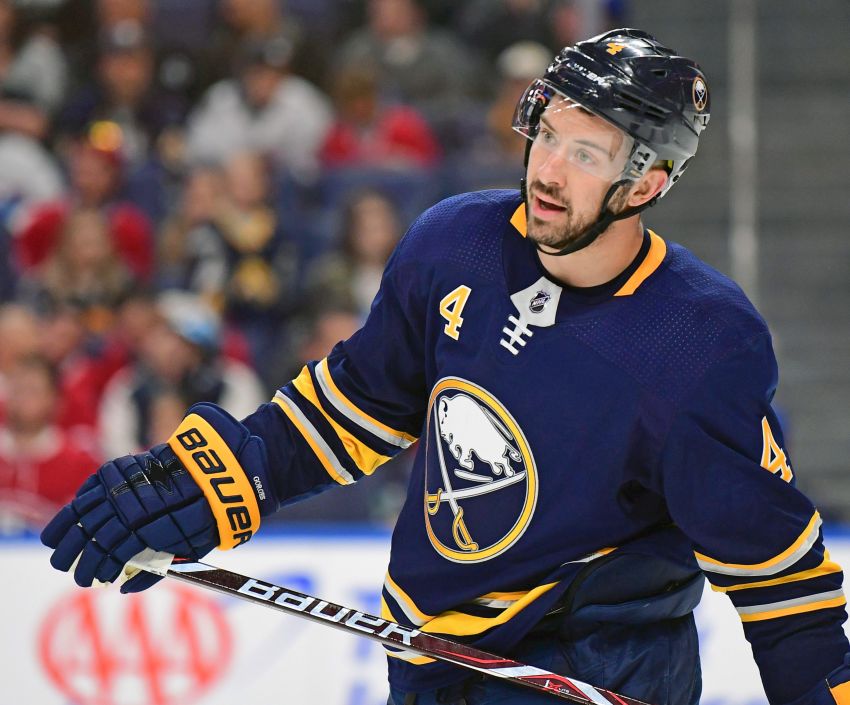 BUFFALO – Right now, Josh Gorges isn’t thinking about hockey. Following the roughest season of his 13-year career, the Sabres defenseman is decompressing by spending time with his family.

Gorges, 33, needs to get away for a bit. At the right time, the graying veteran, who will become an unrestricted free agent this summer, plans to evaluate his uncertain future.

“Kind of see what’s in store,” he said Monday as the Sabres cleaned out their lockers and held exit meetings inside KeyBank Center.

After last Saturday’s season-ending 4-3 loss in Florida, an emotional Gorges acknowledged to reporters it could’ve been his 783rd and final NHL appearance.

Gorges’ four-year Sabres career, of course, is over.

After playing a big role for three seasons, often on the first pair, he morphed into a spare part under new coach Phil Housley. The passionate Gorges played a career-low 34 games and short minutes as the Sabres stumbled to a 31st-place finish.

Gorges hadn’t been a healthy scratch in about 11 years. At one point, he sat out nine of 11 games. His ice time dropped from 18 minutes, 27 seconds an outing last season to just below 15 minutes.

While Gorges never complained about his new role, he said it “was extremely hard” to handle.

“You’re in a tough situation. You don’t want to be walking around the rink moping and feeling sorry for yourself. Your teammates don’t need to see that. … You try to come and do the best you can and keep a smile on your face and go about your day. But it wasn’t easy.”

Sure, it wasn’t easy, but Gorges begrudgingly accepted it. It’s a difficult role he can now play. Perhaps a team looking for leadership and a seventh or eighth defenseman would be interested in him.

That’s the most likely scenario if he plays next season.

Gorges left the door open he could play again. He enjoyed some long playoff runs with San Jose and Montreal but never won the Stanley Cup.

“There’s one thing that’s left undone, and that’s winning it all,” he said. “It would be hard to say that I don’t want to go back and have a chance at that. It’s something you’ve dreamed about since you were a kid, so that fire to win that is still there. So we’ll wait and see what summer brings.”

During the season, Gorges talked about his regrets the Sabres couldn’t make the playoffs during his tenure. In 2014, when they acquired him from the Canadiens, he was supposed to be one of the veterans who would lead them back to glory.

Despite some rough years, former Sabres coaches Ted Nolan and Dan Bylsma relied on Gorges heavily, often utilizing him as a shutdown defender, a role he relished.

“It’s not something you should take lightly. It’s something I’ve always been told and taught to play in this league is a privilege; it’s not a right. You don’t deserve to play here; it’s a privilege to play here. You’re playing with the best in the world. Take every day, because you don’t know when it could be your last.”