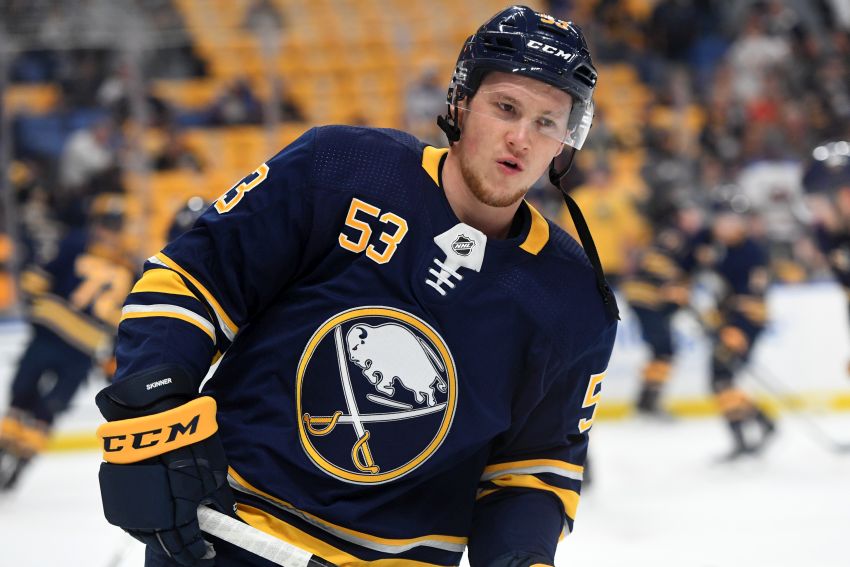 “I really like the way he’s working, his forechecking,” Housley said this afternoon inside KeyBank Center. “He steals pucks and he strips pucks. (I like) the way he’s coming back into our zone. There’s just nothing evolving from that point.”

Skinner, 26, is pointless in first four outings with the Sabres. So Housley moved the left winger, an offseason acquisition from the Carolina Hurricanes, to beside slick rookie center Casey Mittelstadt and Kyle Okposo today. Skinner played with Okposo and center Patrik Berglund in Thursday’s 6-1 loss to the Colorado Avalanche.

“Just trying to create some chemistry,” Housley said of the move. “He’s been held off the board as far as goals go, so I’m trying to get him going. I just think (Skinner and Mittelstadt) think the game alike.”

Skinner, whose screen helped create defenseman Nathan Beaulieu’s goal Thursday, is already frustrated. At one point during this morning’s practice, the three-time 30-goal scorer whacked his stick against the glass.

He added: “He’s doing the little things as well.”

More notes on the Sabres, who begin a five-game road trip Saturday in Arizona:

– Housley said goalie Linus Ullmark, who hasn’t played yet this season, could play against the Coyotes.

“We’re thinking about it, but we haven’t made that decision yet,” he said. “Obviously, we’re going to try to get Linus an opportunity on the road trip.”

– Housley said today’s practice was a “really good step forward” for defenseman Zach Bogosian, who hasn’t played since suffering a lower-body injury Sept. 25. Housley said Bogosian will accompany the Sabres on the trip.