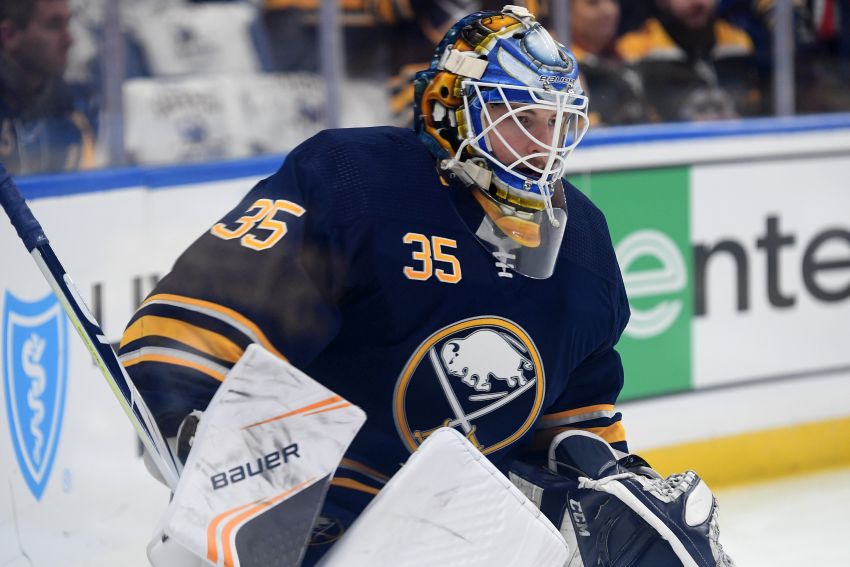 BUFFALO – Sitting on the bench patiently waiting for an opportunity to play is a new experience for Linus Ullmark. Since coming to North America three years ago, the Sabres goalie has averaged 51 outings a season.

The Swede is used to being the guy.

But this season, Ullmark, 25, graduated to the Sabres following a three-year AHL apprenticeship. While he certainly showcased the qualities of a No. 1 NHL goalie with the Rochester Americans and during his recalls, he is now the Sabres’ backup.

So far, Hutton has started the first four contests. Ullmark, meanwhile, has been quietly preparing for his chance to play.

That could come Saturday against the Arizona Coyotes, the start of a five-game road trip. Following Friday’s practice, coach Phil Housley said the Sabres were thinking about giving Ullmark the nod. Housley said Ullmark would play on the trip.

“I’m not getting frustrated by sitting on the side,” Ullmark said inside KeyBank Center before the Sabres departed. “It’s nice to be winning games. Huts is playing good. I’m not going to be a sour guy and be grumpy. … I’m just going to be the same guy I always am, very supportive, very happy.”

Ullmark usually has a smile etched on his face. In the past, he has explained how “Hakuna Matata,” a song from the movie “The Lion King,” inspires him.

Translated from Swahili, the phrase means “no worries.”

“He’s been very good in the room,” Housley said. “He’s a very good teammate, he works hard, he’s everything we want in a backup goaltender. … We really enjoy his enthusiasm every day, even though I know it’s hard because he hasn’t had an opportunity yet.”

Housley said Ullmark’s practice habits – “Trying to battle for every puck, every second opportunity,” he said – have been strong.

Ullmark has also developed a routine to stay sharp. In addition to staying on the ice after practice and working out following games, he said he talks to goalie coach Andrew Allen about focusing on specific areas of his game.

“It’s about sticking to the things I’m good at and trying to do all the things I’m less good at,” Ullmark said. “It’s a pretty broad spectrum for a goalie to be working on.”

Ullmark has also worked on getting to know Hutton. In just a month or so together, the goalies have already established a strong relationship.

“You go through so many different situations throughout a year,” Hutton said. “You need somebody to bounce ideas of off, just have good communication lines. I think so far, we’ve really established that. …

“I want him to feel confident around me talking about things and just that if I’m telling him something, he obviously trusts that it comes from the best place.”

Ullmark and Hutton carved much different paths to the NHL.

The Sabres drafted Ullmark and let him play three seasons at home before bringing him over. Days after he debuted with Rochester, the Sabres recalled him for the first time.

Hutton, a Canadian, played four years at UMass Lowell and had trouble finding work following his college career. Seven years ago, he played 14 games in the ECHL. It took him three years to earn his first NHL appearance.

“He’s a living example of trusting the process,” Ullmark said. “There’s always going to be good fortune for those who work hard and put their mind into it. I’ve always believed that if you work hard every day, you’re professional, you’re a good guy on and off the ice and you do whatever it takes to get where you want to, you’re going to get rewarded. He’s been that guy.”