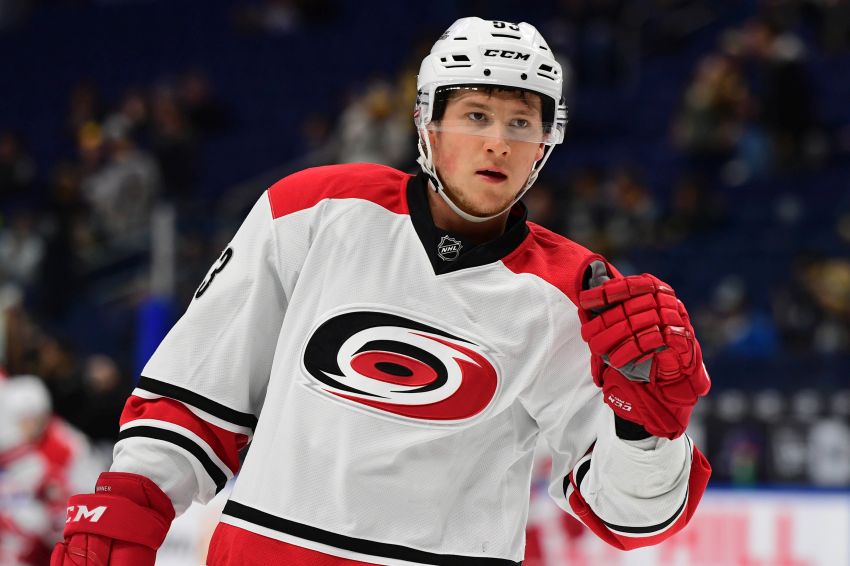 Before Thursday’s acquisition of slick winger Jeff Skinner, so many of the Buffalo Sabres’ trades throughout their seemingly endless rebuild focused on the future. Deals would often net them prospects or draft picks, a sign winning wasn’t imminent.

But Sabres general manager Jason Botterill made a different swap to nab the three-time 30-goal scorer from the Carolina Hurricanes. For one of the few times in recent years, the Sabres dealt futures for a proven commodity.

To acquire one of the NHL’s best goal scorers, the Sabres only dished forward prospect Cliff Pu, a second-round pick in 2019 and third- and sixth-round selections in 2020.

“What’s exciting about this trade here for our group is it’s not just all about futures,” Botterill said on a conference call Thursday night, hours after he completed a rare August trade. “Here’s a player that comes in right away and helps our team right away. “I think that’s going to get our National Hockey League players right now excited.”

In an age of parity, dreadful teams can turn things around quickly. Just last season, the Colorado Avalanche made the playoffs a year after finishing dead last.

“That’s part of our sport right now, the parity that’s in the National Hockey League,” Botterill said. “You always have an opportunity at the start of the year. We’ve made a quite a few adjustments to our team and we’re excited about … some of the young players coming into our group. Now it’s important that our guys step up. …

In the midst of a disastrous season regarded as the worst in franchise history, Botterill vowed to remake the Sabres. So far, he has added seven new faces via trade or signing this offseason. He also drafted Rasmus Dahlin, perhaps the best defense prospect in decades, first overall.

The Sabres sorely needed an established scorer like Skinner, who’s entering the final season of his contract. The Sabres, the NHL’s lowest-scoring team last season, needed to replace the offense they lost when they traded center Ryan O’Reilly to the St. Louis Blues on July 1.

“Our even-strength scoring over the last couple years in Buffalo has to improve, and one of his strengths, he’s a consistent goal scorer in the National Hockey League, and he creates a lot of chances at even strength,” Botterill said.

When the Sabres traded for Conor Sheary on June 26, it was assumed the youngster would be center Jack Eichel’s left wing next season. But that coveted spot might belong to Skinner now.

“We think there’s a great opportunity for him to play with Jack or Casey (Mittelstadt),” Botterill said. “We’ll leave it up to Phil (Housley) to see where that all falls out come the start of the season.

“But what gets me excited as a general manager is we’re at least giving our coach options to go out there and put out lines that are hopefully going to contribute offensively.”

Carolina GM Don Waddell said on a conference call Skinner and the Hurricanes agreed a trade would be best for the former Calder Trophy winner following last season.

His production has dipped and swelled over the years. He scored a full-season low 18 times in 2014-15. He rebounded with a 28-goal campaign, then enjoyed a career-best season in 2016-17, scoring 37 goals.

“I respect his work ethic a lot off the ice, just his professionalism, how he goes about handling himself … a true professional from that standpoint,” Botterill said. “We’ve talked a lot about our group being more competitive, playing with more pace, and that’s right up Jeff’s game.”

Botterill said the Sabres haven’t discussed an extension with Skinner.

Considering Skinner’s scoring prowess and age, they gave up very little for him.

Pu, a third-round pick in 2016, morphed into a strong prospect and could have a future in the NHL. Yes, the Sabres traded a second-rounder, but they have three first-rounders in 2019 if conditions are met.

In other news, Botterill said he has no update on winger Sam Reinhart’s contract talks. Reinhart is the Sabres’ last restricted free agent.