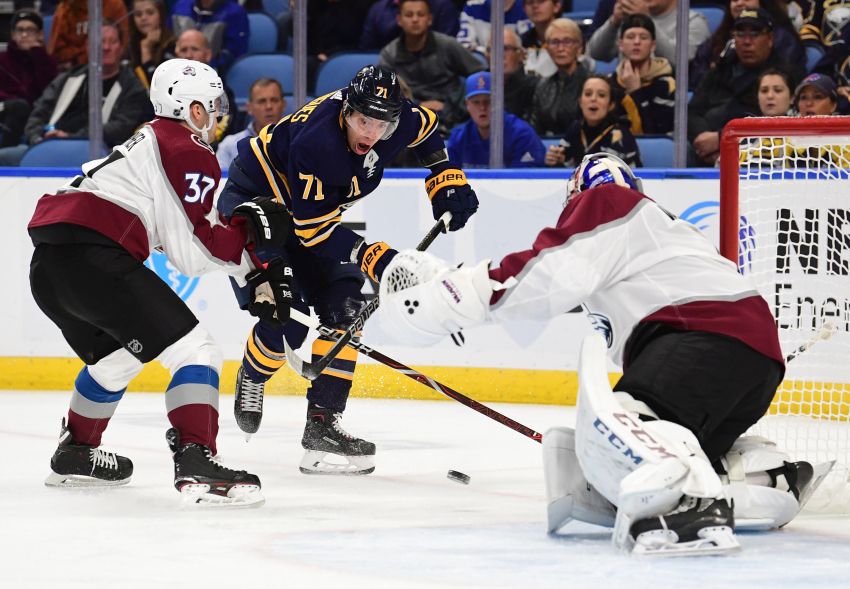 Throughout the short season, the Sabres had been dialed in and ready, according to Okposo. But fresh off two straight wins, he said they looked sloppy during Wednesday’s session.

“It was a lot like how we played the first period,” an agitated Okposo said after the Colorado Avalanche shellacked the Sabres. “We weren’t crisp.”

The Avalanche annihilated the Sabres early before a crowd of 15,396 inside KeyBank Center, opening up a 3-0 lead by the 16:30 mark thanks to two power-play goals.

Looking back, Okposo regrets not speaking up about the poor practice.

“It’s on me for seeing it and not saying something before the game,” he said. “You could see it coming. It was just not being ready to go.”

What caused it? Well, perhaps the bit of prosperity the Sabres have been experiencing. Their two straight wins put them over .500 for the first time since January 2013.

“It just was feeling a little bit good about ourselves, I think,” Okposo said.

The NHL, of course, has little margin for error. The Sabres, who finished dead last a year ago, are still learning to win, coach Phil Housley said.

“If there’s anything we can take out of it, (it’s) that we can’t take anything for granted and everybody’s got to be pulling on the rope each and every day, especially in our games,” Housley said.

Having spent two years with the St. Louis Blues before signing with the Sabres, goalie Carter Hutton understands winning and said a grind can accompany it.

Despite getting blown out, the Sabres had their chances.

Okposo appeared to score a power-play goal late in first period, but officials overturned it after watching replays, ruling he interfered with goalie Semyon Varlamov.

“I knew it was going to be probably a 50-50 one,” Okposo said. “I don’t even know how it went in. I don’t think me being there really affected it.”

Sabres captain Jack Eichel said: “We battled back at the end of the first and have some momentum and unfortunately it’s goalie interference.”

The Sabres’ power play went scoreless in seven tries, including two early ones that could’ve swung the momentum.

“The first two, I really liked what we were doing,” Housley said. “We were moving the puck, we were getting shots, we had some good net-front presence. But in the second period we got away from it.”

After Sabres defenseman Nathan Beaulieu scored 17:05 into the second period, superstar Nathan MacKinnon answered 28 seconds later, beating Hutton thanks to some help from an official.

By the end, the Sabres weren’t doing anything well. The breakaway goals MacKinnon and center Alex Kerfoot scored in the waning minutes irritated Okposo.

In the first week of the season, Hutton has been arguably the Sabres’ best player. Okposo knows his teammates shouldn’t have hung him out to dry.

“It was (expletive), we can’t do that,” Okposo said. “There’s no excuse for that. You give up two breakaways at the end of the game like that after he battled the way he has four four games, that’s unacceptable.”

After closing a four-game home stand to open the season, the Sabres begin a five-game, 10-day road trip Saturday in Arizona. They don’t play at home again until Oct. 25 against Montreal.