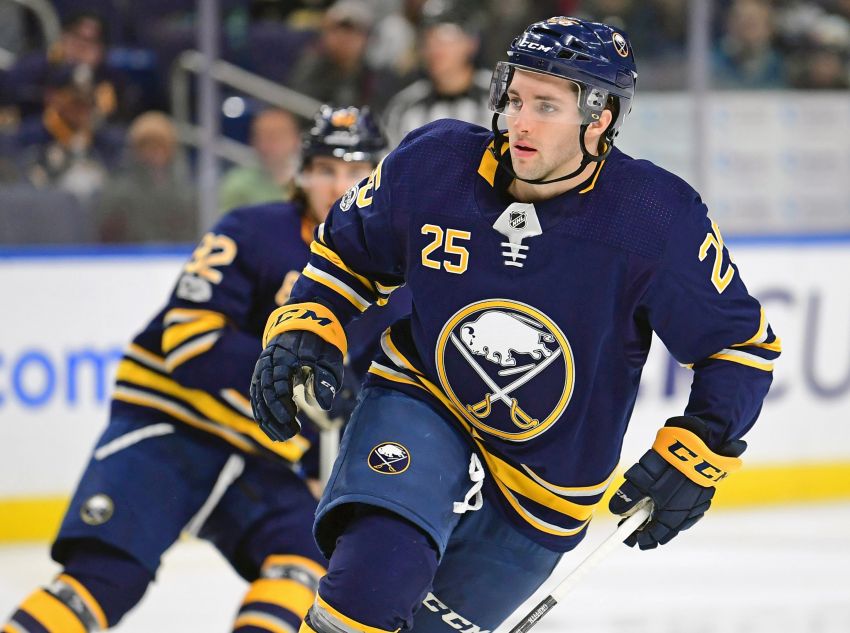 BUFFALO – Sabres center Jacob Josefson is out four to six weeks after tweaking the ankle that recently sidelined him, coach Phil Housley said. Winger Seth Griffith, meanwhile, cleared waivers today and was assigned to the AHL.

So, does that mean a forward will be recalled from the Rochester Americans? Housley said that would be decided Tuesday.

For now, winger Matt Moulson, a healthy scratch the last six games, is slotted to return for Tuesday’s home tilt against Tampa Bay. Moulson, 34, has zero points in 12 games this season.

Moulson, who practiced at left wing beside center Kyle Criscuolo and Zemgus Girgensons today inside HarborCenter, has a spot on the power play.

Josefson looked impressive after returning from a 15-game absence Wednesday, pivoting the fourth line with Jordan Nolan and Kyle Okposo.

“It’s tough, the way he came and the way he was skating, and that line in particular, with Nolan and Okposo, was really showing some good signs of contributing offensively,” Housley said of Josefson’s play over two games.

Josefson was injured in Saturday’s 3-0 loss in Montreal. Griffith also played that night, his return after sitting out two contests as a healthy scratch.

Griffith’s strong training camp earned him a roster spot. But the AHL star mustered only two goals and three points in 18 NHL appearances.

“He certainly had a really good opportunity,” Housley said inside KeyBank Center. “I just thought a lot of his compete in his game, and also he’s a really gifted scorer, talented and very fast. A lot of the games that he really had an opportunity to take a hard look and had open ice to make a play or shoot a puck, he was almost looking to pass.

“We’ll see how he reacts after this practice,” he said.

A lower-body injury has sidelined Bogosian since late in training camp.

Housley revamped his struggling power play today, spreading out players from the first unit. The Sabres’ 30th-ranked power play is scoreless in 15 tries over the last five outings.

The units from forwards to defense:

“It’s been a little bit stale lately, not to say that we haven’t had chances on the power play, because we’ve had quality looks,” Housley said.