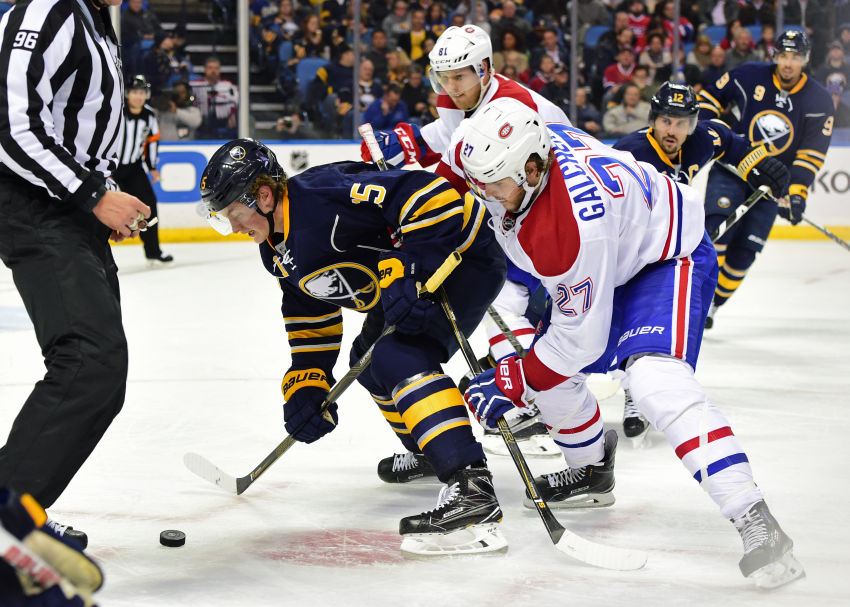 BUFFALO – Just like the old days. For stretches Friday, it felt like five or 10 years ago as the Sabres’ talent overwhelmed the NHL’s best club, the undefeated Montreal Canadiens.

After falling behind 2-0 early, the Sabres roared back, tying the entertaining tilt just over halfway through. The crowd inside the First Niagara Center sensed something special could happen.

Then, just as quickly as it started, the Sabres imploded for the first time this season, allowing five unanswered to close an ugly 7-2 shellacking from the Canadiens before a bipartisan crowd of 18,214 fans.

How good are the Canadiens? They became the second team in NHL history to begin a season with eight straight regulation wins, joining the 1975-76 Sabres.

Against the NHL’s best team, the Sabres had no margin for error.

“You’ve got to play the right way the whole way through, and too many times tonight, collectively as a group, we just made mistakes,” Sabres defenseman Josh Gorges said.

Those mistakes – breakdowns, penalties, lost faceoffs and poor goaltending – burned the Sabres, who allowed three third-period goals, including a power-play score 27 seconds in that essentially sealed the game.

“It snowballs in the third period,” Sabres coach Dan Bylsma said. “It’s disappointing, because I think we fought our way back in that game. Certainly, at that time we had some opportunities to go ahead and don’t take them.”

After Dale Weise and Brendan Gallagher put the Habs up 2-0 by 45-second mark of the second period, the Sabres tied it up by the 11:04 mark, getting a Matt Moulson score and a Ryan O’Reilly power-play goal.

But despite some great chances, the Sabres couldn’t get ahead.

“That’s going to happen,” Gorges said. “We can’t let it affect us. If we’re getting chances and we’re not scoring, the game is still 2-2.”

To make matters worse, shaky goaltending hurt the Sabres for the first time this season.

Chad Johnson had subbed superbly for injured starter Robin Lehner, giving the Sabres a chance to win every contest. But the backup looked terrible at times Friday, making only 19 saves.

“We left Johnson out to dry tonight,” O’Reilly said. “He stood on his head all year for us. We have to be sharp.”

What will Bylsma do tonight when the Sabres host the New Jersey Devils? The Sabres recalled rookie Linus Ullmark, arguably their top goalie prospect, prior to the game to back Johnson up. Nathan Lieuwen went down and allowed seven goals Friday in Rochester before getting yanked.

Bylsma said he hadn’t made a goaltending decision yet. Ullmark, 22, had surgery on both hips in April and has only played three games in North America.

Whoever’s in goal, the Sabres are happy they have a quick opportunity to shake off their ugly loss.

“This loss (stinks),” Gorges said, “but we don’t have time to sit and feel sorry for ourselves. We’ve got to park this … and we’ve got another tough match.”