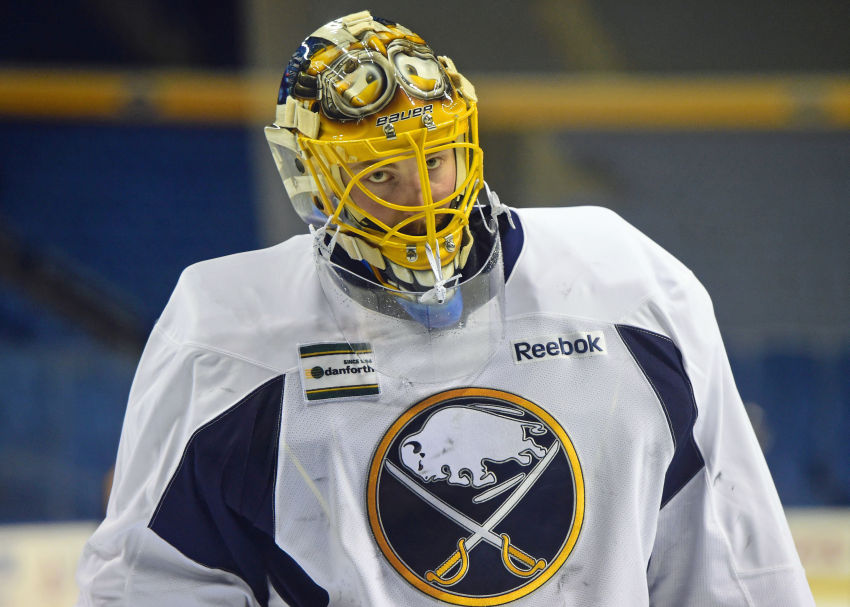 “We called him up so that he could get an opportunity to play, whether that was tonight, last night or later on next week,” Bylsma said this morning. “He was going to get a chance to play. Tonight’s it.”

The 6-foot-4, 212-pound Ullmark, who was summoned Friday, will make his first NHL start tonight against the New Jersey Devils inside the First Niagara Center.

The Swede, 22, just returned to game action after surgery on both hips in April. This will be only his fourth appearance in North America.

Still, Ullmark dazzled in three AHL starts with the Rochester Americans, going 1-2 with a 2.72 goals-against average and a .932 save percentage. He stopped 38 shots in his debut and 43 on Wednesday.

“I’m excited to see him play,” he said. “He looks good and solid. I know … in all three of the games that he played, the report was that he was the best player on the ice.”

He added: “Those three games were big for him in his development.”

Will Ullmark be nervous tonight?

“Of course, you’re always nervous for your first game,” he said.

Ullmark, a 2012 sixth-round pick, doesn’t know when those nerves will calm down.

“Sometimes it settles right after you make your first save,” he said. “Sometimes it keeps on going through the third period. I don’t know how it’s going to be tonight, but I hope it’s going to get settled down as soon as possible.”

Bylsma said Johnson, who looked sharp in seven straight appearances, doesn’t have any fatigue in his game.

Bylsma said the rest of the lineup will be announced at game time. The Sabres had an optional skate this morning.