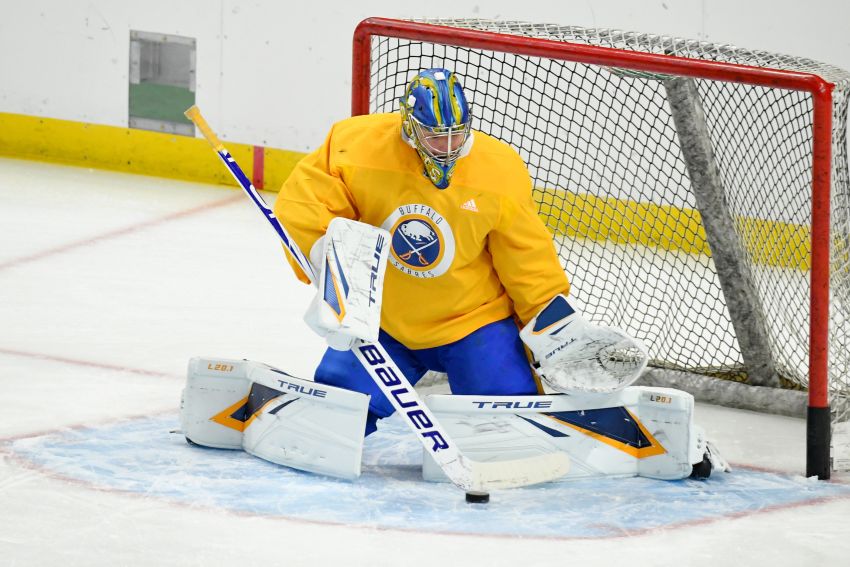 BUFFALO – After allowing five goals on opening night, Sabres goalie Carter Hutton settled down, letting in just two over the next 100 minutes.

Fresh off a 10-month break, Hutton looked sharp and appeared poised to keep earning playing time. But Hutton left Tuesday’s 3-0 road loss to the Philadelphia Flyers early after getting hit in the head.

Hutton, 35, is day to day, coach Ralph Krueger said, and did not accompany the Sabres to Washington, where they begin a two-game series tonight against the Capitals.

Meanwhile, Hutton’s goalie partner, Linus Ullmark, missed the last two games following the death of his father. While Ullmark practiced Thursday inside KeyBank Center and traveled with his teammates, his status for the Washington series is unclear.

Goaltending, of course, was arguably the Sabres’ biggest question mark heading into the season. Despite some excellent play for stretches, Hutton and Ullmark haven’t established themselves as No. 1 NHL goalies.

Now, after just four games, the Sabres’ depth is being tested.

Third-string goalie Jonas Johansson, who allowed one goal in relief of Hutton, could play this weekend. The Sabres elevated him from the taxi squad Monday.

They also promoted veteran Dustin Tokarski from the Rochester Americans to the taxi squad Thursday. Tokarski, 31, has played 39 total NHL games, his last appearance coming in 2016-17.

Johansson, 25, has developed into an intriguing prospect. He played his first six NHL games last season, compiling a 1-3-1 record. A breakout season in Rochester – he registered a 2.24 goals-against average and a .921 save percentage – helped him morph into an AHL All-Star and crack the big leagues.

“That’s absolutely a boost for myself to work harder,” Johansson said of his first NHL action. “I know what’s ahead, I know what I need to do and how to prepare so that’s definitely a boost just for my confidence and the way I try to approach this year.”

In a normal year, Johansson would likely be playing in Rochester with Tokarski or Ukko-Pekka Luukkonen, Buffalo’s top goalie prospect.

Johansson, Krueger said, needs more seasoning. He sat idle until October, when the Sabres loaned him to the Krefeld Penguins, a team in the Deutsche Eishockey Liga, Germany’s top pro circuit.

He played three games in the Magenta Cup, a preseason tournament, allowing six goals on 92 shots. Before Monday’s appearance, he hadn’t played a game since Dec. 1. He struggled early in training camp.

Krueger, who lauded Johansson’s professionalism and work ethic, said the Swede is a “strong project” for assistant coach Mike Bales, who’s in charge of the goalies.

“(Bales) really is somebody that will find the potential of each and every one of our goalies,” Krueger said on a Zoom call following Thursday’s practice. “He just needs to build on his confidence now and continue on his path. The experience of being with us now and being on the bench and getting some minutes again came at him probably earlier than he expected this year, but we’ve liked having him around.

“What we’ve liked is his fundamentals. What we’ve liked is the foundation and the character is very high. He’s a great teammate and he’s got an exciting future. He has to continue on this path and keep working and combined with games here and games in Rochester, we need to get him experience. That’s the next piece in the puzzle.”

If Hutton returns soon and Ullmark remains healthy, the Sabres could assign the 6-foot-5, 220-pound Johansson to the Amerks. The AHL season is scheduled to start Feb. 5.

Tokarski, who’s in his 12th pro season, would be the logical choice to keep serving as the taxi squad goalie.

Ex-Sabres forward Matt Ellis, the team’s director of player development, runs the taxi squad, a group of extra player the NHL implemented because of the COVID-19 pandemic.

“They’re all great guys, the players,” said Johansson, a third-round pick in 2014, 61st overall. “We really push each other and work hard every day. We’ve got a great coach in Matt Ellis, who is really experienced and he has a lot of good drills we do in practice.

“Just the main focus (is) to have everyone prepared because you never know what’s going to happen. Everyone can get in at some point so you’ve just got to stay prepared.”

NEXT: @NicholasLippa goes #BehindTheBench to talk how #COVID19 is already a factor in the @BuffaloSabres early season schedule. https://t.co/bSE1wmtdEl