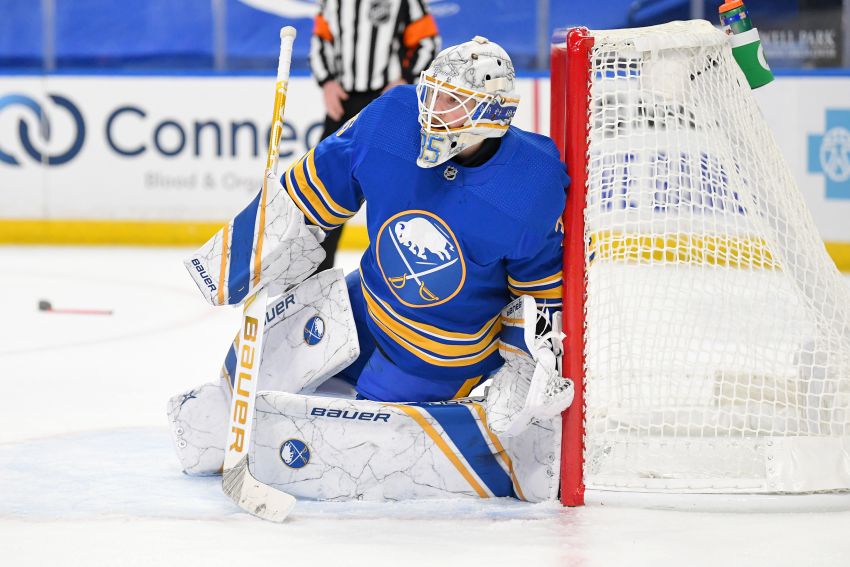 Goalie Linus Ullmark was supposed to play that night, but after he learned his father had passed away earlier in the day, he and the coaches decided he should take some time off.

Ullmark, 27, stayed with the team, and when Eichel got up, he presented the Swede the game puck from the Sabres’ first victory this season.

“When they gave me the puck, it took all my might and my power to not break down completely in the locker room,” Ullmark told Sabres.com. “We’re always speaking that we have two families. We have a family at home and we have our family in the team. That certainly was one of the confirmers about how I feel and hopefully how they feel about the team.”

“You can see we are a club built on good people and it means a lot to us,” Krueger said on a Zoom call following Thursday’s practice. “I think these situations test out mettle and thus far I’m really proud of the way the team and Linus are dealing with it.”

He added: “He’s been as strong as possible in the situation.”

Eichel said Ullmark is “part of our family here.”

“That’s what we are, we’re a group, one big family in that locker room,” he said. “More than anything, we care about each other. It’s just one of the guys going through a tough time and you just want to be there to support him.”

Ullmark practiced Thursday inside KeyBank Center and accompanied the Sabres to Washington, where they begin a two-game series tonight against the Capitals.

Before the Sabres started Thursday’s session, Ullmark revealed to the team’s website he had lost his father, who entered the hospital early last week. He was 63.

Ullmark said after Monday’s morning skate – “I had my worst pregame skate in my whole life, probably,” – he said – he checked his phone and saw a missed call from his mother.

The Sabres announced Monday that Ullmark wouldn’t be available because of “personal reasons.”

The 1-3 Sabres, who lost twice to the Capitals last week, have caught a huge break.

The Capitals will be without superstar Alex Ovechkin, No. 1 goalie Ilya Samsonov, center Evgeny Kuznetsov and defenseman Dmitry Orlov for the next four games because the players violated the NHL’s COVID-19 protocols.

The Russians gathered in the same hotel room and did not wear masks, according to The Washington Post. Samsonov tested positive for COVID-19, according to the newspaper.

“There was a positive case and through their tracing and their tracking the players were honest with what they did,” Capitals coach Peter Laviolette told reporters in Washington.

Winger Kyle Okposo practiced as an extra Thursday and accompanied the Sabres to Washington. A lower-body injury he suffered in the team’s second scrimmage has sidelined Okposo the first four games.

If Okposo can’t return tonight, he’d like to play Sunday.

Sabres goalie Carter Hutton, who left Tuesday’s 3-0 loss in Philadelphia after getting hit in the head, did not travel to Washington.

“We’ll assess him when we get back,” Krueger said. “It’s important he gets some rest.”

The Sabres sent forward Rasmus Asplund, who made his season debut Tuesday, back to the taxi squad Thursday.