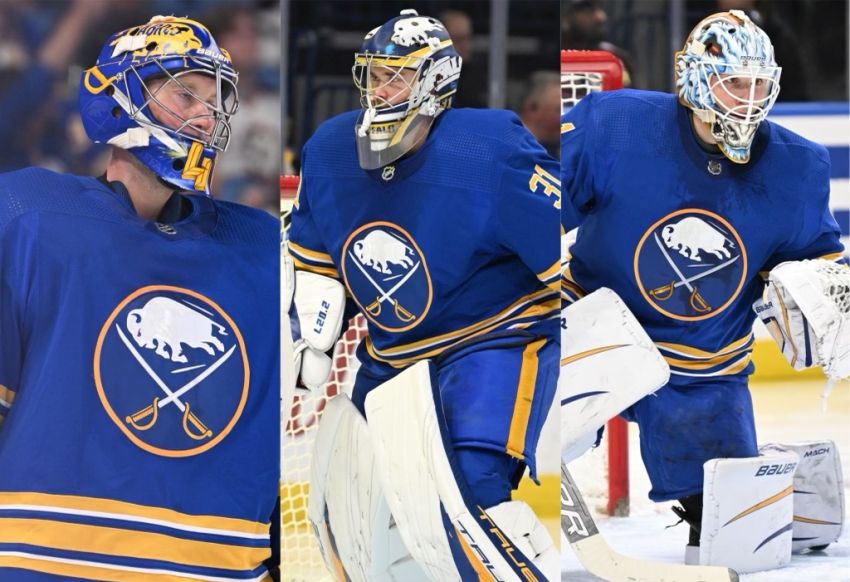 BUFFALO – So far, the Sabres’ jam-packed schedule has helped them make the best of a difficult situation and accommodate three goalies.

This week, Craig Anderson, Eric Comrie and rookie Ukko-Pekka Luukkonen have all earned starts. Luukkonen remained on the roster following Thursday’s 4-2 loss to the Winnipeg Jets, a sign he could play tonight’s road game against the Nashville Predators.

The Sabres also play Monday, Tuesday, Thursday and next Saturday. They have nine games over the next 15 days.

So until the end of January, they play enough to possibly keep everyone happy.

“The situation is more challenging as it goes forward,” Sabres coach Don Granato said following Friday’s practice at KeyBank Center. “Fortunately, in this case we play lots of games in the next two and a half weeks. But everybody wants to play. … Their next game is probably some point soon by virtue of our congested schedule. …

“It’s challenging to have three typically when you don’t have a lot of games. We’ll see how it goes every day forward from here.”

Since Comrie returned from his conditioning assignment on Monday, the Sabres have been making paper transactions to manage the 23-man roster and keep three goalies in the mix.

None of the players left Buffalo. On Wednesday, the Sabres lost defenseman Casey Fitzgerald on waivers.

Until the Sabres suffer an injury or make a trade, they might keep “assigning” young players to the minors to create room. Krebs, Luukkonen, Quinn, winger JJ Peterka and defensemen Owen Power and Mattias Samuelsson are all waiver-exempt.

They almost certainly wouldn’t use Power and Samuelsson for a paper transaction. Others, however, have been key contributors.

Krebs set up winger Victor Olofsson’s overtime goal in last Saturday’s thrilling 6-5 win against the Minnesota Wild. Quinn, while he has been slumping, has stood out at times this season, scoring six goals and 17 points in 33 games.

“The message we want to send is we’re in it to win the next game,” Granato said of the Sabres using waiver-exempt youngsters to make roster space. “So when we feel it conflicts with that, decisions will be based with that winning. The other tier right under winning is we know we have to get better to win more games in the future, you need to keep getting better and better. That’s by design why we have one of the youngest teams in the league.”

The Sabres decided earlier this week that Quinn, 21, and Peterka, a rookie who turns 21 today, needed to take a step back and sit out two games. Peterka has remained on the roster. They’re expected to play against the Predators.

“Everything we do is geared toward winning,” Granato said. “Development, we feel, is hugely impactful to winning more consistently. We have four guys who don’t need waivers. At this point, we’ve shifted day to day with that, thinking of Quinn and Peterka stepping back as developmental opportunity. When we will feel that’s not a developmental opportunity, that’s when we’re going to have another decision to make.”

So for now, the Sabres have three goalies who get along vying for playing time.

“Everybody wants to play,” said Anderson, who did not dress for Thursday’s game. “… Having the desire and the drive to be the guy, when you have healthy competition, that just drives everybody to play a little bit better. It’s no different when you’ve got two guys going than you got three guys going. It’s just make sure you get enough work that you feel good.

“When a guy gets on a run, you’re happy for him. It makes you hungrier to make sure you get an opportunity to get a chance to go on a run as well.”

A surfeit of netminders also offers opportunities. Anderson, having enjoyed a decorated 20-year career, is an incredible resource. Comrie, 27, and Luukkonen, 23, have played a combined 76 NHL games. Anderson has played a whopping 698 games.

“Andy’s unbelievable for myself and Upie, the amount of experience he has, the amount of things he’s seen,” Comrie said. “… When he gives little advice and little tips here and there, it’s amazing resource for Upie and I to have.”

Luukkonen said: “I can learn from both of them. You try to make the most of out of the situation. It’s not, I’ve said, maybe not optimal, but there’s positives to it, too.”

Granato said Sabres winger Zemgus Girgensons is sick and did not make the trip to Nashville. Meanwhile, winger Alex Tuch sat out Friday’s practice for maintenance.