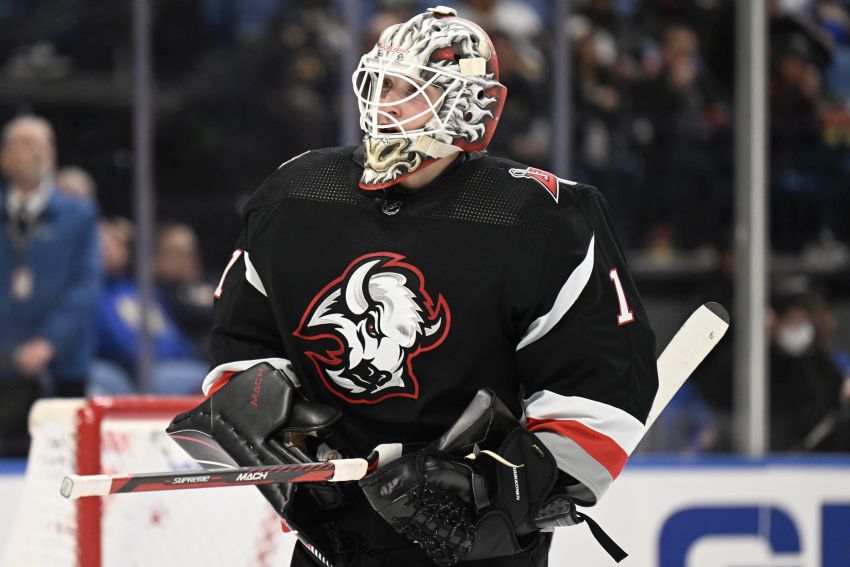 BUFFALO – By loaning goalie Ukko-Pekka Luukkonen to the Rochester Americans to create a roster spot for Eric Comrie, the Sabres bought themselves some time.

Right now, the Sabres have a full 23-man roster. If they wanted to activate Comrie from injured reserve and keep Luukkonen, they might’ve had to waive a young defenseman and risk losing him.

The Sabres can send Luukkonen, 23, to the AHL without waivers, so his assignment on Monday likely amounts to a paper move. The Finnish rookie, who has won six straight games and eight of his last nine, is expected to be recalled and start tonight’s contest against the Seattle Kraken.

General manager Kevyn Adams said prior to Monday’s 4-0 loss to the Philadelphia Flyers to expect daily roster movement as the Sabres try to keep three goalies. They will also likely need to add defenseman Henri Jokiharju, who’s progressing from a lower-body injury, to the roster in the coming days.

To summon Luukkonen, they’ll have to do more maneuvering.

Adams said carrying an extra goalie is challenging but realistic.

“We’ll figure out a way each day to kind of see what the day brings,” he said in KeyBank Center. “But … I don’t want to look too far ahead. This is going to be a daily kind of roster management discussion. But we’re constantly having that. We’ve been having that for a few days as Eric was getting closer.”

Still, Adams said the goaltending depth is a good problem. In his first two seasons as GM, the Sabres ran out of netminders and had to quickly sign one.

“There’s a lot of things in this job that are challenging, but this is great,” he said. “We have three guys now that are healthy, that we believe in. We really like where UPL’s game is right now, the way he’s progressed and developing and the games he’s played. Tough buildings, tough teams. He looks like he’s got a calmness to him and there’s a confidence that our group has playing in front of him. …

“We’re going to go day by day here. We’re going to make it work, figure it out. But for us the key on the UPL part is we really like where he’s at and we want to see him keep getting reps and minutes here.”

Considering the Sabres’ loaded schedule this month – Monday’s game was the second of 13 over a 22-day dizzying stretch – playing time will probably be available for all of them.

The Sabres play on Monday, Tuesday, Thursday and Saturday for three straight weeks, so perhaps coach Don Granato can come up with a rotation.

After missing 20 games, Comrie, who suffered a lower-body injury on Nov. 16, backed up Anderson against the Flyers.

Comrie, 27, just completed a three-game conditioning assignment with the Amerks, compiling a 1-2-0 record with a 3.03 goals-against average and an .898 save percentage.

“Six weeks is a long time to be off, especially for myself,” Comrie said prior to Monday’s game. “I don’t take that much time off. So it was just good for me to get into some games and just get some reps and see the puck and see some plays.”

He had never started regularly in the NHL before signing a two-year, $3.6 million contract with the Sabres prior to the season.

“We have all the confidence in the world in Eric,” Adams said. “He’s come in and there were some games he was really good early. We were in a tough spot there with some of what we were going through on our roster through a stretch of those games. But we believe in him.

“We really think that he’s everything we thought we were going to get when we signed him in terms of how he’s integrated into the team and the locker room and the culture of what he does every day and his work ethic is off the charts.”