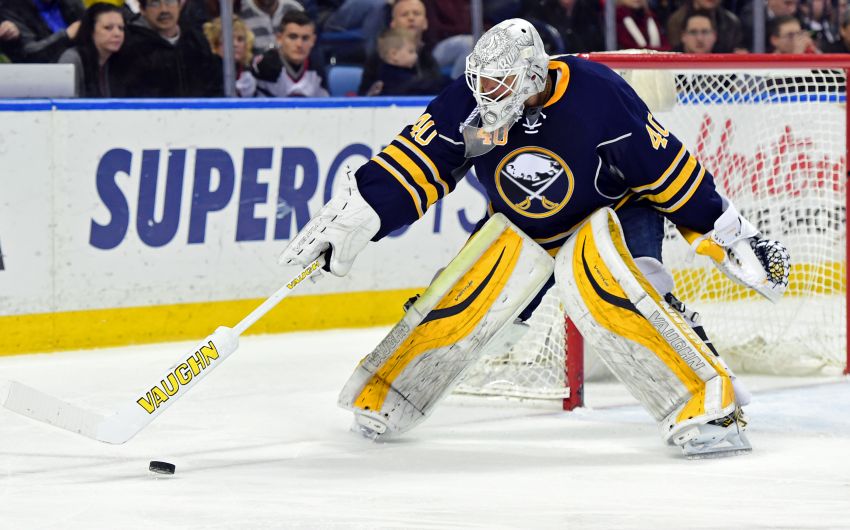 BUFFALO – If the Sabres were still in the hunt for the postseason, then perhaps goalie Robin Lehner would’ve battled through his ankle injury and kept playing, coach Dan Bylsma said.

“I can’t say that for sure,” Bylsma said this morning. “It might’ve been the case if we were in a different spot in the standings right now and fighting for a playoff spot.”

Instead, Lehner underwent season-ending surgery this week. The Swede, 24, suffered a high right ankle sprain opening night and missed three months before returning for a strong 20-game run. He jammed his tender ankle into the post twice in a week earlier this month.

While Lehner looked impressive in limited action, his season is still a huge disappointment. The Sabres traded a first-round pick to Ottawa for him to be their 60-game starter. After getting injured Oct. 8, he didn’t play again until Jan. 15. He last played March 16.

“Once he rehabbed, once he got back to playing, he showed, especially in that 10-game segment (in February and early March), he showed us quite a bit, what kind of goalie he can be,” Bylsma said.

Goalie Chad Johnson will make his seventh straight tonight against the Toronto Maple Leafs inside the First Niagara Center. Johnson, who has looked like a No. 1 most of the season, is gunning for his first 20-win season.

In other news, Bylsma said winger Evander Kane’s season is over. Kane suffered an upper-body injury Monday and needs two to three weeks of recovery.

Bylsma also said winger Tyler Ennis, out since Dec. 30 with a concussion, could still play this season. Five games are left. Ennis still hasn’t started practicing but has been skating.

– The Leafs recalled four players from the AHL, including former Sabres defenseman T.J. Brennan, and sent four players down this morning. Brennan has enjoyed a monster AHL season, scoring 24 goals and 67 points in 67 games with the Toronto Marlies.

Brennan, 26, played 21 games with the Sabres. Tonight will be his 48th NHL appearance.