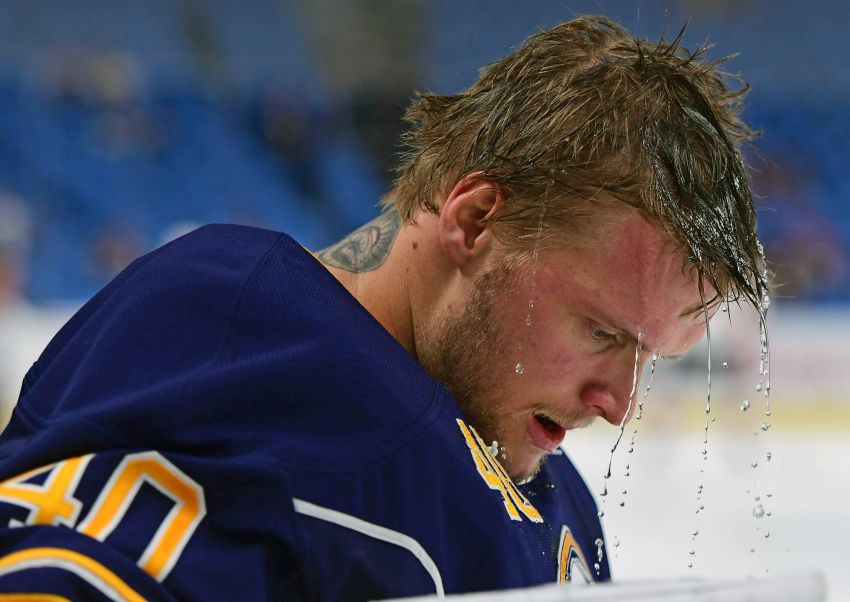 Goalies Anders Nilsson, Lehner’s sub, and Linus Ullmark also practiced today. Lehner, who spent four days off the ice, also skated before the regular session. He said he was better Thursday but the team kept him away because of the infection risk.

Saturday morning update: Bylsma said Nilsson will make his third straight start this afternoon. Lehner will back him up. Ullmark has been sent back to the AHL.

“I feel good,” Lehner said. “I had a good practice. It sucks. I really want to play right now. I felt like I was making strides.”

Lehner started the first four games. Bylsma said the Sabres will wait to send Ullmark down.

In other news, Sabres center Jack Eichel, out since sustaining a high left ankle sprain Oct. 12, is no longer wearing a walking boot.

“I don’t know exactly what his exercise level that he moved to, but I know he was walking in the boot for a few days before yesterday,” Bylsma said.

“There’s nothing really cemented,” he said.

The Sabres said Kane would be sidelined “weeks” after he was injured Oct. 13.

Don’t expect Sabres defenseman Dmitry Kulikov to get too emotional about facing the Panthers for the first time since the June 25 trade that brought him to Buffalo.

“I’m sure it’s going to be a little weird, but it’s something I have to deal with,” Kulikov said. “It doesn’t matter what happened before.”

Kulikov, 25, spent his first seven seasons in Florida. The Sabres dealt defenseman Mark Pysyk and swapped picks for him.

The Russian no longer pays attention to the Panthers.

“I like to be in the moment,” he said. “Playing for Buffalo now, it’s all about here and now. Obviously, I had a good time in Florida. I’ve had a good start to me career and a good seven years. But, no, I don’t really follow it anymore.”