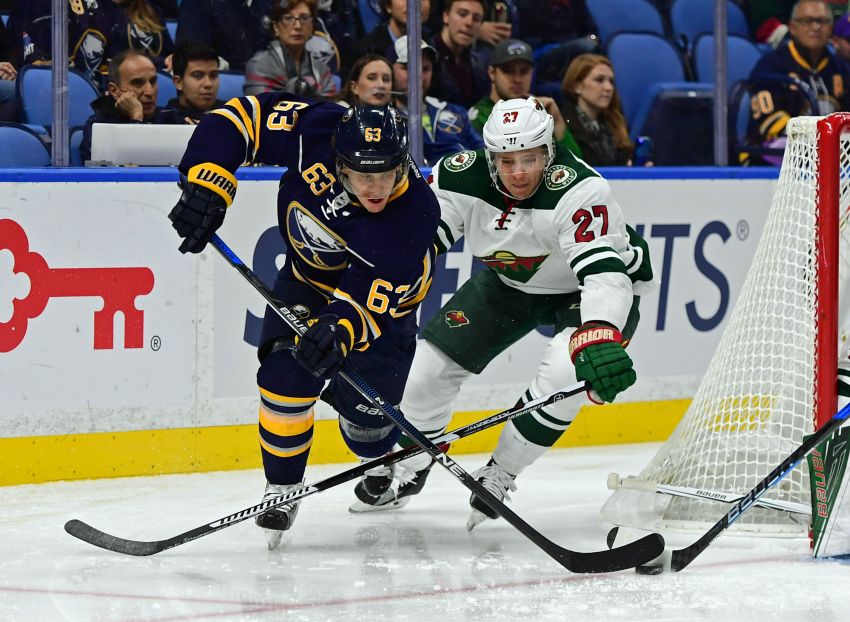 BUFFALO – Just six games in, it already feels like past seasons. The Sabres are going nowhere fast again. Thursday’s embarrassing 4-0 loss to the Minnesota Wild, their fourth straight defeat and fifth overall, proved that.

Few expected the Sabres would be this bad again, but two weeks into another trying year, they still rank among the NHL’s bottom-feeders.

Clearly, the Sabres carried Tuesday’s brutal 4-3 shootout loss in Philadelphia, a game in which they blew a three-goal, third-period lead, into Thursday’s tilt.

The Wild scored just 4:51 into the game and again at 15:13, getting goals from Joel Eriksson Ek and Jason Zucker.

“I didn’t like the start,” Sabres coach Dan Bylsma said. “I felt like we were squeezing our sticks a little bit … grinding the sawdust a little bit. We weren’t able to execute. We were just a little nervous with the puck.”

The Sabres pounced on the Wild in the second period, outshooting them 16-1 early. Still, the Sabres, who have scored just one goal in two home games this season, couldn’t convert.

“I think we finally took the reins off and played the way we needed to play,” Bylsma said. “That’s exactly how we need to play, and (we) got inspired, got tenacious, got on the puck.”

Sabres winger Tyler Ennis, who had nine shots, said: “That’s how important starts are. Even when you dominate the second period, double them up in shots, when you get down early, it’s so hard in this league to climb back.”

The Sabres outshot the Wild 19-4 in the second period and 11-4 in the third. But Ryan Suter’s goal 2:58 into the final period sealed it.

Not long after that, droves of fans in the crowd of 18,122 began leaving KeyBank Center.

Overall, the Sabres outshot the Wild 38-21. Does anyone care about that? Wild goalie Devan Dubnyk recorded his 21st career shutout.

“If we would’ve got one, it would have changed the whole feel of the game,” Sabres center Ryan O’Reilly said. “It would have tightened them up a bit. They get the third one and it’s tough to fight back from that.”

The Sabres scored six goals in their only win and have eight in the other five games.

Fans seem disenchanted. You can only sell hope for so long. After a long rebuild in which the Sabres became the NHL’s laughingstock from 2013-15, they want to see progress in the most obvious form: wins.

They expected more after a strong second half last season, the Sabres’ first under Bylsma. For the first time in years, the playoffs seemed real in 2016-17.

Angry fans booed as Thursday’s game progressed. Some made Twitter jokes about which prospect is available first overall in 2017 or called for drastic changes to be made.

“Losing is not acceptable,” he said. “We’re frustrated.”

How badly have the Sabres performed early in recent seasons? They’ve started the last four campaigns a combined 3-19-4 before winning their second game.

The Sabres have been an awful home team for years, and through two miserable October outings they’ve given their fans little to cheer about.

If the Sabres want to take a lesson out of the game, they only need to remember how the Wild played late.

The Sabres have lost four straight games for the first time since Feb. 4-11.