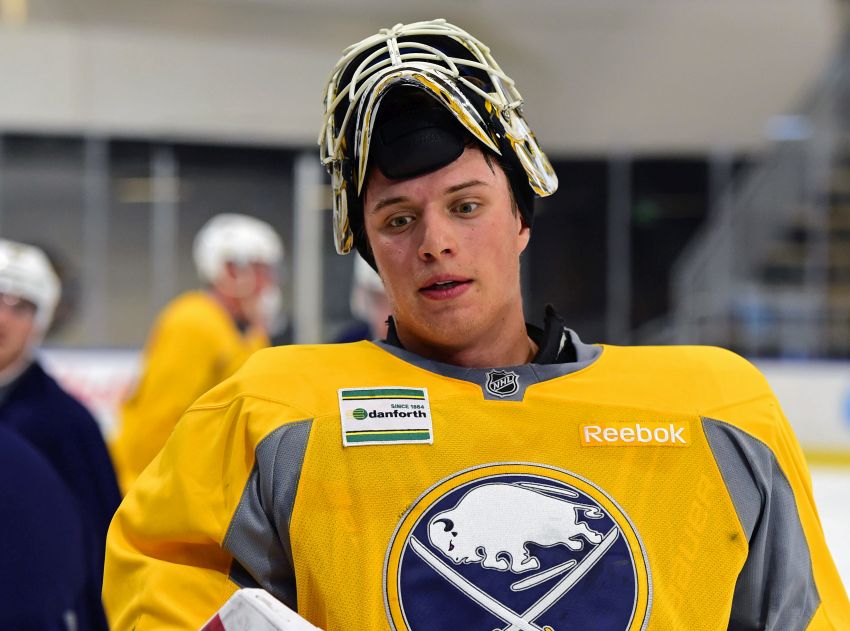 ROCHESTER – With the Buffalo Sabres boasting some of hockey’s best goalie prospects, it can be easy for Jonas Johansson to get overlooked.

After all, Linus Ullmark morphed into one of the AHL best goalies this season, becoming the Rochester Americans’ backbone and MVP. Two years into his North American career, the Swede looks ready to graduate to Buffalo.

The Sabres also own the rights to Notre Dame junior Cal Petersen, one of the NCAA’s top netminders. The 2013 fifth-round pick could be ready to leave school, although there is speculation he could opt to become a free agent.

Meanwhile, Johansson, 21, has quietly spent the last three seasons developing with Almtuna IS, a second-tier team in his native Sweden. The 2014 third-round pick, 61st overall, has also occasionally earned recalls to the SHL, the country’s highest league.

Johansson joined the Amerks on a tryout last month, and his first taste of the AHL has buoyed his confidence. In seven games, more than Johansson expected to play, he went 3-3-1 with a 2.85 goals-against average and an .892 save percentage.

“He’s a guy that’s capable, and it’s probably very, very important for him to have gotten these games,” coach Dan Lambert said Friday following the Amerks’ 5-4 win against the Albany Devils inside Blue Cross War Memorial.

Yes, Johansson compiled below-average numbers. But he believes he has adapted well to the smaller North American ice surface, what he called “the biggest adjustment.”

“It’s pretty cool to be here,” Johansson said. “Before I went (here), I was wondering if I could take it, because I know the guys were very good. But after I’ve been here for three weeks, four weeks now, I feel like I’m able to play at this level, and it feels great to have that with you in the future.”

Johansson, like the top three goalies in the organization – Robin Lehner, Anders Nilsson and Ullmark – is a big Swede. At 6-foot-4 and 204 pounds, Johansson is actually the “smallest” of the group.

He hasn’t met Lehner or Nilsson, but he knows Ullmark, one of three other Swedes on the Amerks, well.

“I’ve been with Linus since my first year, and it’s been great, like a mentor for me,” Johansson said. “It’s really comfortable to have other Swedes to talk to.”

Ullmark said Johansson is a “calm guy, just like every other Swede.”

“Big goalie, very skillful, fast,” he said. “The same thing for him (like me), he’s got to position his style to the North American style and make it work.”

Johansson said he tries “to play a butterfly game.”

“That was good for me because I got to play a lot of games,” he said. “That’s what you need when you’re a young goalie, just get the experience.”

With that experience, Johansson said his consistency has improved.

“I feel like it’s been better and better the older I get,” he said.

Johansson isn’t sure about his future. He hasn’t signed an entry-level contract yet. If Ullmark moves up or Petersen signs elsewhere, the Sabres could have an opening in Rochester.

Whatever happens, Johansson is slowly moving closer to the NHL.

“This is the closest I’ve ever been,” he said of the AHL. “This is the second-best league in North America.”