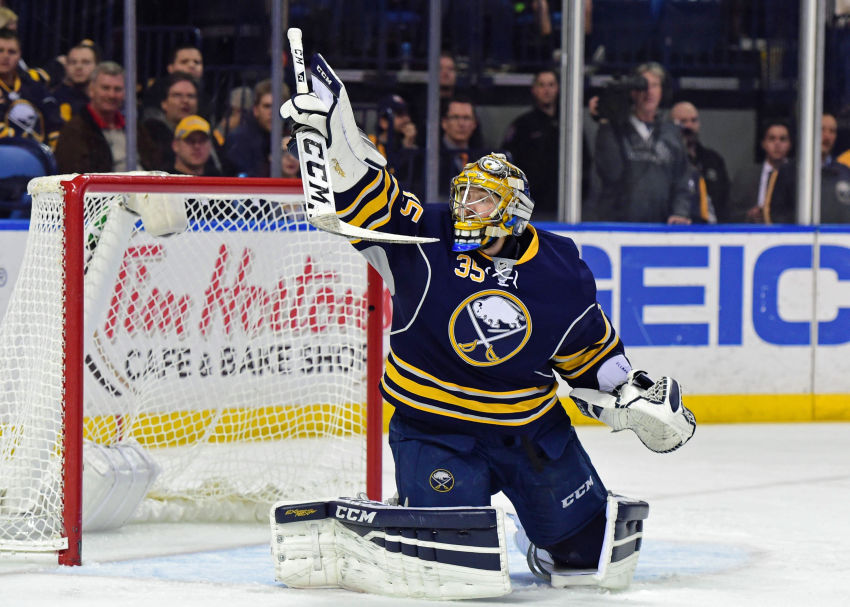 BUFFALO – Right now, Sabres goalie Linus Ullmark’s struggles are “mostly mental things,” the Swede said this morning. In his last six starts, the rookie is 0-4-2 and has allowed 18 goals. In his last three starts, his save percentage is .859.

Remember, Ullmark, who will start tonight against the Los Angeles Kings, dazzled early on, winning four of his first six starts.

“We know that my game works,” Ullmark said inside the First Niagara Center. “Obviously, we won games when I played. It’s just a mental thing.”

“I’ve been trying to play like I’ve been doing the first games,” he said. “It just hasn’t gone our way and my way. That’s just how it is. It’s just those small things that make you successful or not. It’s hard to say what’s wrong or what’s right in those games.”

Ullmark has clearly lost some of his composure in net, moving and flopping too much. Sabres coach Dan Bylsma believes Ullmark, who has made some big saves, has lost some consistency.

“Linus has the ability to be a game-changer, can make a spectacular save,” he said. “He has done that in his last starts. He’s gotten away from being consistent in the net throughout a 60-minute game. He’s had one or two get by him, sneak by him – ones he’d probably like to have. His last game, he had three or four outstanding saves, probably had one he’d like to have back.”

Ullmark and the Sabres lost 5-2 Monday in Vancouver.

Meanwhile, the Sabres, losers of three straight games, will face a Kings team that’s 7-0-1 in its last eight.

Old friend Jhonas Enroth, who played goal for the Sabres five seasons, will start for the Kings. The Swede hasn’t been back in Buffalo since the Sabres traded him to Dallas in February.

Returning is special for Enroth, who often said his dream was to be the Sabres’ starting goalie.