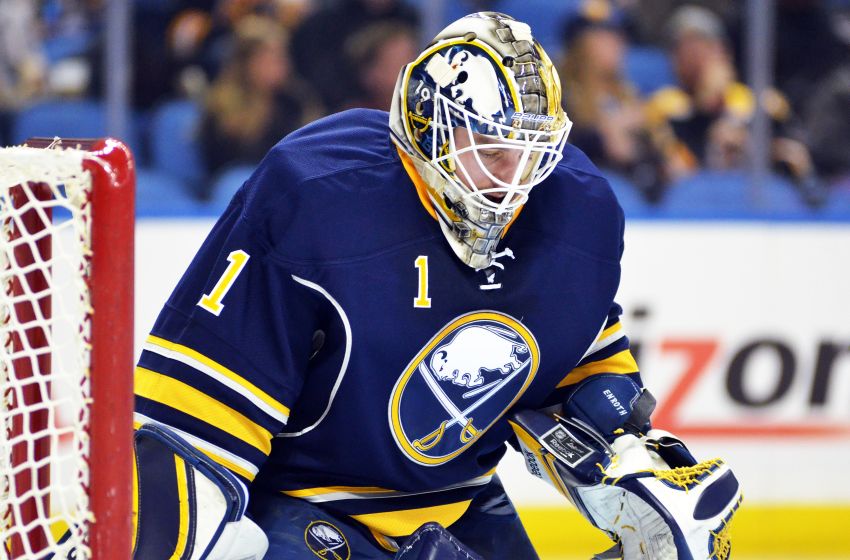 Jhonas Enroth will play most of the games down the stretch. ©2014, Dan Hickling, Olean Times Herald

BUFFALO – Ryan Miller is gone. Jaroslav Halak, the goalie the Sabres received in Friday’s blockbuster trade with the St. Louis Blues, will be an unrestricted free agent following the season. He could be dealt within days.

The 25-year-old Swede finally has an opportunity to become a No. 1 goalie.

“If you don’t call this a chance, then I don’t know what a chance is,” Enroth said Friday after making 36 saves in the Sabres’ 4-2 win against the San Jose Sharks. “I’m not going to try to put too much pressure on this moment. I’ll just try to be myself and stay professional.”

While Nolan, whose Sabres had Saturday off, said Enroth will play the bulk of the remaining 22 games, he wouldn’t declare a starter. He doesn’t know much about the 28-year-old Halak, who has played 260 NHL games.

“It depends on what comes back the other way,” Nolan said. “I’m not 100 percent sure yet. I just know what’s going out our way.”

Enroth’s fortune has changed quickly. Fresh off winning a silver medal at the Sochi Games, he won both starts last week. Remember, he hadn’t won since Oct. 25 before Wednesday’s 5-4 overtime triumph against Boston. He’s 3-12-5 with a 2.90 goals-against average and .906 save percentage in 22 games this season.

“I got to believe in myself so I’m a true believer I can be a No. 1 guy here,” Enroth said.

Miller was supposed to play Friday. Enroth was joking with trainers about trade rumors when Nolan told him he would be starting.

“I kind of jinxed myself or whatever you want to call it,” Enroth said.

He added: “I was more nervous than usual, kind of late notice. But I just told myself to relax and go out there and compete.”

Miller’s mentorship has meant a lot to Enroth.

“I’ve been fortunate to be sitting next to him for two or three years now,” he said. “One thing that really stands out with Ryan is his professionalism. He’s a professional. He prepares for practice and games every day.”