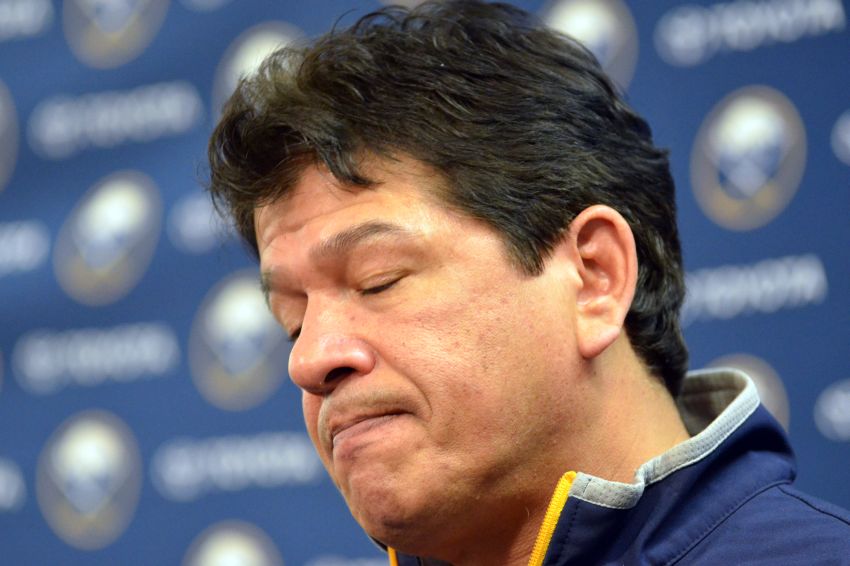 Ted Nolan has talked about a contract extension with the Sabres. ©2014, Dan Hickling, Olean Times Herald

“It’s tough,” an emotional Nolan said this morning inside the First Niagara Center. “I don’t even want to think about it right now, to tell you the truth. It’s that tough.”

Nolan hasn’t spoken to LaFontaine in the past couple of days and called his departure a “big surprise.”

Of course, now Nolan’s future here is in doubt.

LaFontaine brought Nolan back to the Sabres on Nov. 13, his first move as president. It appeared Nolan, who’s popular with his players and the team’s rabid fan base, would be awarded an extension at some point soon.

Nolan acknowledged he has talked to management about a contract.

Nolan sounded like someone who knows he’ll be moving on soon. He said he’s experiencing “emotional roller coaster.”

With the team undergoing a major overhaul – franchise goalie Ryan Miller and captain Steve Ott were traded Friday – he wants to concentrate on his players.

In other news, winger Chris Stewart, acquired in Friday’s blockbuster deal with St. Louis, will make his Sabres debut Monday in Dallas. Goalie Jaroslav Halak, the subject of trade rumors before he even landed in Buffalo, won’t play. Both practiced today.