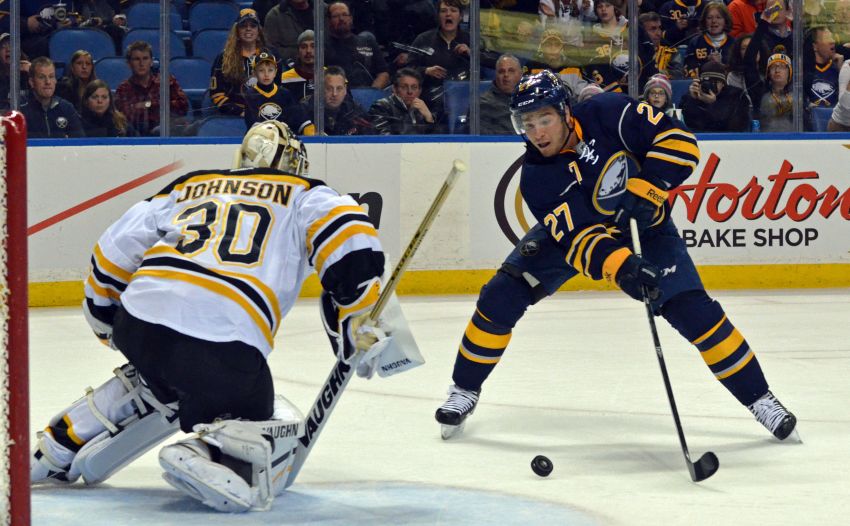 BUFFALO – Having just won an Olympic silver medal, Sabres goalie Jhonas Enroth could finally find some comfort in an otherwise miserable season. Sure, the struggling backup had just one win all year, but he had been Sweden’s No. 2 netminder behind Henrik Lundqvist, his idol.

Perhaps Enroth’s two weeks at the Sochi Games generated some much-needed confidence. The 25-year-old dazzled at times Wednesday, making some brilliant saves against the Boston Bruins before a capacity crowd of 19,070 fans inside the First Niagara Center.

“It only makes a guy better, gives the guy his confidence,” captain Steve Ott said following the Sabres’ dramatic 5-4 overtime win, Enroth’s first triumph since Oct. 25. “He was showing off his medal today. It was pretty amazing to hold it and see it. I’m just so happy for him to be a part of that team.”

Still, Enroth, the hard-luck loser all season, almost lost his 18th game. The Sabres blew a two-goal lead and fell behind late before Matt Moulson, whose high-sticking penalty led to Milan Lucic’s go-ahead goal, tied it with 53 seconds left.

But instead of mobbing D’Agostini, many Sabres rushed to congratulate Enroth, who hadn’t won in 124 days.

“It felt very nice to get a win finally again,” said Enroth, who made 29 saves, including a memorable pad stop on Loui Eriksson. “This was the kind of game I’ve had these games against me. It’s nice to get one of these for me.”

Interim coach Ted Nolan said the Sabres have been trying to create “a team-type of atmosphere.”

“They know how long it’s been for Jhonas to get that win,” he said. “You could see the way they went to him. It was a great sign.”

Goals from Zemgus Girgensons, Tyler Myers (power play) and Brian Flynn put the Sabres up 3-1 by 9:10 of the second period. The Bruins roared back, tying it before the period ended.

Why are two-goal leads so hard to protect?

“Once we get more two-goal leads I’ll let you know,” Nolan joked.

“It was a good late goal again by Mouls,” Ott said. “We found one last game. To do that again tonight was pretty exciting. It’s something that we wanted to have all year is that character to the end of the games.”

Bruins winger Brad Marchand, who tied it 17:46 into the second period, added: “We’ve got to give them credit. They’ve completely changed from the start of the year. They’re a lot tougher to play against.”

The Sabres played without slick center Tyler Ennis, who has “general body soreness” and is day-to-day, Nolan said. Ennis fell into the boards Tuesday.

Center Zenon Konopka, fresh off surgery on his left pinky, said he would be playing Wednesday morning after a one-game absence. Konopka skated pregame but was then scratched. Nolan said he’s available Friday.

The Sabres dressed John Scott again, but instead of moving up to his normal wing spot, the tough guy played defense a second straight night.

After a sluggish effort Tuesday, Nolan wanted to get his team back in the flow by rolling three lines.