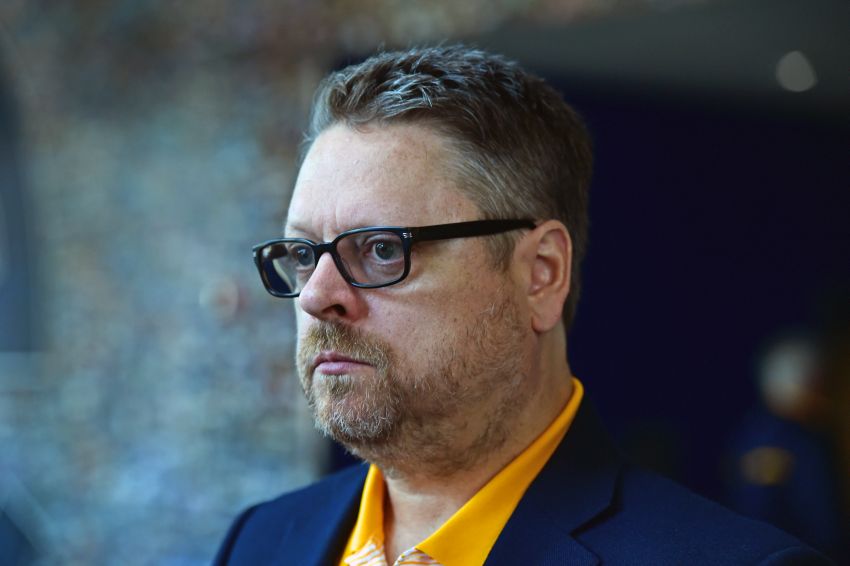 Tim Murray could have a busy summer ahead of him. ©2016, Dan Hickling, Olean Times Herald

BUFFALO – In his two and a half years as general manager, Tim Murray has developed a well-deserved reputation for wheeling and dealing to rebuild the Sabres, a team the previous regime gutted into a laughingstock.

So it’s only natural to assume Murray, who has the Sabres positioned to contend for their first playoff spot since 2011, will be active again at the NHL Draft his team is hosting this weekend, starting with tonight’s first round.

The Sabres improved 27 points last season, jumping from 30th overall to 23rd. They have finally reached a level where Murray and others are only talking about filling a few needs. For years, the Sabres had glaring holes up and down the lineup. One offseason couldn’t fix all their problems.

Now, he’s close to completing the vision he had when he took over in January 2014.

“At some point, you’re going to write that Tim’s pretty happy with his team and we don’t foresee a blockbuster deal,” Murray said Tuesday.

Of course, owning a resume filled with blockbuster deals, including last year’s six-player Ryan O’Reilly trade with Colorado at the draft, the 52-year-old might feel inclined to do something big.

The draft, after all, is on his turf inside the First Niagara Center. The city is buzzing with excitement, and the rabid fan base is almost expecting Murray to make a notable deal.

“I’ve never felt pressure before,” Murray said. “At some point, we got to be happy with our top six (forwards) or our top four (defensemen), right? I’m not saying we’re there yet completely.”

The players the Sabres draft this weekend – they have 11 picks, including the eighth overall selection – likely won’t crack the NHL next season.

If Murray wants to get the slick left-handed defenseman he covets or another scoring winger, he will have to pry him from another team or sign one when free agency opens.

Murray’s activity this summer could put the Sabres over the hump. Still, he won’t call this offseason “critical.”

“I don’t think anything’s critical,” he said. “That means if you don’t get anything that’s in your head done, the (bottom’s) going to drop out of us. I don’t see that happening.”

He added: “Whether that’s through a trade or free agency, we’ll add something. But I don’t see any critical date or critical position. We’ll find a way to get better, for sure.”

Tonight might be a different experience for Murray. Sure, he has been participating in drafts for more than 20 years. But in his first two years as GM, he had two no-brainer selections – forwards Jack Eichel and Sam Reinhart – second overall. Any GM will look smart by drafting those youngsters.

He has never made another first-round pick. The eighth selection could be a difficult decision for his staff. Plenty of prime talent is available.

“I think what teams are going to say is, ‘Holy smokes, this guy’s still available. Let’s make a trade up, I didn’t think he’d be there,’” NHL Central Scouting’s Dave Gregory said.

Gregory added: “Somebody that we have listed at 15 or 16 on our list, if he goes six or seven, it’s not going to be a big surprise”

“I think the first round’s quite deep to 15,” said Greg Royce, the Sabres’ director of amateur scouting. “I think the second round, we’re going to get a real good player, but he’ll be a couple years away. Third and fourth round it gets tricky.”

After Murray traded the 21st and 31st picks on draft day last year, he apologized to his scouts. It’s also unlikely the Sabres will keep all their picks this year.

“Whatever’s best for the team,” Royce said about potentially losing picks. “If we trade the picks to make the team better, that’s just the way it goes.”

This is the fourth straight year the Sabres have owned a top-10 pick. They selected eighth for the first time in team history in 2013, grabbing defenseman Rasmus Ristolainen, who has quickly developed into one of their best players.