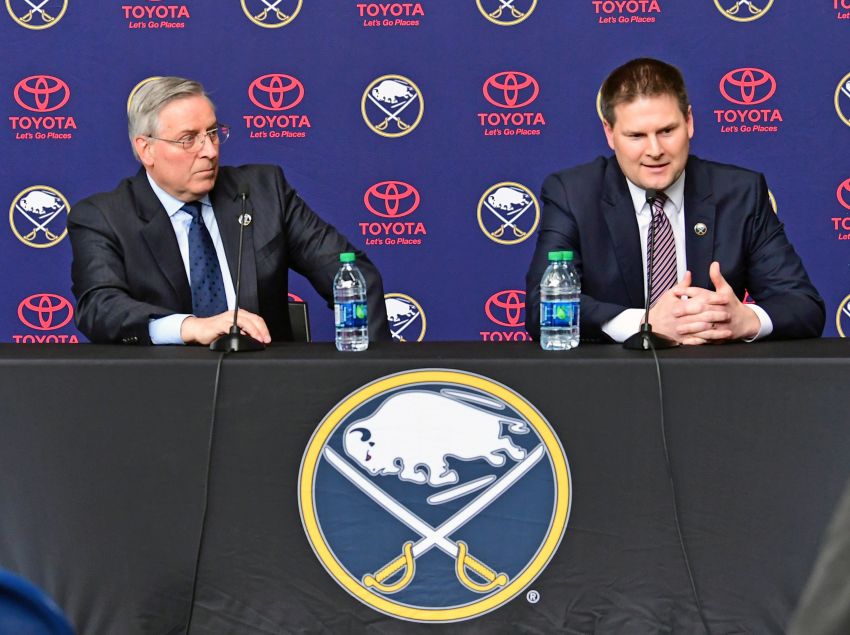 BUFFALO – New general manager Jason Botterill left a darn good gig as the Pittsburgh Penguins’ associate GM to return here and run the Sabres, a reeling team that hasn’t made the playoffs in six years.

On Wednesday, just hours before he was named the eighth GM in Sabres history, Botterill was in Washington watching Pittsburgh beat the Capitals in Game 7 of the Eastern Conference semifinal. The Penguins could be weeks away from earning their third Stanley Cup in nine seasons.

Still, leaving the Penguins, perhaps the NHL’s bellwether franchise, was a no-brainer for Botterill, who also played for the Sabres. Sure, he’ll miss what he built over a successful 10-year run in Pittsburgh.

But Botterill was always working toward his ultimate goal of becoming an NHL GM.

“Why I did all these things was one day to give me the opportunity to be a general manager, and that’s why it’s difficult,” Botterill said Thursday during an introductory news conference inside KeyBank Center. “I have great relationships, friendships in Pittsburgh. I’m cheering for them so I can hopefully get another ring.

In Botterill, the Sabres hired a 40-year-old widely regarded as one of the NHL’s brightest young minds. He’s the league’s second-youngest GM behind the Arizona Coyotes’ John Chayka, who’s 27.

As you might expect, Botterill is much different than his predecessor Tim Murray, who was fired April 20 with coach Dan Bylsma following the Sabres’ last-place finish.

Murray had a scouting background, and even as a GM, he often acted like a scout. Botterill, who retired from playing in 2005, cut his teeth as an executive, rising from the Penguins’ director of hockey operations to their assistant GM and an AHL GM within two years.

“He’s pretty much did everything you need to do in hockey, from being a player, being evolved in evaluating, drafting, developing and molding those players between two teams, the AHL and the NHL, and that takes a lot of discipline and a lot structure,” Sabres owner Terry Pegula said.

Botterill stressed discipline and structure – two things Pegula said the Sabres lacked when he discussed the dismissals last month – throughout the 25 minutes he spoke.

“Structure will be very important to us,” Botterill said. “I believe success comes from structure.”

Clearly, Botterill and the coach he hires must create a new culture around the players, many of whom seemed disconnected with Bylsma as another forgettable season progressed.

“It’s going to be important once you name a head coach for the coach to go out and interact with the players too, especially some of our core players in the leadership group sort of what the expectations are going to be come September,” Botterill said.

Botterill talked over and over about the need to develop players through the Rochester Americans, the AHL affiliate he starred with late in his career. He said having played for both teams, his understanding of their passionate fans made the Buffalo job more desirable.

“From my standpoint, my job is to make sure every player, staff member understands the significance of wearing the Sabres logo and wearing the Rochester Americans logo,” he said.

Botterill must do a lot in a hurry to restore pride in both teams. He has to juggle hiring a coach with preparing for a busy June that includes the expansion draft, regular draft and free agency. He said he wants to have a coach by the NHL Draft in late June.

What’s he looking for in a coach? He wouldn’t “put any limits” on experience.

“I look forward to talking to a lot of people,” Botterill said. “I think there are some great candidates out there. I think the things I look at with so many young players in our organization (means) a developer and an educator is going to be very important. A communicator. In today’s world and today’s game they have to have that strong communication with the players.

“Finally, they need to have that presence in the locker room – making sure the players understand that the head coach is in control and certainly leading the charge.”

Botterill’s greatest expertise – contracts and the salary cap – should immediately help the Sabres, who are just under the cap and must create some flexibility.

“What I like about the group right now is that this is a league that thrives on centermen and the fortunate thing here is we have a couple of amazing high-end centermen,” Botterill said. “I also like the fact that we have some young defensemen that can handle some big minutes up there. The type of team I would like to create here, and it will be in conjunction with the head coach we bring in, is a team that plays a high tempo.”

Botterill said adding a president of hockey operations wasn’t discussed with Pegula and his wife, Kim. He said they did, however, talk about adding more management staff.