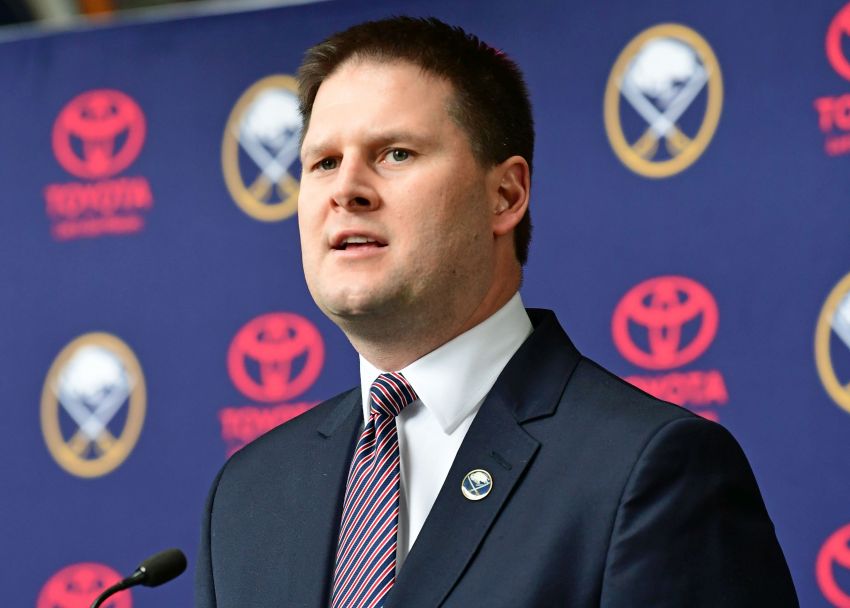 BUFFALO – New general manager Jason Botterill left a darn good gig as the Pittsburgh Penguins’ associate GM to return here and run the Sabres, one of the NHL’s perennial dregs.

On Wednesday, just hours before he was named the eighth GM in Sabres history, Botterill was in Washington watching the Penguins beat the Capitals in Game 7 of the Eastern Conference semifinal.

Still, leaving the Penguins, perhaps the NHL’s bellwether franchise, wasn’t difficult for Botterill, who also played for the Sabres. Sure, he’ll miss his friends and the relationships he built over a successful 10-year run in which the Penguins won two Stanley Cups.

But Botterill, 40, was always working toward his ultimate goal of becoming an NHL GM.

“Why I did all these things was one day to give me the opportunity to be a general manager, and that’s why it’s difficult,” Botterill said this afternoon during an introductory news conference inside KeyBank Center. “I have great relationships, friendships in Pittsburgh. I’m cheering for them so I can hopefully get another ring.

Botterill is regarded as one of the NHL’s brightest young minds. His greatest expertise – contracts and the salary cap – should immediately help the Sabres, who are just under the cap.

But Botterill, who was also GM of Pittsburgh’s successful AHL affiliate, is more than a numbers guy.

“He’s pretty much did everything you need to do in hockey, from being a player, being evolved in evaluating, drafting, developing and molding those players between two teams, the AHL and the NHL, and that takes a lot of discipline and a lot structure,” said Sabres owner Terry Pegula, who fired former GM Tim Murray and coach Dan Bylsma on April 20.

Here’s more from Botterill, who has to juggle hiring a coach with preparing for the expansion draft, regular draft and free agency.

On what he’s looking for in a coach:

“I’m not going to put any limits on what the experience standpoint is at. I look forward to talking to a lot of people. I think there are some great candidates out there. I think the things I look at with so many young players in our organization – a developer and an educator is going to be very important. A communicator. In today’s world and today’s game they have to have that strong communication with the players. Finally, they need to have that presence in the locker room – making sure the players understand that the head coach is in control and certainly leading the charge.”

Botterill said he wants to have a coach by the NHL Draft in late June.

On returning to the Sabres, a team he played his final 36 NHL games with:

“One of main reasons why I accepted this role and wanted to take this job is because I truly understand from my time here as a player in Western New York, both as a player in Rochester and Buffalo, how passionate and loyal the fans in this region are toward hockey.”

On what he likes about the Sabres, who just finished last in the Atlantic Division:

“What I like about the group right now is that this is a league that thrives on centermen and the fortunate thing here is we have a couple of amazing high-end centermen (in Jack Eichel and Ryan O’Reilly). I also like the fact that we have some young defensemen that can handle some big minutes up there. The type of team I would like to create here, and it will be in conjunction with the head coach we bring in, is a team that plays a high tempo.”

Structure will be very important to us. I believe success comes from structure. We want to build to two teams, one in Buffalo and one in Rochester, that are highly competitive, year in, year out.