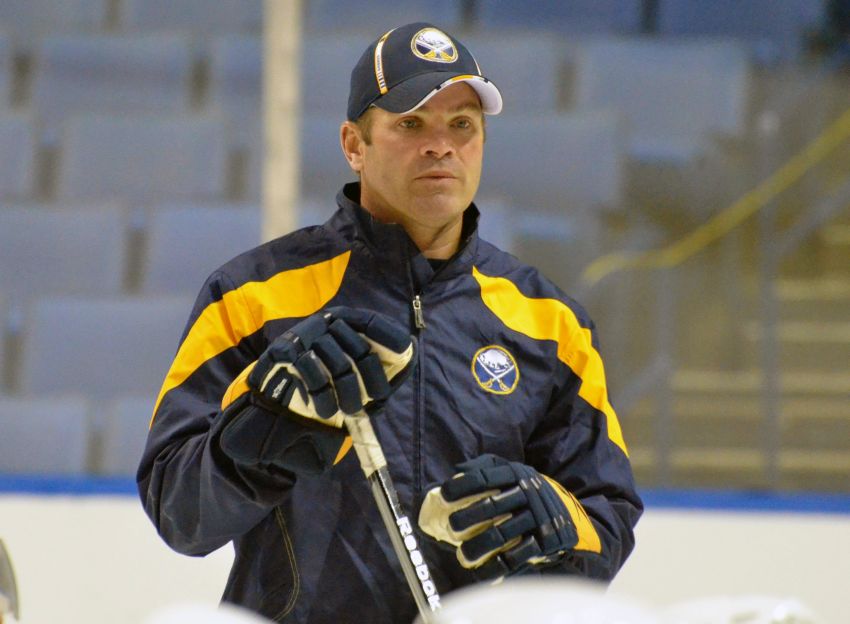 Back then, with Taylor feeding Botterill, the two formed one of the AHL’s most lethal scoring duos. But Taylor adjusted his game when he occasionally earned promotions from the Rochester Americans to the Sabres.

After Taylor retired in 2011, the Sabres hired him as a development coach with the Amerks for one year before promoting him to an assistant for four years.

In his year in Wilkes-Barres, regularly one of the AHL’s top clubs, Taylor learned how Botterill operated and the relationship between the two teams.

There was more than one Buffalo executive familiar with the 45-year-old Taylor. Botterill said Randy Sexton, the new assistant GM/Rochester GM he hired from the Penguins last week, did most of the coach interviews.

“I felt there was a good fit there with Chris,” Botterill said. “I think it’s going to be a scenario where he comes in, he’s extremely well organized. He’s very familiar with Rochester and will have that presence to be able to interact with the players.”

“We’re looking for guys in their mid-20s that can really help us as an organization,” Botterill said.

Botterill knows firsthand the value of an entire organization. The Penguins have won two consecutive Stanley Cups, in part, because of their depth and development in the AHL. Prospects the Penguins groomed in the minors and more experienced players signed as free agents (think former Amerks and Sabres defenseman Chad Ruhwedel) provided big contributions to their runs.

The Sabres’ depth was whittled away under Murray, and the Amerks, of course, suffered. They haven’t made the playoffs since 2014.

“We wanted to add depth to our organization to strengthen Rochester, also a situation where if there are injuries up in Buffalo, that we would have players that could come in and contribute at the National Hockey League level,” Botterill said.

Taylor already has several of those players in his arsenal.

Botterill brought back former Amerks captain Kevin Porter on a two-year deal. The forward spent the last two seasons with Botterill in Pittsburgh and Wilkes-Barre, playing 43 NHL games. The veteran also played 43 contests with the Sabres earlier in his career.

“A strong leader in Wilkes-Barre the last couple of years,” Botterill said. “But (he’s) also as a player, especially two years ago, that (coach) Mike Sullivan really trusted at the National Hockey League level, a player that can play both center and wing, play a smart two-way game.”

In forward Seth Griffith, who has 34 goals and 121 points in his last 95 AHL games, the Sabres possess one of the AHL’s top scorers.

“We think has (he) an extremely high offensive upside, has been able to score extremely well at the junior level and at the minor league level,” Botterill said. “We think in the right situation he can provide scoring at the National Hockey League level in the future.”

Griffith has six goals and 16 points in 58 NHL games.

The Sabres also signed signed defenseman Matt Tennyson, who has split the last three seasons between the NHL and AHL and has 105 games of big league experience. Tennyson, who inked a two-year deal, could be the Sabres’ seventh or eighth defenseman.

“We view him as one of the guys that can step in right off the bat in training camp here and fight for a position,” Botterill said.

Botterill said forward Kyle Criscuolo, who just won a Calder Cup with the Grand Rapids Griffins, is “a young player who plays with a lot patience and high compete.”

“A competitor in the net, has really good quickness,” Botterill said of Wilcox. “We think he’s just going to be able to strengthen our entire organization from top to bottom from a goaltending aspect.”