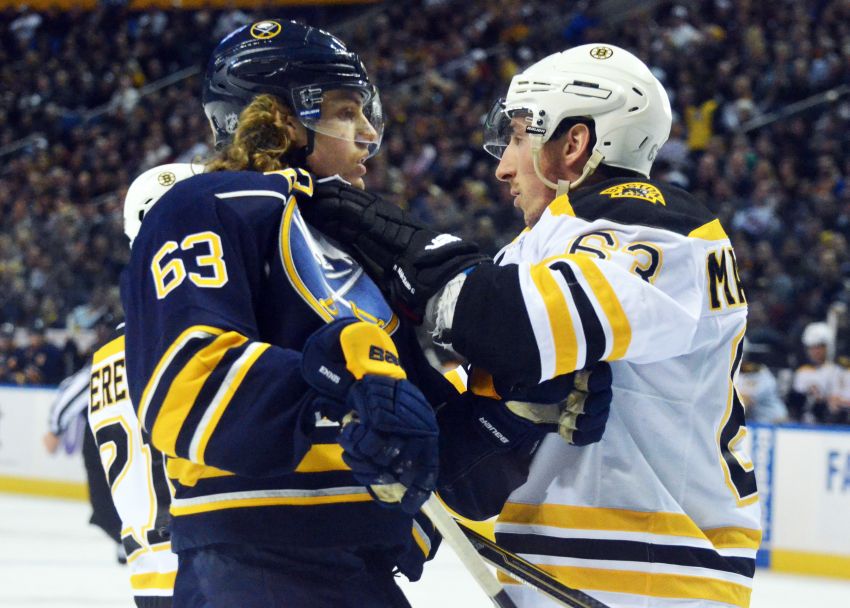 BUFFALO – A night after his dynamic effort stole a victory for his teammates in New York, the Sabres demanded an encore performance from goalie Ryan Miller.

Thirteen games into the season, the Sabres are a gigantic mess defensively, allowing 40 shots some nights and loads of scoring chances.

Miller can only do so much, but he dazzled again Sunday in the Sabres’ 3-1 loss to the scorching Boston Bruins, stopping 36 shots before 18,869 fans inside the First Niagara Center. He looked like a one-man team at times, single-handedly keeping the Sabres in the contest.

After 16 first-period saves and some huge stops early in the second, it appeared Miller might be having his greatest night ever.

But the Sabres’ many mistakes eventually burned them. Miller couldn’t cover them all up.

“We got to shape our zone, clean up our play,” Sabres winger Patrick Kaleta said. “Millsie’s playing phenomenal back there and we got to help him out.”

The short two-game winning streak is history. The flaws Miller covered up while making 41 saves in Saturday’s 3-2 win over the Islanders haven’t been solved.

Now it’s back to reality. The Sabres are 5-7-1 and going nowhere fast.

The Sabres have allowed an NHL-high 46 goals this season and let opponents pump about 35 shots on them a night.

“We’re giving up too much,” Pominville said. “We’re making it too easy on them. I feel like we have to earn every opportunity we get. We have to work for our opportunities. On the other hand, sometimes we give them the easy ones.”

Miller believes he doesn’t have to be flawless to win.

“There’s stretches like that in the season,” Miller said. “I don’t want us to feel like we don’t need to improve anything. Our game, it’s getting better. Shots on goal, it’s not always a translation. I can stand in there and play some hockey, too.

“We just got to translate into getting the puck back and getting some opportunities.”

The Sabres’ lack of secondary scoring isn’t helping them, either. With the top trio of Pominville, Cody Hodgson and Thomas Vanek gassed and generating nothing, the Sabres got little from anyone else.

“The top half of our lineup didn’t have it,” Sabres coach Lindy Ruff said.

Tyler Ennis, the only other forward enjoying a strong season, scored the Sabres’ lone goal, his fifth and 10th point, 18:01 into the second period, converting a nifty feed from Drew Stafford in front.

But the Sabres couldn’t beat Bruins backup goalie Anton Khudobin, who made 25 saves in his seventh NHL start.

Incredibly, the 8-1-1 Bruins have allowed only four third-period goals this season, all of them in the Sabres’ 7-4 win in Boston on Jan. 31.

“I don’t like losing, especially to that team, especially just in general there’s a feeling that burns in my stomach and I hate it,” said Kaleta, who landed several huge blows during an early scrap with Gregory Campbell.

The burning might stop when they play tighter defensively. A deep blue line was supposed to be the team’s greatest strength.

“We’re spending too much time in our own zone,” Sabres defenseman Robyn Regehr said. “Defensively, we have to tighten things up there. We can’t keep allowing 35-plus shots a game here. There’s too many chances against.

Ruff acknowledged some giveaways left him shaking his head. Miller covered up one gigantic gaffe late – a blind Andrej Sekera pass up the middle that Bergeron intercepted – with an incredible pad save from the ice remisicent of Dominik Hasek.

“We made some tough decisions,” the coach said. “I thought Andrej could’ve moved the puck a little bit quicker. … You got to take better care of the puck.”

Brad Marchand finally solved Miller on Boston’s 23rd shot, beating him from the top of the left circle 7:01 into the second period.

Bergeron scored the winner from the left circle after the puck bounced to him from the end boards.

“They got a great bounce in their favor and a great shot after that,” Regehr said.

Related: Sabres’ Ellis has been asset for years

Sabres’ Myers still out as Regehr returns; Ellis on waivers