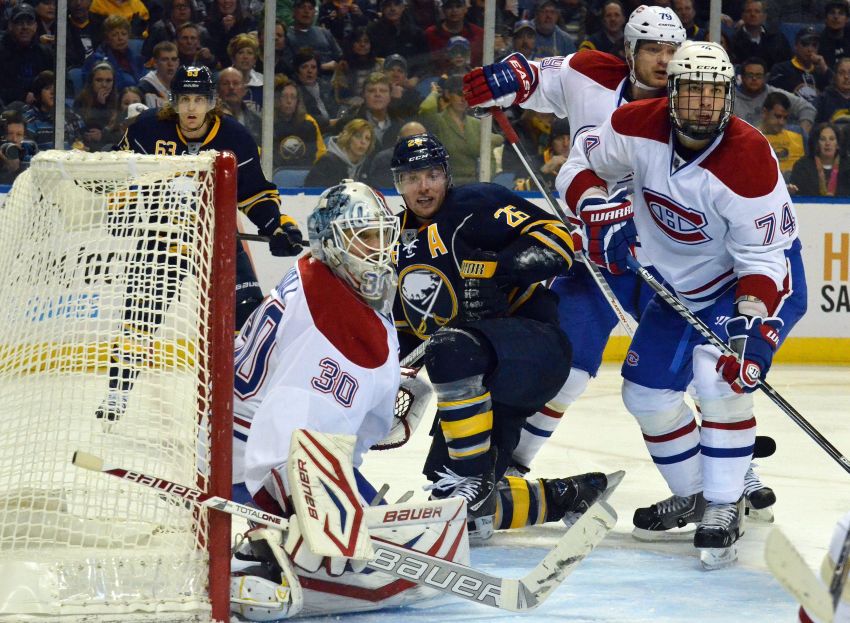 BUFFALO – Follow Sabres superstar Thomas Vanek’s dynamic run closely. Enjoy watching the nifty goals, the points and knowing each time he steps on the ice something special could happen.

This might be a once-in-a-lifetime experience. NHL players just don’t score at Vanek’s torrid pace anymore.

The slick Austrian already has 10 goals and 21 points through 10 appearances, a stat line from eras past. He’s on track for 47 goals and 99 points in only 47 games. That’s 172 points over a full 82-game season.

So far, Vanek, who was held pointless for the first time this season in Tuesday’s 4-3 loss in Ottawa, hasn’t shown any signs of letting up. Ruff’s finally giving Vanek more ice time, skating him more than 20 minutes the last two games, including 23:56 on Thursday.

But Ruff knows Vanek and linemates Pominville (six goals and 14 points) and Cody Hodgson (five goals and 10 points) will eventually cool off.

That’s why the Sabres’ secondary scoring must improve quickly. Their production’s too top heavy entering tonight’s tilt against the Islanders in New York.

The top line has scored 62 percent of the Sabres’ 34 goals. Vanek alone has 29 percent.

Slowly, the secondary production has been increasing a bit recently.

With a goal and three points Thursday, center Tyler Ennis is up to four goals and nine points. Steve Ott, who scored his first goal since opening day on Thursday, is the only other forward with two goals.

Most notably, Stafford, a 31-goal scorer in only 62 games two years ago, has zero this season.

What’s happened to Stafford, who scored 20 times last season? Ruff believes he’s not getting to the crease enough.

“You got to get in that prime area, that little square area in front of the net,” Ruff said earlier this week. “You can’t go by the net. You got to stop around the net. There was a few situations where the puck’s gone to the net and he’s watching and going wide where we got to get inside.”

Stafford has been focusing on getting to “those dirty areas” around the net.

“I’ve been through it before. Everyone’s been through it,” he said. “It’s something when you get that puck on your stick, you got to be thinking shoot more, keep it simple and try and get in front of the net a lot more.”

“I feel as though I’m doing the best to get the opportunities,” Stafford said. “I’m working. I’m doing what I can to get there. It’s just not going. On top of that, we’re losing games. It makes it even more of a challenge, even more frustrating. But now’s the time when you need to focus on the things you can control like effort, your work habits.”

The veteran “could be ready soon,” Ruff said.

The Sabres returned Adam Pardy to Rochester on Friday. The defenseman played one game.

The Sabres practiced in Long Island on Friday after leaving Buffalo early to beat the blizzard battering the northeast.

Vanek’s the sixth player in team history to reach the 20-point mark in 10 or fewer games played.