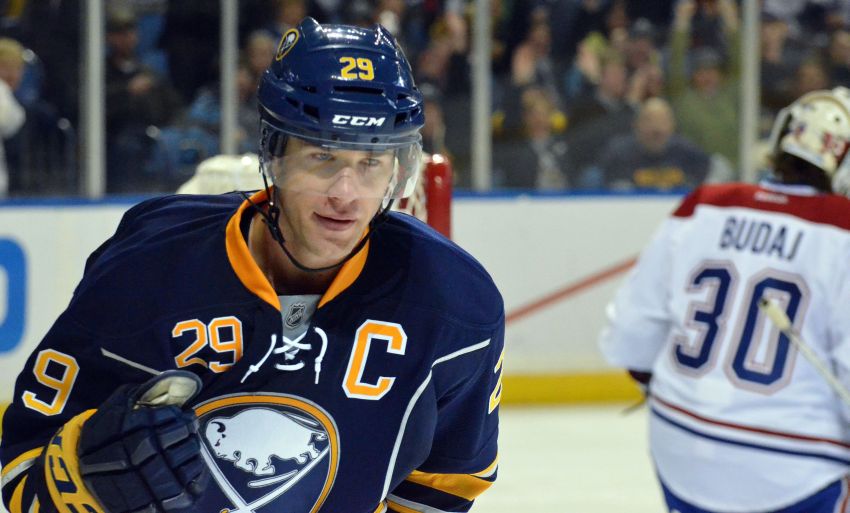 BUFFALO – As the final seconds ticked away Thursday toward the Sabres’ fourth straight loss, thousands of disgusted fans left the First Niagara Center. The remnants of the crowd of 18,866 booed their struggling team mercilessly.

During one of the final whistles, The Who’s “Won’t Get Fooled Again” blared loudly from the speakers, including the never-more-appropriate verse, “Meet the new boss, same as the old boss.”

Were the Sabres trying to create a good atmosphere or reminding their faithful that coach Lindy Ruff and general manager Darcy Regier are still in charge?

Still, the Sabres only trailed the Montreal Canadiens 4-3. With superstar Thomas Vanek on the ice, they had a good chance to avoid their eighth loss in nine tries or at least earn a point.

“We knew we had to keep grinding away at it,” Ruff said after Vanek’s wild goal from his knees in the crease with 1.9 seconds left in regulation helped the Sabres stun the Canadiens 5-4 in a shootout.

The Sabres battled until the bitter end. Vanek scored in the shootout before captain Jason Pominville clinched it in the third round.

“We were finding ways to lose and we found a way to win,” Ruff said about the Sabres’ fourth win. “That’s a big positive.”

But Vanek’s late goal, his second of the night and his 10th in only 10 games, is the one being replayed endlessly today.

Right now, no hockey player in the world is performing better than Vanek.

Ruff joked he wrote Vanek’s No. 26 three times for the shootout.

“I had to scribble out a couple,” he cracked.

After Vanek’s power-play score made it 4-3 7:57 into the third period, the Austrian tied it amongst the chaos in the crease. Somehow, Vanek poked the puck as a sea of bodies battled for position all around him.

“Just the effort to tie the game on his knees, he took a lot of abuse tonight,” Ruff said. “He … did an unbelievable job scoring that goal.”

As Vanek quickly surveyed the crazy crease action in front of Montreal goalie Peter Budaj, he decided to stay outside the fray a bit.

“Sometimes when you go in too quick the puck seems to go in right where you left it,” Vanek said.

Marcus Foligno, who wasn’t even credited with an assist, created the goal by grabbing Pominville’s pass, zooming through the right crease and dishing the puck in front as he skated past the net.

“The goalie didn’t make a good enough effort to put a glove on it and the puck’s loose,” Foligno said. “You got to keep playing until the whistle.”

As the crowd left the FNC, Pominville told his teammates to go back onto the ice – some players had already taken off their jerseys and equipment – and salute the fans.

“It’s a tough stretch that we went through,” Foligno said. “We’re still not out of it. We have to turn it around. Some of the fans stuck around and saw us tie it up, and then we were able to win it for them.”

Now, the Sabres must carry this effort into Saturday’s tilt in New York against the Islanders. The Sabres shellacked the Bruins 7-4 last Thursday in Boston in what many believed was a statement victory.

Less than two days later, the Habs throttled them 6-1 in Montreal.

“As much as we’ve tried to stay positive and stay away from the mistakes and try to ride through this tough stretch, it really is about winning the next game already … because we got some ground to make up,” Ruff said.

Thursday’s triumph could go a long way. The Sabres responded to Montreal throughout their 11th game.

Tomas Plekanec opened the scoring 4:11 into the game. But Steve Ott tied it 15 seconds later, getting his first goal since opening day.

Tyler Ennis tied it at 2 13:06 into the second period less than a minute after Brendan Gallagher had put Montreal up again.

But P.K. Subban’s wicked power-play one-timer past Sabres goalie Ryan Miller late in the second period and Plekanec’s breakaway tally 45 seconds into the third period appeared to ice the game.

Ott, the sandpaper presence the Sabres acquired over the summer, gave the Sabres life, though, drawing Ryan White into two roughing penalties.

Vanek scored shortly after, setting up the memorable finish.

“I know the fans are frustrated as are we,” Vanek said. “I think we showed them there’s no quit, even though we are struggling at times.”