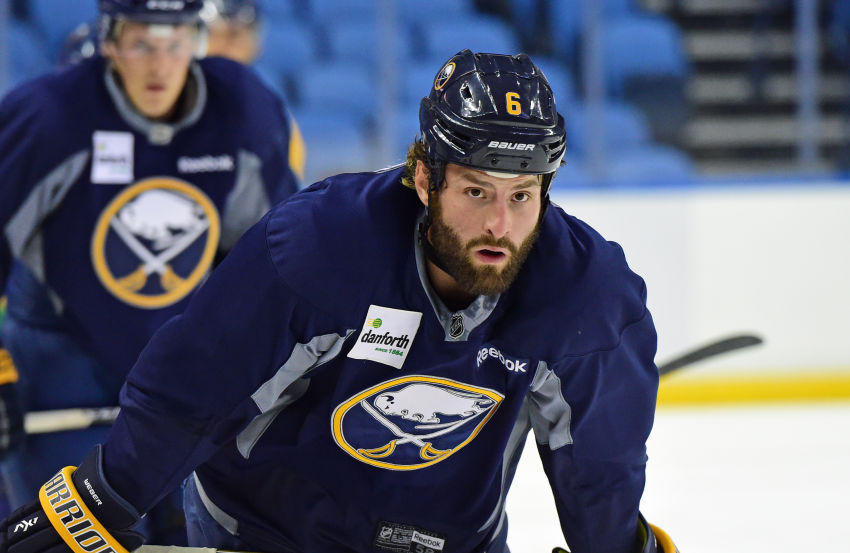 BUFFALO – For nine minutes, defenseman Mike Weber couldn’t stop smiling. All of the frustration, all of the pain of experiencing consecutive 30th-place finishes has vanished thanks to a dramatic offseason overhaul, and the gritty veteran wanted to talk about the new-look Sabres.

“All smiles, wow, what a difference an offseason will make,” Weber said Friday. “Management told us leaving here (last season) they’d make the proper changes to get us in and be more competitive. They’ve held up their end, so now it’s fun for us players to get on the ice and take care of our business now.”

For the first time, mega-prospect Jack Eichel, the second overall pick in June, skated with Sabres veterans, including Ryan O’Reilly, the No. 1 center brought in from Colorado. In all, eight or nine new players could be in the opening-night lineup, including Evander Kane, a former 30-goal scorer.

“It’s so exciting to finally have a feeling that we’re going into a season we’re competing for a playoff spot and we’re going to make some noise here,” Weber said.

Bylsma added: “It’s not the Buffalo Sabres from last year.”

Six months ago, the Sabres couldn’t avoid talk about tanking to secure to first or second draft pick. These days, some observers wonder if they can push for a playoff spot.

That’s special feeling for Weber, who spoke passionately about Buffalo being his home and a place he wants to stay. The Sabres’ recent woes often made the Pittsburgh native emotional.

“It’s a huge weight lifted off your shoulders,” the longest-tenured Sabre said about the team improving. “I mean, you guys have seen the frustration, the pain, the misery that has been our last two seasons. To finally walk through these doors and a different atmosphere, a different mindset, I can’t stop smiling today.”

Weber, 27, smiled after catching his breath. Bylsma’s workouts were noticeably up-tempo. He wants to set a new standard early.

He added: “Some of us aren’t used to moving that way, to playing fast, the way we should be playing the game here in the National Hockey League. It’s just truly exciting to be … finally be trending upwards to where we should be.”

“It was a great skate, a lot of really good drills where you’re working hard but you’re learning too at the same time,” he said. “I assume that’s how high-level, how intense the practices are going to be throughout the year. There’s a lot of structure within the effort of those practices.”

Optimism, of course, can only take the Sabres so far, Ennis said.

“There’s been a lot of teams in the past that have built their roster up and they’ve struggled because maybe people think you get good players in the place it’s just going to happen,” he said. “There’s a lot of stuff within the game that we need to improve on.”

O’Reilly has already improved one of those areas, communication. For years, the Sabres have been too timid. Right away Friday, O’Reilly’s loud chatter helped Weber.

“It’s been a while since I’ve had a centerman that talked to me that much,” Weber said.

Instead eating the puck or doing something out of character, O’Reilly’s booming voice allowed Weber to make smart plays.

“To hear him talk to you every time you’re going back in the zone, that’s an underrated skill,” Weber said. “That’s a guy who’s come in here in a leadership role and has taken advantage of it.”