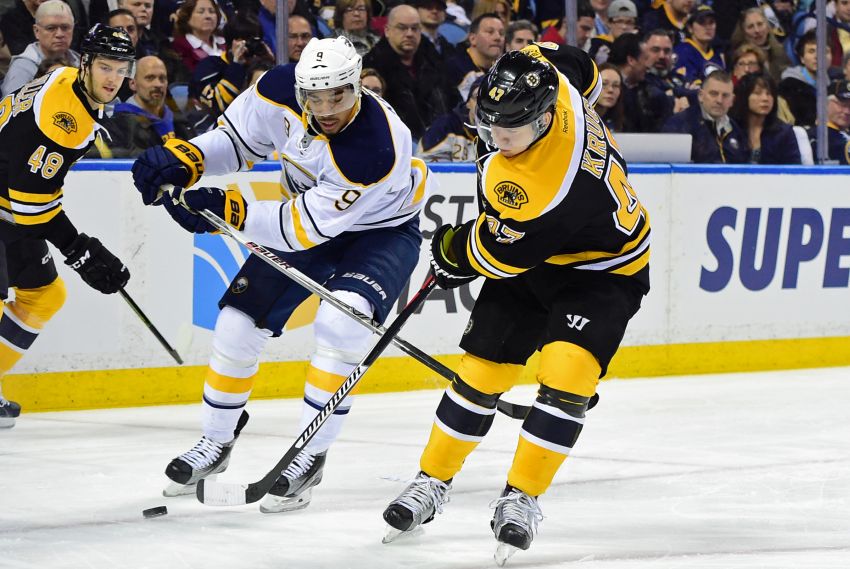 BUFFALO – As expected, Sabres winger Evander Kane, who earned a one-game benching for oversleeping and missing practice after partying in Toronto, will return for Friday’s road game against the Columbus Blue Jackets.

“I’m going to make sure that this doesn’t happen again (and) I’m not in the same situation because it’s not a trend I want to be a part of,” Kane said this afternoon following practice. “For me, it’s definitely a lesson. I want to make sure it’s a lesson learned.”

After scoring a goal in the Sabres’ 4-1 home win against Colorado on Sunday afternoon, Kane flew to Toronto for the NBA All-Star Game. He posted video of the game and the surroundings on Snapchat and also of himself and some friends drinking and partying in what appeared to be nightclub.

Hours later, he phoned the Sabres and told them he wouldn’t be attending practice Monday. Before sitting out Tuesday’s 2-1 shootout loss in Ottawa, Kane apologized to the organization and his teammates.

His teammates, Kane said, have been understanding.

“We have a really good group of guys in here, and, as I said, it was tough to let those guys down the other day,” he said. “I’m going to make sure I’m the best player possible for these guys.”

“But it’s one he has to also start to show, to continue to show that he has learned that lesson,” he said.

In other news, center Ryan O’Reilly (ill) and winger Zemgus Girgensons (maintenance) missed today’s session inside the First Niagara Center. Both are expected to play Friday.

With Kane back, the Sabres plan to send down rookie winger Justin Bailey today, Bylsma said.

Update: The Sabres have officially sent Bailey back to the Rochester Americans.

Update: The Sabres sent Catenacci back to the Amerks on Friday morning.

The rookie wanted to downplay the hit, which Gudas wasn’t reprimanded for.

“I think I’m over it,” Catenacci said. “I think the team’s over it. The biggest thing is me coming back playing and being 100 percent. Today I felt really good.”

Catenacci wouldn’t comment on the hit, which likely left him concussed.

“I know I’m a young player, but at the same time, I know to keep my head up in the neutral zone,” he said.

Bailey’s first four NHL games impressed Bylsma, who cited his size, speed and skating ability. The Williamsville native had seven shots in his debut a week ago.

“The Philadelphia game will be used as what he can do, what he can do speed-wise, physicality, offensive zone, around the net,” Bylsma said. “I think he showed his best in that game.”