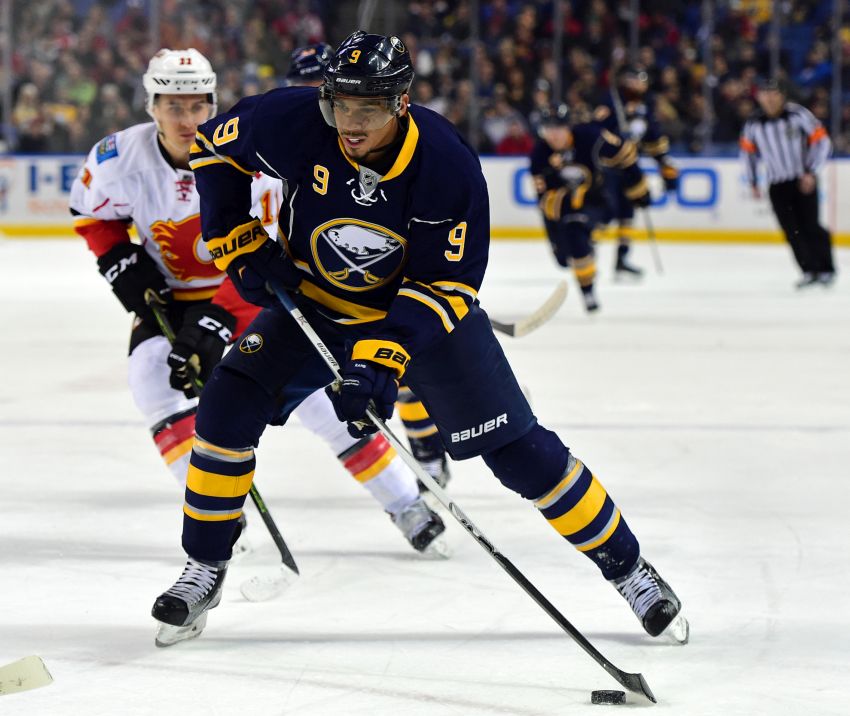 TORONTO – By now, 56 games into Evander Kane’s Buffalo Sabres tenure, most observers know what will happen when the former 30-goal scorer zooms down the wing.

Instead of cutting to the net and skating to the so-called “dirty area,” Kane often just shoots the puck.

Modern NHL goalies – so large, well-trained and armored – usually swallow it up easily.

Kane began Monday’s 4-3 shootout win over the Maple Leafs with the ninth-most shots in the NHL, a team-high 228 (4.1 a game). The next-closest teammate, center Jack Eichel, had 197 shots in 66 appearances.

“If you don’t shoot, you can’t score,” he said. “It’s kind of the mentality I have behind it. If they don’t go in, they can create havoc, opportunities for other guys. Usually, 90 percent of time, shooting the puck’s the right play.”

But is it? While Kane’s 18 goals rank second with rookie Sam Reinhart behind Eichel’s 19, the Sabres didn’t give up a bundle to the Winnipeg Jets last year to have him score 20 or 25 times.

They expect the seven-year veteran, who scored 30 goals in 2011-12, to hit and surpass the prestigious mark again.

“We’ve talked to Evander about where he gets his goals from, where he can get his goals from,” Sabres coach Dan Bylsma said. “I think if Evander’s going to move into the 30-goal range, 30-35, he’s going to have to get on the inside.”

Bylsma said Kane, who has a 7.9 shooting percentage, needs to score about seven goals from the inside.

So does Kane shoot too much from the wing?

“No, I think you got to find different ways to get your shot off,” he said. “Obviously, scoring positions, they’re hard to get in this league. That’s why you don’t see a lot of guys really getting to 30 goals nowadays. It’s hard to score. You got to shoot when you have time and space. I’ve scored from all areas of the ice.”

“I was kind of in awe,” said Catenacci, a native of nearby Newmarket.

“It’s pretty cool for me and my dad to both play against a legend,” Catenacci said. “I think that was a pretty special moment.”

Seven games into his NHL career, Catenacci said his nerves have disappeared. Having been awarded a spot on the fourth line last week, the 22-year-old winger, who was born in Jagr’s third NHL season, knows he has a special opportunity.

Of course, Catenacci had a good excuse if he felt a few more jitters Monday. Having grown up about 35 miles away, around 20 or 30 family members and friends watched him up close inside the Air Canada Centre. Catenacci also played a preseason game here Sept. 25.

“A lot of excitement,” he said. “Obviously, it helped playing preseason here in front of my family and friends. I think coming to the rink was a little familiar.”

The 5-foot-9, 191-pound Catenacci could stick around for the final month if he impresses the Sabres.

“I think he’s got to play with some speed, some grit, some bite to his game,” Bylsma said. “He’s got to be an effective agitator with those assets, with the speed, grit ability. He has some skill in his game. He’s shown at the American League level (he can) get points, have skill.

Monday was only the Sabres’ second meeting this season against the rebuilding Leafs and the first since Oct. 21. The fierce rivals now play three times over a 25-day stretch.

Since Eichel hadn’t played in Toronto yet, almost 20 reporters were waiting for the 19-year-old rookie following the morning skate.

The New York Rangers, who play the Sabres in Buffalo tonight, will be without No. 1 goalie Henrik Lundqvist (neck), winger Rick Nash (bone bruise) and defenseman Marc Staal (back).