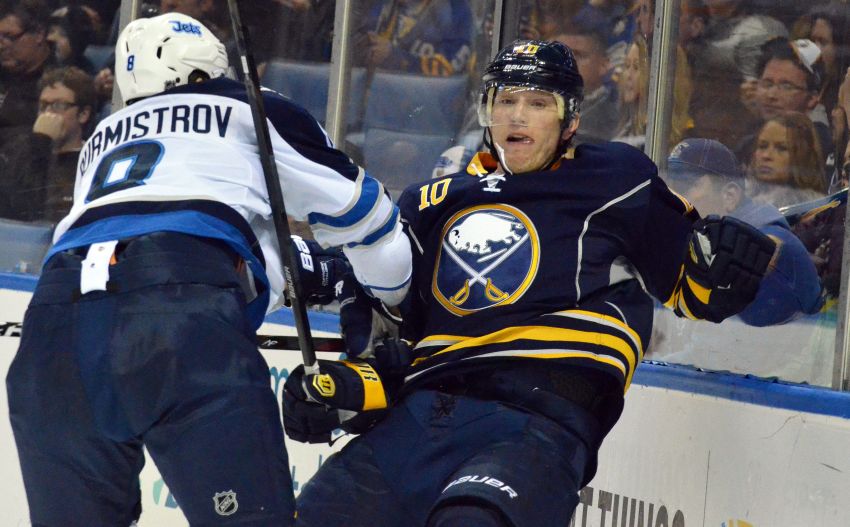 The country recently failed to qualify for the 2014 Sochi Olympics. Consider that other than three world war bans, the country’s ice hockey team had qualified for every other Olympics, all of them since 1948.

“Obviously, the non-qualification for the Olympics is very frightening, very sad,” Ehrhoff said Monday prior to the Sabres’ 2-1 loss to the Winnipeg Jets inside the First Niagara Center.

Still, Ehrhoff accepted an invitation Sunday to represent Germany at the next month’s world championship, his ninth international appearance.

“It’s just not right to criticize the federation or German hockey and then not show up to try to help change things,” Ehrhoff said. “I felt like I needed to do it. I wanted to do it, too. I feel like it can give me a positive end to the season.”

With the Sabres out of the playoffs, expect other players to be invited to the tournament, which starts May 3 in Finland and Sweden.

While Germany has hardly been a hockey superpower over the years, the sport’s still popular in the country. Seven Germans are in the NHL, including current Sabres Jochen Hecht and Alexander Sulzer.

What has happened to the national team?

“It’s structural things that go on behind the scenes,” Ehrhoff said. “There’s a lot of unsolved stuff where people just can’t find solutions. It’s not as organized as it should be. That’s why we are in the situation we are. With the possibilities we have as a nation, we should do better.”

For years, Stafford, a 6-foot-2 power forward, has played down low during man advantages. But interim Sabres coach Ron Rolston recently put Stafford on the point, a position he played in college and some of his brief run Rochester six years ago.

“You have a lot more responsibility of making solid plays, especially against teams that are pressuring really hard,” Stafford said. “You have to have a certain amount of patience up there and also just have a little bit of moxy with the puck. It’s a little more challenging.”

Stafford, who has only six goals, 16 points and a team-worst minus-17 rating in 44 games, doesn’t mind the move.

“At this point, honestly, whatever they want to do, wherever they want me to play, I’ll do my best,” he said. “If that’s where they see me fitting in, I’m going to embrace it. I really enjoy it so far.”

Stafford created Thomas Vanek’s second-period goal when he pinched into the left circle and fed Tyler Ennis on the opposite side before Ennis hit Vanek in the slot.

“I do like creeping down into that shooting area,” Stafford said.