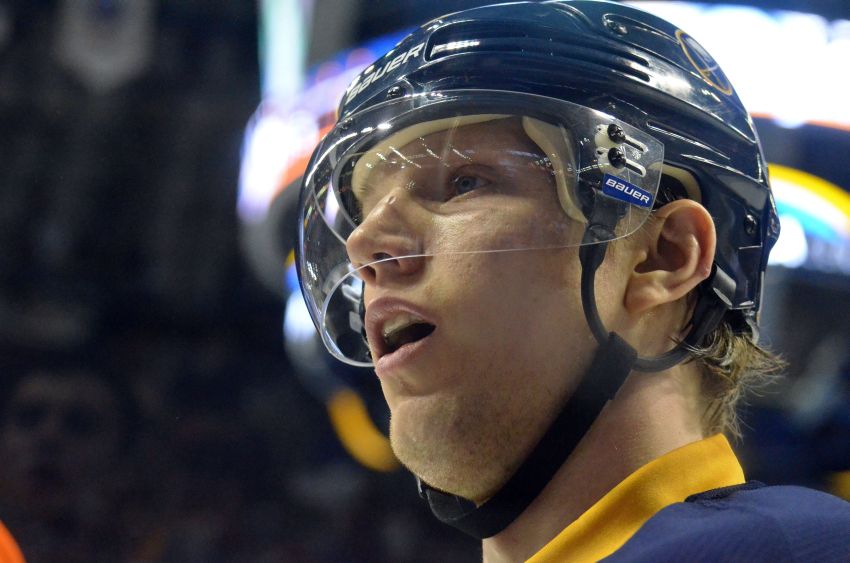 The bad-boy actor has never hidden his affection for America’s pastime. He once bought all the outfield seats in Anaheim to try to grab a home run ball from an Angels game.

But what does he know about hockey? And what the heck was he doing tweeting about the Sabres on Sunday afternoon during their 4-3 loss to Pittsburgh?

Following Paul Martin’s winning goal, Sheen wrote, “Watching the best goalie in the world Ryan Miller, stand on his head, then some (lousy) teammate got in his way. #sux.” For good measure, Sheen tweeted a photo of his television with Miller on the screen.

That teammate, Christian Ehrhoff, happens to be the Sabres’ best defenseman entering their tilt against the Winnipeg Jets tonight inside the First Niagara Center.

Hey, if Ehrhoff, who just joined Twitter, ever wants to diss Sheen, he’s got plenty of ammunition, right?

The next time Miller sees Sheen, maybe he should explain how well Ehrhoff has been performing this season. Screening Miller late Sunday shouldn’t mar a strong, workhorse campaign from the slick-skating German, who’s in the second season of a 10-year, $40 million contract.

Ehrhoff’s skating a team-high 24:33 a game, the NHL’s 24th-highest ice time. He played 26:58 in Friday’s 4-2 win over Boston, scoring the winning goal from the slot before assisting on the insurance goal. He had two assists Sunday while skating 24:18.

“Yeah, I like … to play a lot,” Ehrhoff said. “It keeps you in the game when you go out there and you just get a good rhythm.”

That rhythm has been vital to the Sabres. Right now, with almost every other defender struggling, the 30-year-old is arguably the lone bright spot on Buffalo’s blue line.

This is nothing new, though.

On the surface, Ehrhoff underwhelmed last season, when $10 million got the Sabres five goals, 32 points and a minus-2 rating in 66 games. Ehrhoff had averaged 14 goals, 47 points and a gaudy plus-29 rating the previous two seasons in Vancouver.

But Ehrhoff, a supreme puck-rusher who possess a lethal shot, still made his presence felt. The Sabres went 36-22-8 with him the lineup and 3-10-3 when he was injured.

“I thought I had an impact here,” Ehrhoff said last month.

Losing power-play points has hurt Ehrhoff, who had 12 goals and 51 points on the man advantage during his two seasons with the Canucks. Of course, playing with the talented Sedin twins, Daniel and Henrik, certainly helped.

Ehrhoff only has one power-play goal and 14 points since coming to Buffalo, including three assists this season with the Sabres’ awful, 27th-ranked power play.

But through 15 appearances this season, Ehrhoff has two goals, 10 points a plus-6 rating, a six-goal, 32-point pace. He’s looking like the elite, difference-making defenseman many had envisioned he would be when the Sabres jumped the gun and traded for his rights prior to the start of free agency in 2011.

“My game hasn’t changed over the offseason,” said Ehrhoff, who played 32 games for the Krefeld Penguins in Germany during the NHL lockout. “For me, it’s not much different. Obviously, having the first year over, I know the guys now. That’s the only difference.”

Ehrhoff hasn’t played less than 20:40 in a game this season. He also appears to be using his shot, something teams usually key on, more effectively.

On Sunday, Ehrhoff’s laser from the point created a juicy rebound in front for Cody Hodgson’s score. Thomas Vanek tipped his quick wrist shot on the power play in later on.

Ehrhoff also blocked a Deryk Engelland shot with his chest.

“The cameras can’t see the contusion on his body, but the blocked shot he had sacrificing himself probably speaks for itself,” Sabres winger Steve Ott said. “The rest of his game was phenomenal, getting shots through, creating chances. Those are the big things that we need from him and he’s very solid.”

Still, as Sheen pointed out, it wasn’t a perfect game.

“I’m in front screening Millsie,” Ehrhoff said about Martin’s one-time blast from the point. “Yeah, he doesn’t have a chance on that. It’s just frustrating.”