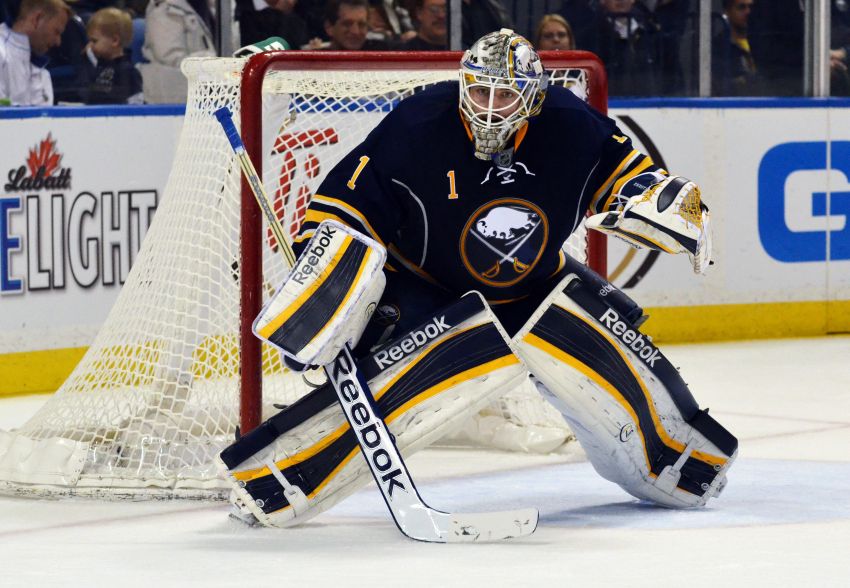 “I came off the bench the other game,” Enroth said Monday after making 37 saves in the Sabres’ 2-1 loss to the Winnipeg Jets. “So I really didn’t care about that after the game. Just trying to look at the games I’m starting, and recently all the games I’ve been starting I’ve been playing pretty well.”

Enroth’s slick numbers back up his claim. The 24-year-old is scorching, playing like a future No.1 netminder again.

Remember, Enroth’s March 12 victory was his first since Nov. 26, 2011. Following two poor early-season starts, he was possibly playing for his job not long ago.

“Jhonas was great,” Sabres winger Steve Ott said. “He was our best player by far tonight. He came in. We knew he would be strong.”

Enroth was strong from the get-go, making a nifty glove stop on Alexander Burmistrov just minutes into the contest, one of 15 first-period stops.

“I watched the video before the game,” Enroth said, “so I knew he was going to go high glove there.”

Still, Enroth’s sturdy effort couldn’t buoy the Sabres in their first outing since Friday’s loss knocked them out of the postseason chase.

“I had a couple guys in front of me there,” Enroth said. “So I never really saw it until it hit my chest or whatever it hit.”

Enroth got a piece of the puck, but it trickled in, possibly under his arm.

The ninth-place Jets, who play the Capitals tonight in Washington for the Southeast Division lead, needed the win badly. The Jets trail third-place Washington and Ottawa and the Rangers, who hold the last two Eastern Conference playoff spots, by one point. Those three teams, however, each have a game in hand.

“I don’t think it’s a secret that we probably have to win the last three games to get in the postseason, so I think tonight was the first step,” Jets captain Andrew Ladd said. “We didn’t want to get ahead of ourselves. But now we’ve taken that step and we can focus on Washington … and the biggest game of the year for us.”

Ott thought the Jets possessed “that mentality of wanting to be a playoff team.”

“For us, it’s dwelling on us that we’re not a playoff team in here, and that probably was the difference mentality-wise,” Ott said. “Pride-wise, you still have to go out there and battle.”

Ott fought Ladd late in the second period after he hit Christian Ehrhoff, one of the few times the announced crowd of 18,654 fans inside the First Niagara Center roared.

The Jets’ Aaron Gagnon opened the scoring 7:42 into the second period, deflecting a shot high.

Incredibly, the Sabres have lost six straight games to the Jets while scoring one goal in each.

In his first game since March 12, the Russian skated 15:18 and had a couple of nice scoring chances centering Jochen Hecht and Drew Stafford.

“I was a little bit disappointed I didn’t score,” said Grigorenko, who spent a month back in junior. “I had a couple chances. I was around maybe like five times today. But (I) couldn’t.”

“I’d have to watch the film to really give it justice,” Rolston said.

Rolston gives more one-liners than the quick-witted Lindy Ruff, the man he replaced two months ago.

Only Rolston’s not making a joke. He’s simply not answering the question.

Rolston said Monday morning that goalie Ryan Miller, who might start tonight in Pittsburgh against the Penguins, could play at home again.

In between two Bronx cheers, Miller sarcastically saluted the crowd shortly before he was yanked Friday.

The Sabres close the season at home Friday against the New York Islanders.