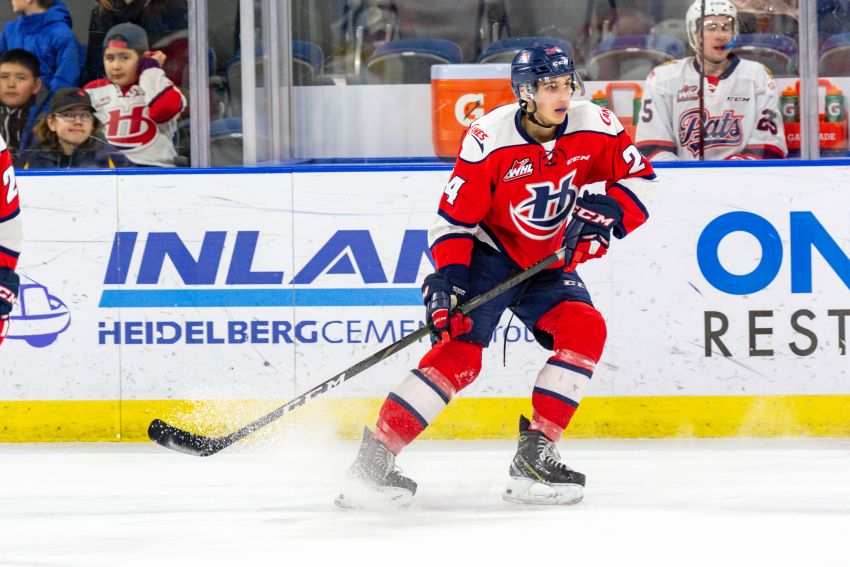 Dylan Cozens made a positive impression on the Sabres. ©2019, Erica Perreaux, Lethbridge Hurricanes

“He was watching,” Krueger said this afternoon.

Then Cozens, who was sent back to the Lethbridge Hurricanes today, “really grew up” in the second week, Krueger said.

In addition to his skills, Cozens showcased poise few 18-year-olds possess. In Friday’s 3-0 preseason loss to the Toronto Maple Leafs, he was one of the Sabres’ best players.

Still, the Sabres believe playing in the junior Western Hockey League this season will be his best development path.

In Saturday’s contest against Toronto, the grind of playing back-to-back nights caught up to the seventh overall pick. His ice time dipped in his third exhibition outing.

“We believe he goes away from here a better player than he was when we drafted him,” Krueger said this afternoon inside KeyBank Center. “We believe he’s going to come back and make a very hard push for being a part of this team next year.”

Krueger said he understands Cozens is probably experiencing “some pain” from his demotion.

“But there’s a pace and an intensity to a National Hockey League season that we just didn’t feel that he was quite ready for,” Krueger said.

But the 6-foot-3, 188-pound center was cleared to play before the Prospects Challenge.

“The way he dealt with the adversity of the injury and the hand, he could’ve very easily slipped out of the rookie camp with that, but no, he fought his way into that,” Krueger said.

Krueger said Cozens’ personality and skills stood out to him during his short time around the youngster.

“He’s just a great teammate, wonderful athlete to coach, he’s extremely open to advice and inputs, how he can make his game better, which shows he wants to improve every day,” Krueger said.

“There’s an acceleration there and a gear that you only see in the elite players in the National Hockey League,” Krueger said. “But he’s got the skills that can carry that speed into the offense. He’s responsible and aware of what he needs to do without the puck to be an NHL centerman, and he saw how difficult how difficult faceoffs are here.”

With Lethbridge, where Cozens scored 34 and 84 points in 68 points last season, the Sabres probably expect him to be a dominant player.

Cozens will likely be a candidate to represent Team Canada at the World Junior Championship in December.

In others new, the Sabres practiced for 80 minutes today inside HarborCenter following Wednesday’s 4-3 overtime win against the Columbus Blue Jackets.

“We saw today as a last chance for a bit of a push,” Krueger said of the long session.

If they’re healthy enough, both could play in Saturday afternoon’s preseason finale against the Pittsburgh Penguins.