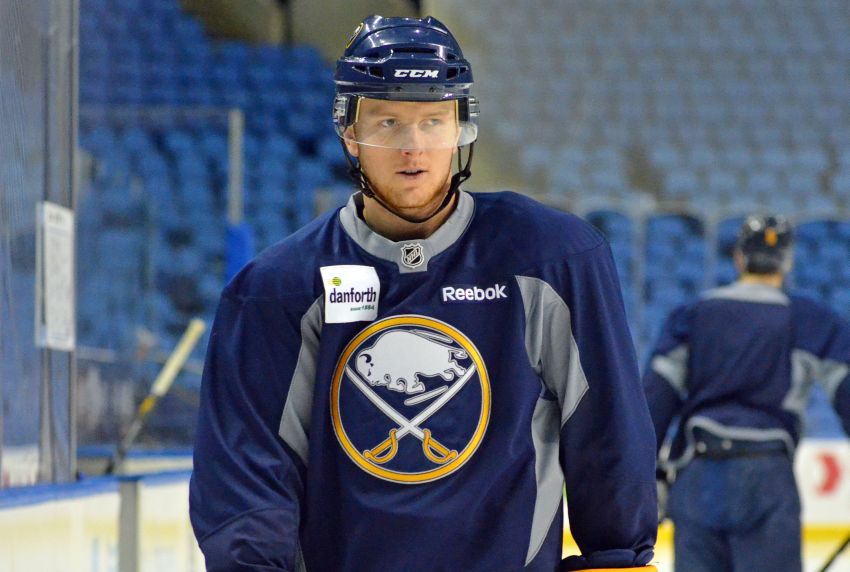 “Those are tough hits that we have to get rid of,” Nolan told reporters in Philadelphia following the Sabres’ 5-2 loss. “Those are not only dangerous hits, but it’s a putting a fellow player in jeopardy of his career.”

He added: “It’s just a dirty hit, and we don’t need them in our game.”

Rinaldo was given a match penalty and tossed from the game. The winger will likely be suspended.

The Sabres, meanwhile, will possibly have to summon another defender from Rochester.

Defenseman Christian Ehrhoff left the game with 70 seconds remaining after Scott Hartnell’s shot hit him in the right ear.

“I didn’t see the doctor, but it looked pretty serious,” Nolan said.

A whopping 12 Sabres are now injured.

Update: Courtesy of the Flyers, here are some quotes from Rinaldo:

On what happened on the hit:

“Just had a lot of speed going at him. I put my shoulder down. As I hit him he shot the puck and my shoulder hit his head, clearly.”

He said “the proof is in the pudding right there” about the elbow.

On his whole night, which also included a goal:

“Yeah, that always happens to me. I get on a good streak then something bad always happens. I deal with it and try not to think about it too much.”

On what he expects to happen suspension-wise:

“I haven’t talked to (NHL disciplinarian Brendan) Shanahan or anyone like that for maybe a year and a half now. I don’t know what to expect. It could go either way.”