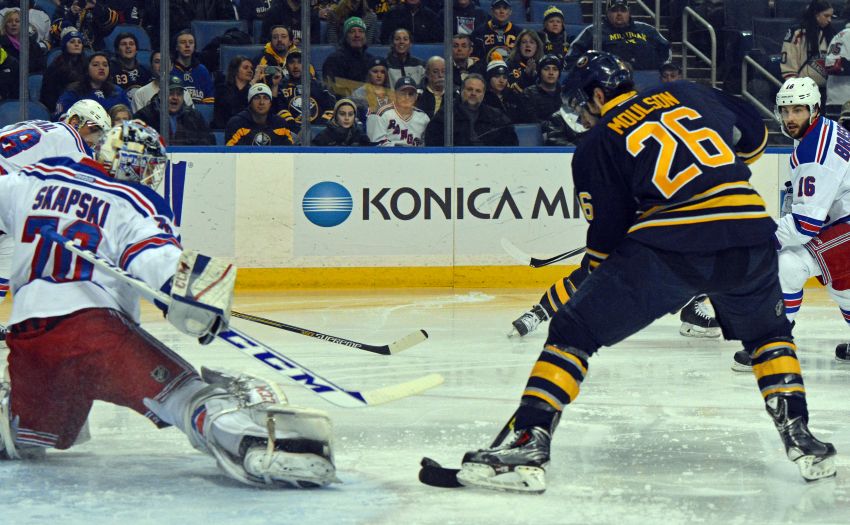 Skapski, 20, has been dressing for games as superstar goalie Henrik Lundqvist recovers from a neck injury. The 2013 sixth-round pick spent most of his first professional season playing in the AHL before getting recalled earlier this month. He even made one start in the ECHL.

Before Skapski could settle in, Matt Moulson beat him on the Sabres’ first shot just 14 seconds into the game. But the Sabres rarely tested the neophyte again, sprinkling only 12 shots on him during the first 40 minutes – six in each period – of their 3-1 loss to the Rangers.

“Getting 12 shots in the first two periods on a young kid isn’t good enough,” Sabres captain Brian Gionta said. “We got to challenge him. We got to make him work for it.”

Sabres winger Nick Deslauriers added: “Congratulations on his first win, but we didn’t shoot the puck at all.”

The Rangers roared back, tying the game at 5:51 on Carl Hagelin’s breakaway goal. Rick Nash’s slick one-timer 37 seconds into the second period, his 37th goal this season, held up as the winner.

The Sabres also couldn’t contain the Rangers, who pumped 43 shots on goalie Michal Neuvirth. Mats Zuccarello sealed the game 8:05 into the second period.

“Certain nights the other team is going to be a little bit more highly skilled than us,” Nolan said. “But … we didn’t quit. We battled back a little bit in the third. We just didn’t have enough.”

The Sabres crept back into the game, getting 13 shots on goal in the third period. By then, however, it was too late.

“We got to find a way to mentally prepare ourselves to be in that game early,” Gionta said.

Both teams expended lots of energy on Thursday. The Sabres won a 3-2 shootout in Philadelphia, a game that started at 8 p.m. The Rangers, meanwhile, lost a 5-4 home shootout to Vancouver.

Still, the Sabres had some jump, scoring before many of the 19,070 fans inside the First Niagara Center settled into their seats.

Moulson’s goal was his first in seven games, his second in 24 and just his ninth this season. It was also the 150th goal of his career and his 300th point.

“You go out, you score in the first shift, you hope to build off of that,” Gionta said. “After that, (we) kind of got flat. We weren’t sharp with our passes.”

As Gionta lamented another lost opportunity, down the hallway Skapski was “super pumped.”

“It’s my dad’s birthday today, I couldn’t have scripted it better,” he said.

Following the tough start, Skapski settled into the game.

“It’s not the start I wanted, that’s for sure,” he said. “I think I rebounded well from that and … in the second and third I was pretty calm, cool and collected.”

Skapski’s the third-youngest Rangers goalie to earn a win in his debut. The Rangers have won five of the last six games (5-0-1).

The Sabres have dropped 17 of the last 20 contests (3-16-1). The also lost defenseman Mike Weber to an upper-body injury Friday. The gritty veteran left after taking a “pretty good hit” and was being evaluated, Nolan said.

Nolan grouped Weber’s injury with Josh Gorges, who could be lost for the season. With Weber out, Deslauriers moved back to defense, his natural position.