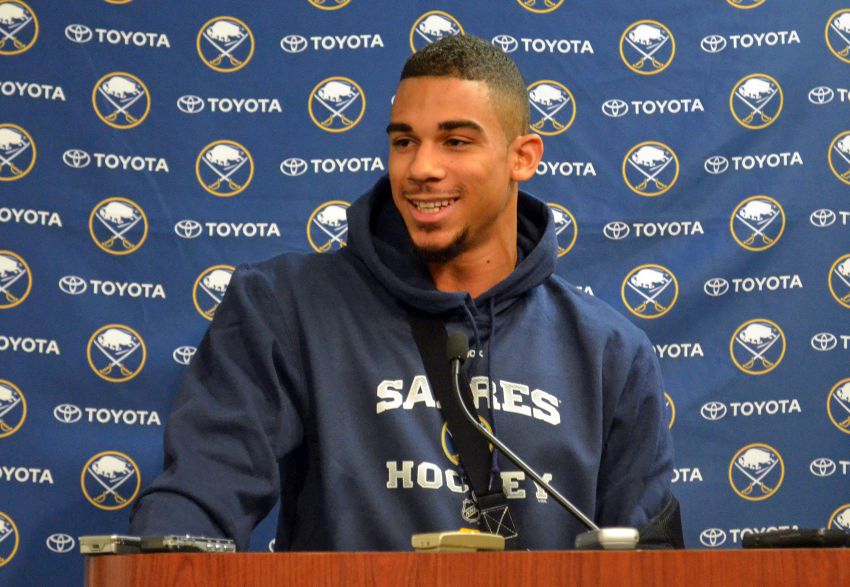 BUFFALO – Evander Kane wouldn’t get into the details what happened earlier this month during his final days with the Winnipeg Jets. Still, the 23-year-old Sabres winger wanted to clear one thing up.

“Was I wearing a tracksuit? No,” Kane said this afternoon during his introductory news conference inside the First Niagara Center. “But it’s something (that) tends to get blown out of proportion, especially playing in a Canadian market.

“There’s been numerous things that have happened in the past that are completely false. So we’ll leave it at that.”

By now, it’s well known Kane’s former teammates reportedly threw his tracksuit in the shower after he allegedly violated the team’s dress code. Kane responded by not showing up for a game that night and later having season-ending shoulder surgery.

Kane’s Feb. 11 trade to the Sabres in the blockbuster deal that sent defenseman Tyler Myers to Winnipeg was maybe “overdue,” he said. Incidents dogged Kane over his four years in Winnipeg.

“I think obviously it was a situation that was unique and I guess fun for some people,” he said. “Sometimes you need a fresh start. I was playing hurt with a majority of injuries throughout the season, just took a toll and it was time for me to get my surgery done.”

“It’s a little tougher than a Vancouver or a Toronto, where you can maybe get away a little bit,” he said. “It’s a fishbowl. Being a Winnipeg Jet was something that everybody knew who you were. They always wanted to talk to you, which is great, and that was definitely one of the things you enjoy. But negative things can take a toll a little bit.”

That’s why Kane’s so excited for his “fresh start” with the Sabres.

“Looking forward to moving on to bigger and better things here in Buffalo,” he said. “The organization has been fantastic in how they’ve treated me so far, the way they’ve brought me in. (I’m) really happy. My parents are really happy. That’s always a good thing as well.”

Kane will only be in town briefly. He plans to go home to Vancouver and continue his rehab.

“The surgery was a little bit more complicated in terms of what it was,” he said. “There was a hole actually in my shoulder as well. But everything’s fixed.”

“It’s obviously a team that hasn’t been doing great this season but I think is on the up,” he said. “Meeting a lot of management and people in the organization, it’s made me feel really warmly welcomed and I think really optimistic going forward.”

Check back later for a full story on Kane!

One thought on “Evander Kane happy to join Sabres, believes trade from Jets was ‘overdue’”