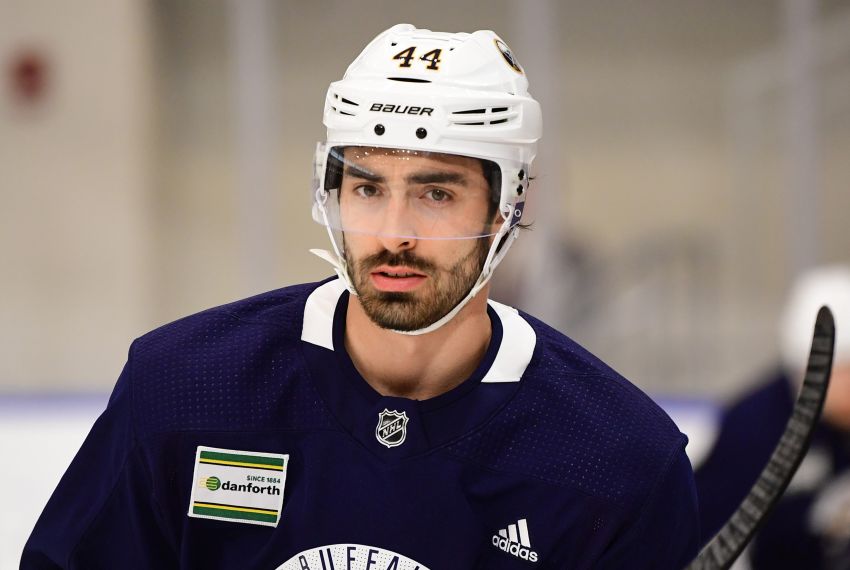 BUFFALO – Right away, Brandon Hickey’s former Boston University teammates reached out to him. Jack Eichel, Danny O’Regan and Evan Rodrigues all welcomed the defenseman to the Sabres with text messages.

Hickey, 22, already looks comfortable with the Sabres, who traded winger Hudson Fasching to the Arizona Coyotes for the former third-round pick and forward Mike Sislo on June 14.

“There’s some familiar faces within the locker room there,” Hickey said Thursday. “When I heard about the trade, I was pretty excited about it.”

In addition to the three ex-Terriers in the organization, Sabres assistant general manager Steve Greeley was a BU assistant coach during Hickey’s freshman season.

“It helps a ton,” Hickey said of Greeley’s presence. “He was the one who kind of got me to BU. He was there through the whole recruiting process. … He was a big piece in my deciding to go to BU.

“So him being here and being as close as we are definitely helps coming here and making things a lot easier for me.”

But Hickey’s time here could be limited to development camp. As a 2014 draft pick, he can become an unrestricted free agent if he’s still unsigned Aug. 15. The Sabres can’t ink him until Sunday.

While the 6-foot-2, 201-pound Hickey is clearly happy with the Sabres, there is no guarantee he will sign.

“I’m extremely excited, haven’t really talked about a role quite yet,” Hickey said inside HarborCenter, where camp concludes today with a three-on-three tournament.

Changing organizations is nothing new. The mobile defender has been the property of three before ever playing a pro game.

“A little bit of a suitcase,” he said.

Hickey attended three development camps with Calgary after the Flames drafted him 64th overall. He participated in one after Arizona acquired him last year.

But as Hickey’s rights moved around, he stayed at BU, playing four seasons.

“I wanted to develop my role a little bit,” said Hickey, who served as the Terriers’ captain last season. “I didn’t want to just want to be one of the three, four guys. I want to be a No. 1, 2 defenseman and take on a leadership role. That’s kind of the opportunity I was given my last couple years. I think it really helped me grow as a person and a player.”

As Hickey passed on pro opportunities, he said some of his friends who played junior hockey asked him why he remained in school.

“It’s not a sprint to get where you want to go to the pro level, it’s a matter of how long you stay once you get there,” he said. “You’re not trying to get there as quick as you can. I want to be a guy who can stay around and play for a while.”

Hickey said he was trying to figure out the market and what kind of role the Coyotes had for him before negotiations stalled a little bit.

Seeing the young talent the Sabres possess reminds Hickey of what he experienced during his freshman season, when the lethal line of Eichel, O’Regan and Rodrigues helped the Terriers compete for a national title.

Ukko-Pekka Luukkonen, perhaps the Sabres’ goalie of the future, was taken in third overall in the Canadian Hockey League Import Draft by the Sudbury Wolves on Thursday.

Luukkonen has always played in his native Finland. But could the selection entice him to try North American hockey?

“We’ll see,” he said. “We have to talk about it with the agents.

The Sabres drafted Luukkonen in the second round, 54th, in 2017. He recently signed a three-year, entry-level contract.

Everyone is still talking about it.