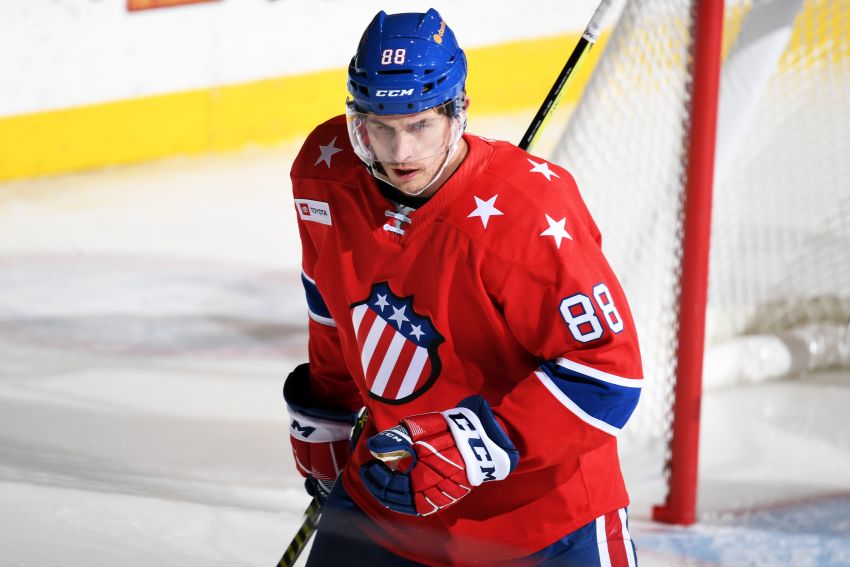 ROCHESTER – In his first season with the Sabres, Brandon Davidson has mostly served as an extra defenseman, moving back to the taxi squad after playing the odd game.

So when an opportunity materialized for Davidson, 29, to skate for the Americans on Friday, he jumped at it.

Having played just six times with Buffalo this season, he needs to experience game action.

“That’s all it is is repetition,” Davidson said on a Zoom call following the Amerks’ 6-2 loss to Syracuse Crunch at Blue Cross Arena. “For myself, it’s been hard kind of finding my way into the lineup. For me, right now, I think it’s just nice to get out there and find my game again. You need to play. Practice only gets you so far.

“I feel great in practice, but the game’s a different situation. It is nice to come down here and it’s is nice to play games.”

Actually, Davidson played just one game with the Amerks. The Sabres summoned him back to the taxi squad this morning with forward C.J. Smith, who was also sent down Friday.

With the Sabres off Friday and the Amerks playing at home, Davidson and Smith had what amounted to a one-game conditioning assignment.

In a normal year, of course, Davidson would likely be playing regularly with the Amerks. They could use a veteran with NHL experience – he has played 180 career games – to help mentor their young defensemen.

On Friday, the 6-foot-2, 209-pound Davidson skated beside prospect Oskari Laaksonen. He also manned a point on the power play.

Like most NHL depth players, Davidson enjoys a bigger role when he returns to the AHL. For example, he had 20 points in 34 games with the Stockton Heat last season.

“In the NHL, there’s players that are better at that job than I am,” said Davidson, who hadn’t played since March 16. “Not that I’m incapable of doing that. I just feel like sometimes you get painted with a brush. I mean, my game is a hard game and a simple game. That’s where I really flourish. If I can stick to that, that’s great.

“But coming down here and being able to kind of open myself up and round out my game through the offense is really what I want to do. I want to be a more rounded player.”

Davidson felt poor officiating marred his first outing with Rochester. The Crunch had three first-period power plays. Its fourth goal also counted even though Amerks goalie Ukko-Pekka Luukkonen appeared to be interfered with in his crease.

“I felt like we fought against the refs,” Davidson said.

He added: “If we had more time on the clock and then we had a better ref, we would’ve been all right.”