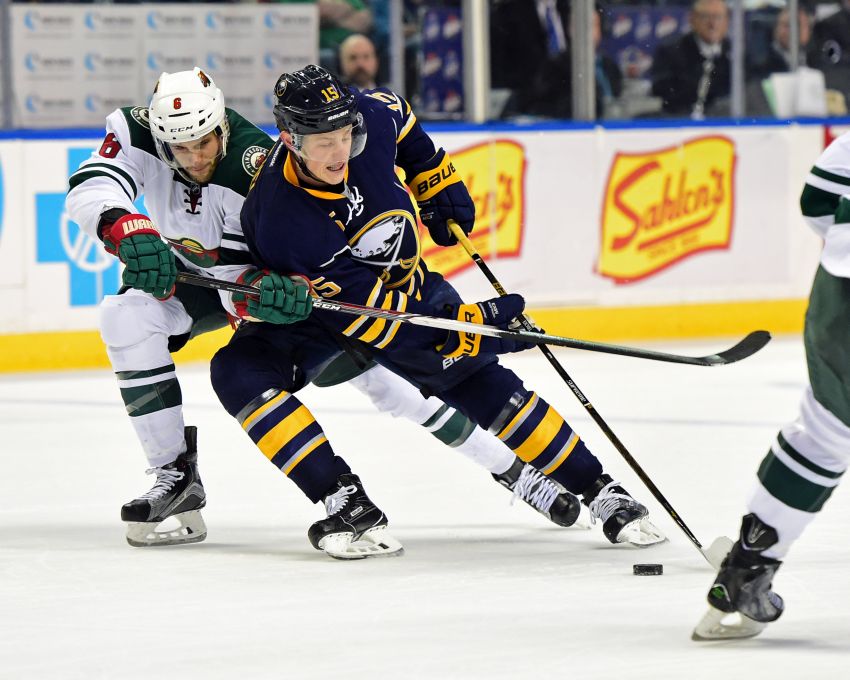 BUFFALO – Finally, thanks to rookie Jack Eichel’s score, it appeared the Sabres’ first shootout goal in months would help them eke out a win after blowing a late lead against the Minnesota Wild.

Eichel, just 66 games into his career, already has a commanding on-ice presence. His exploits create excitement and momentum, and his first NHL shootout goal in four tries had the capacity crowd of 19,070 fans inside the First Niagara Center buzzing Saturday afternoon.

“I kind of expect it,” Pominville said about the booing. “It’s all fun. Just happy I was able to put one in and get the win but … it will always be special to come back here, for sure.”

Thanks to some terrible shootouts – the Sabres are now 1-4 overall – they’ve frittered away precious points. Eichel’s goal was only their third in 23 attempts this season.

The Sabres hadn’t even scored since their only shootout win Oct. 21 against Toronto. At least they made some progress, right?

“It’s just frustrating with our shootout results so far this year,” Eichel said. “There’s a lot of skilled players on this team. I … don’t think we’ve been good enough. The shootout’s an opportunity to grab an extra point. I think as a group we can bear down and start taking advantage of it.”

The game shouldn’t have even reached a shootout. Thanks to second-period power-play goals from Eichel and Johan Larsson, the Sabres took a 2-1 lead into the third period against the Wild, who were 1-18-5 when trailing after 40 minutes.

The Sabres had killed 27 of their last 29 penalties before Mikko Koivu’s power-play goal tied it with 5:41 left in regulation. The Wild, meanwhile, had converted one of its last 16 power plays.

“A big kill probably wins us the game,” Sabres coach Dan Bylsma said. “Our penalty kill has been so good for us for long periods of the game.”

The Sabres clearly tried to exploit the Wild, which is 1-10 in overtime this season, by playing aggressively during the three-on-three session.

“We’ve been trying to win every darn three-on-three we’ve gotten into,” Bylsma said. “We’re not playing for the shootout.”

“I take responsibility for us not winning that game,” Kane said. “I’m counted on to produce and score when I get those type of opportunities. I definitely didn’t do that tonight. Really no excuse.”

Bylsma added: “You want that guy in those spots to score goals. He had a number of good looks.”

So did the Sabres, who pumped 32 shots on Dubnyk.

“I think we played well,” Eichel said. “We had a lot of chances. We did a lot of good things as a team. It’s a tough one to swallow.”

Larsson scored his second goal in two games but just his fifth this season. Then Eichel followed with his team-leading 19th goal, converting Reinhart’s nifty no-look pass in the right circle.

Reinhart’s assist was his 30th point. Eichel assisted on Larsson’s goal and has 44 points. The Sabres have two 30-point rookies for the first time since 2005-06, when Pominville and Thomas Vanek, who’s also on the Wild, reached the mark.