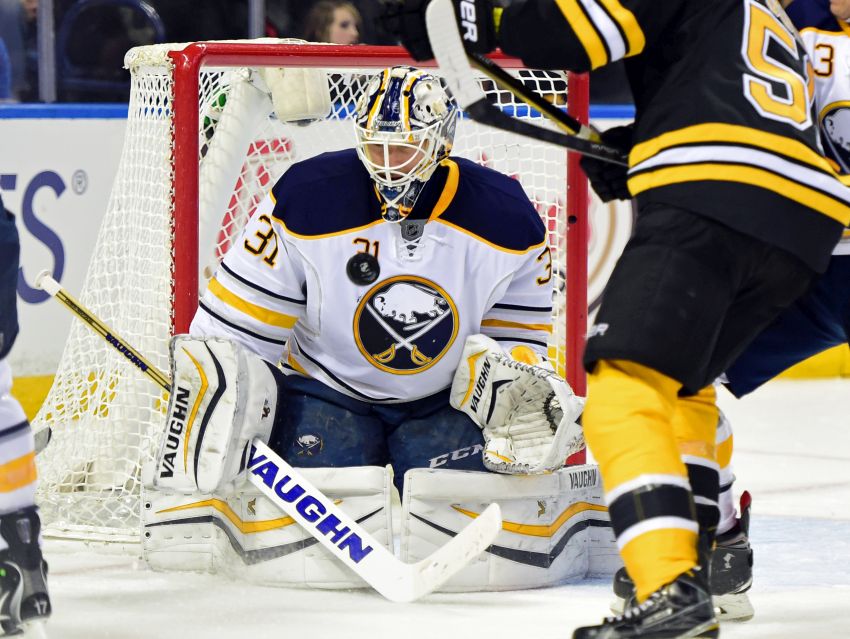 BUFFALO – Despite blowing a two-goal lead at home and losing a precious point to a division rival they’re chasing, the Sabres felt pretty good about the single point they earned for Thursday’s 3-2 shootout loss to the Boston Bruins.

“We deserved to have better in this game and let it slip away,” said coach Dan Bylsma, whose Sabres have earned five points in the last three games and are 6-4-1 in their last 11 outings.

Realistically, if the Sabres have any shot at the playoffs, they have to keep winning two out of three for the final 30 contests to reach the 90-point mark, the likely cutoff for the postseason.

Of course, given they’re 11 points out of the final wild card spot in the Eastern Conference, the playoffs are highly unlikely. Still, the Sabres’ recent efforts have shown they might possess enough talent to go on a run and at least make things a little interesting.

“We want to be a tough team to play against at home,” Sabres winger Jamie McGinn said. “I know our home record isn’t as good. We want to win in front of our own fans. They’re hungry as well for some wins.”

The Sabres appeared to have full control of Thursday’s tilt inside the First Niagara Center, getting a first-period score from Evander Kane and a goal from Sam Reinhart 47 seconds into the second.

But Ryan Spooner scored 58 seconds after they went up 2-0.

“We barely had a chance to sit on it,” Bylsma said about the lead. “We gave it back to them.”

Brad Marchand tied it 2:44 into the third period, zooming down the right wing and lifting a seemingly harmless shot over goalie Chad Johnson’s left shoulder.

Johnson, who made 31 saves, added: “It didn’t surprise me. When he comes down the wing like that, it rolls off his stick and is a goal.”

Other than one shaky goal, Johnson looked sharp. With the Sabres killing off a questionable Kane slashing penalty in overtime, he made arguably one of the best saves in the NHL this season, gloving Patrice Bergeron’s low shot at the top of the crease while falling to the ice with 3:31 left.

“I know Bergeron had a set play there where he grabs it, tries to turn and spin it,” Johnson said. “I knew I wasn’t going to be able to get there with a push, so I just tried to reach back and get my glove there.”

Johnson usually looks calm and in control, but he has three or four spectacular saves this season.

“He’s done many of those this year it seems,” McGinn said. “When he’s down and out, he seems to sprawl back and make that incredible save. It keeps the game alive.”

When the Sabres killed off the penalty, the crowd of 18,845 fans roared for one of the few times all night.

The Sabres then had a power play later in overtime, and Kane, who had a career-high 11 shots, broke his stick on a glorious chance in the slot.

“I broke three sticks this game,” Kane said after sighing. “It wasn’t helpful.”

Spooner scored the shootout’s lone goal. Bylsma used Kane as his second shooter, but he missed on goalie Tuukka Rask.

“I went to him in the shootout because he did have that night,” Bylsma said. “He was shooting the puck from all over, looked to have the hot hand. A couple times it looked like he had beaten Rask with a couple shots. In overtime, I’d love to see his stick not break there. … That’s right where he’s money from.”

To Bylsma, Kane played perhaps his best game all season.

“He’s scored more goals maybe, but that’s as strong and as big as he’s played,” he said.