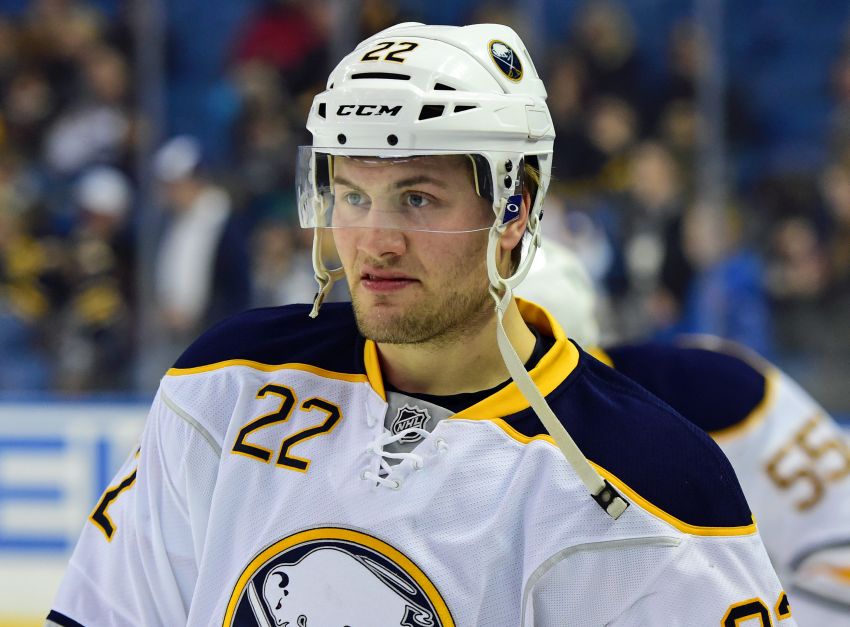 BUFFALO – Early in the Sabres’ 4-2 comeback win Wednesday in Montreal, for one of the few times this season, center Johan Larsson drove to the net with authority and narrowly missed scoring just his second goal.

With 8:14 left in the contest, the Swede skated to the crease again and was rewarded with his first score in 20 games, the winner against the Canadiens.

For Larsson, 23, it was his best performance in what has mostly been a colossally disappointing season.

“No question,” Sabres coach Dan Bylsma replied when asked if it was Larsson’s best game. “It’s a hard goal. It’s driving there, going to a dirty area. Definitely his best example of doing that all year long.”

After compiling five goals and 14 points in his final 20 games as the Sabres’ No. 1 pivot last season, Larsson has only six points in 49 contests so far. He finally scored his first goal Dec. 1, his 28th appearance.

Still, despite the scoring struggles, Larsson has played well in other facets. As a third-line checker, he often faces the opposition’s best talent, especially on the road. He has been playing between Evander Kane and captain Brian Gionta, a line that’s generating offense without shirking its defensive responsibilities. Kane scored the opening goal Thursday in the Sabres’ 3-2 shootout loss to the Boston Bruins inside the First Niagara Center.

“Lars has been playing, I think, real well, hard checking way in the last 10 games or so,” Bylsma said. “(He) hasn’t found himself making plays or finishing plays offensively like I think he can. (He) shows it in practice, shows that shot, that finish ability, but he hasn’t been able to translate it into a game.

“Maybe instead of looking for it on the outside he found it (Wednesday) hard going into the inside.”

That’s a message Bylsma has relayed to Larsson.

“Have a more shooting mentality, take it to the net,” Larsson said.

On Tim Murray’s weekly appearance on WGR on Wednesday, the Sabres general manager strongly hinted winger Tyler Ennis, out since Dec. 30, is having trouble recovering from a concussion.

Murray mentioned “dizzy spells” and said Ennis experiences problems if his bike workouts are ramped up.

Murray also said he has had two or three contract conversations with winger Jamie McGinn’s agent. McGinn, who has 11 goals and 22 points, will be an unrestricted free agent following the season.

In his three NHL seasons, Rasmus Ristolainen’s close friends from his native Finland had never seen him play in person. Naturally, the Sabres defenseman wanted to make their first experience worthwhile, so he figured they should watch him in Montreal’s Bell Centre, one of the league’s best venues.

On Wednesday, five friends saw Ristolainen play against the Canadiens. TV cameras caught the group clad in blue No. 55 Ristolainen jerseys and kept showing them throughout the game.

Ristolainen said his friends, who came here for the NHL All-Star break and are staying a week, attended Thursday’s game.

The experience Wednesday, he said, “was neat.”

Prior to the game, the Sabres sold “Marcus Moose” plush toys – a nod to winger Marcus Foligno’s nickname, “Moose” – to benefit SABAH, the Skating Association for the Blind and Handicapped.

“That was a nickname I was given by a family member,” he said. “It kind of stuck around for a long time. Then it came into the dressing room and teammates found out about it and it stuck. When I was a young guy, I was the biggest boy in my family, cousins and all that stuff. I was known as an uncoordinated moose, I guess.”