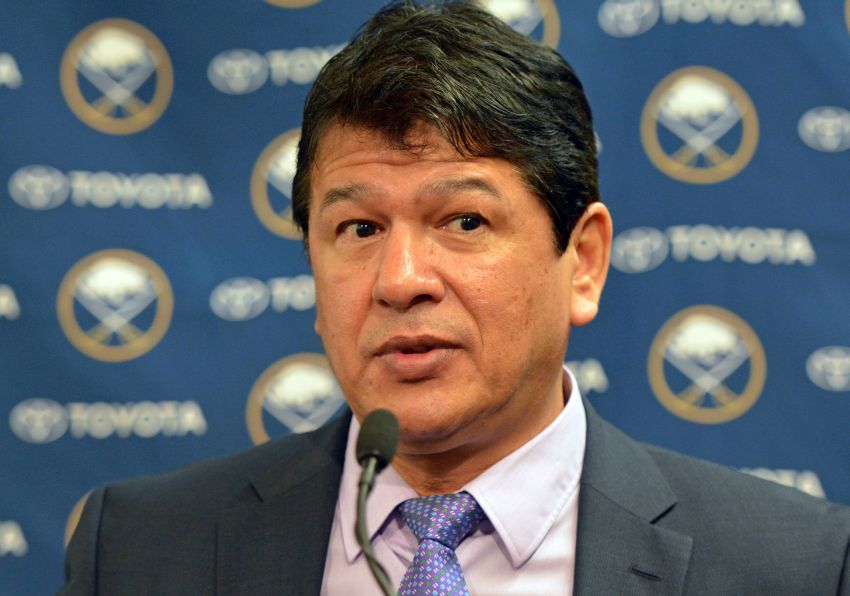 BUFFALO – Six weeks into last season, Sabres winger Tyler Ennis was struggling badly. The Xs and Os of hockey were overwhelming him and sapping the creativity from his instinctive game.

In the past, Ennis said, some coaches “limited me in terms of my creativity and what I’m allowed to do.”

“He’s smart in that he understands what guys can do and what guys can’t do,” Ennis said about Nolan on Wednesday inside the First Niagara Center.

Nolan saw the potential in Ennis’ offensive game, so he gave the diminutive speedster free reign to try things. Ennis then morphed into an offensive threat again, scoring 21 goals.

This season, Ennis, who credits Nolan for “instilling a lot of confidence in me,” has been the rebuilding team’s top offensive threat from the get-go, compiling 20 goals and 45 points.

“In the past, I really haven’t been allowed to try things,” Ennis said. “So I’ve loved it. I think you need to let certain guys play.”

Ennis is Nolan’s greatest success story of the last two seasons. The 25-year-old looks like a budding star and a franchise cornerstone for years to come.

But Nolan might not be around to see Ennis hit the 30-goal or 70-point mark someday. These could be the final days of the 57-year-old’s second run as Buffalo’s coach.

Nolan, of course, knew what he was getting into when he inked a three-year deal late last season. He understood he wouldn’t be given many assets to work with and there were expectations the Sabres would lose this season.

He also knew he wasn’t truly general manager Tim Murray’s hire. While Murray awarded him the contract, Nolan’s friend Pat LaFontaine brought him back, the first act of his four-month run as president of hockey operations.

As expected, Nolan has lost a lot. The Sabres are 30th overall, two points behind Arizona with two games left. But Scotty Bowman probably couldn’t do much with the Buffalo lineup this season.

Still, Murray likely wants to hire his own man at some point, and it could be soon. The Sabres’ awful season gives him a reason.

Nolan has said for months he won’t worry about his future.

Despite losing 57 games, the Sabres have stayed remarkably upbeat. They haven’t quit on a lost season or accepted losing. Players clearly enjoy playing under Nolan. They mention the way he communicates, his motivational skills and the freedom he gives them.

“He’s well-liked,” Ennis said. “I think the guys play for him, they play hard for him. He’s been incredible for me. It’s difficult circumstances this year, a lot of changes were made. So we’ll see what happens.”

He added: “He’s really good at getting everything out of every guy. He’s helped me a lot. He puts fire into guys, and I think when people play with fire, you get the most out of each guy.”

“He’s a former Coach of the Year winner,” he said. “Obviously, the whole team, every guy in here, wants better next year. We’re going to have a different look next year and we all expect better.”

How has Nolan kept the Sabres positive through some dark, uncertain times? He draws on his poor upbringing on a reservation in Ontario.

“It comes down from myself, where I came from and how I got raised,” he said. “We didn’t have too much, but I wasn’t going to sit down and complain about it all the time. You have to learn to work with what you have and be appreciative of what you got. And if you don’t do that, whine about haven’t got this or got that, you’ll be caught into (a) blame game.

“We’re not here to blame anybody. We’re here to do our job the best we can and be appreciative of the life we have. There’s a lot of people in lot worse positions that we are. We’re playing a game. We’re getting paid to do it. We play in front of fans who actually pay to watch us play, so we got a lot to play for, a lot to be thankful for.”

Veteran forward Matt Ellis believes Nolan has changed the Sabres’ culture, something LaFontaine charged him with 17 months ago.

“When you’re trying to build a culture, a lot of times it’s trying to do a lot of little things consistently that are going to add up to greater things in the future,” Ellis said. “I think he really set the bar, especially lately, with how guys approach the game and what guys are doing on a day-to-day basis.

“It’s about getting better and about improving yourself, and you’re starting to see that throughout some of the younger guys in the lineup. The foundation’s there. Their work ethic has become higher. They’ve started to really build on the foundation he created.”