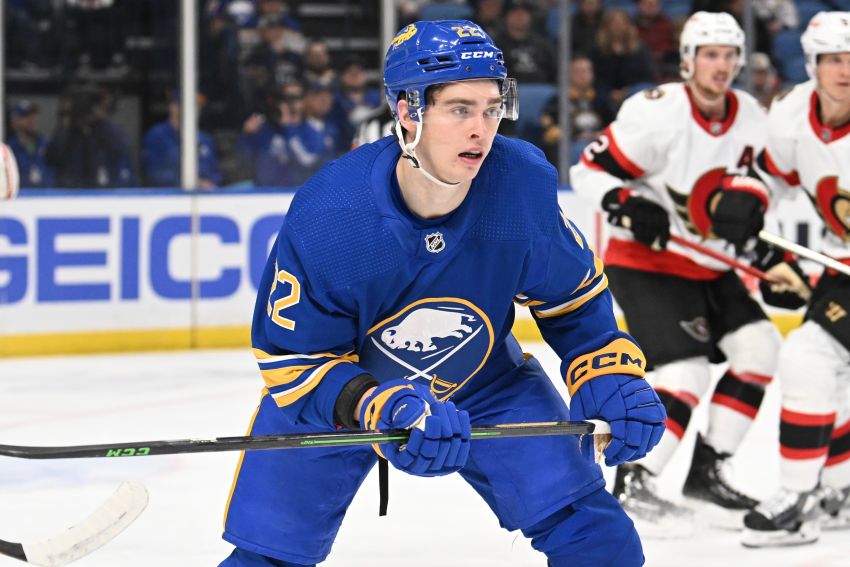 BUFFALO – Sabres winger Jack Quinn, who was struck in the head by the puck Saturday, is being evaluated for an undisclosed injury and likely won’t play this week, according to the team.

The rookie was hit about 12 minutes into the Sabres’ 3-1 loss to the Boston Bruins but finished the game. The Sabres, of course, were already missing another winger, captain Kyle Okposo, who’s day to day with a lower-body injury.

They practiced Monday with only 11 forwards. The Sabres did not lose a player up front to injury this season until Okposo missed Saturday’s game.

Coach Don Granato said the Sabres, who host the Vancouver Canucks on Tuesdayn at KeyBank Center, will recall one or two forwards today from the Rochester Americans.

Some other injury updates from the Sabres:

– Defenseman Henri Jokiharju, who started practicing Wednesday, has been cleared to return from an upper-body injury that has sidelined him the last 11 games. The Finn hasn’t played since a puck hit him in the face on Oct. 18.

“You’re adding a guy in that can play 25 minutes, and that is a lot of hockey,” Granato said following today’s practice. “To have a guy that can give you more stability for 25 minutes is significant. You could look at our margin of defeat and error in the last few nights could simply be put in that context. So, in that context, yes, adding Jokiharju is huge.

“Now, he’s been off a couple weeks. He’s dealt with injuries. So how long will it take him to get back to his level of proficiency? We don’t know that. He hasn’t had a lot of practice and this is probably a supplement to his practice, getting back in there to get back up to his form. So I don’t want to put a lot of pressure on him.”

– Defenseman Mattias Samuelsson, out since suffering a lower-body injury on Oct. 22, has done well in his rehab skates and could practice with his teammates later this week.