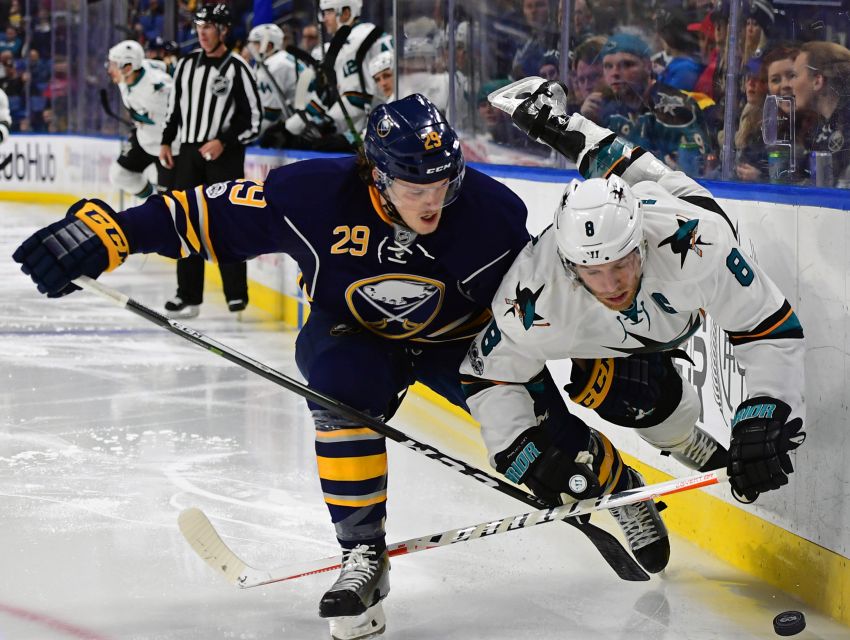 Jake McCabe (29) knows a few more wins would have the Sabres in the thick of the playoff race. ©2017, Dan Hickling, Olean Times Herald

BUFFALO – In what has become another disappointing season destined to end without a playoff appearance, the Sabres have endured 39 defeats. A few have been blowouts, but the club has usually been highly competitive, losing 20 one-goal affairs.

The Sabres have taken leads deep into games before melting down, losing seven contests in which they were up entering the third period.

Want a telltale sign of a team learning how to win? Try an inability to hold a late lead.

After Sunday’s debacle in Pittsburgh, the Sabres have blown three third-period leads in the last five games and lost.

The collapse against the Penguins was especially frustrating.

The Sabres led 3-0 just 18:07 into the tilt, yet frittered it away late to the defending Stanley Cup champions, falling 4-3.

Sabres coach Dan Bylsma said the loss “should be painful.”

“I’m hoping that maybe we’ve had enough pain and enough anguish to maybe turn a corner in learning how to play and win these hockey games,” he said Monday following a team meeting.

On Monday, the loss still stung the Sabres, who host the Philadelphia Flyers tonight at KeyBank Center.

He added: “It (stinks) when you lose that way.”

So what’s the next step for the Sabres? They’ve demonstrated they can play top teams closely, consistently taking them to the brink.

“The next step is learning how to win those games,” Bylsma said. “It’s not just shinny hockey, at the end of game you check to see who won. You got to learn how to win these types of hockey games, and this is the time of year where every game is critical.

“Playing the Pittsburgh Penguins, they’re fighting for points, too. Yes, they’re in a (playoff) spot … but they’re fighting … and that’s what the game had a feel of. Those are games and situations we need to learn how to win and play in.”

Right now, the Sabres are five points out of the final wild card spot, although four teams are ahead of them, including the Flyers.

Imagine if the Sabres had closed out those three recent games.

“We could be right there,” Sabres defenseman Jake McCabe said. “We could be knocking on the door with our positioning, where we’re at.

“We’re still not out of it. If we can string some more together here – and we very well should have – then we’d be right there, and that’s what the really frustrating part is.”

After inching close to a spot two weeks ago, the Sabres have gone 1-4-2 and 1-3-2 since their bye week ended.

So what happens to the Sabres after they start games strongly?

“I don’t want to say we stop playing,” Sabres defenseman Josh Gorges said. “We don’t play enough, we don’t do enough to get ourselves a win.”

He added: “We have to have that mindset of continually playing the way we did throughout, no matter we’re up one, we’re up two, we’re down two. It shouldn’t change the way we approach the game.”

Instead of sitting back, many Sabres want to play more aggressively. Kane, who has 23 goals in his last 42 games, has said it several times recently. So has center Jack Eichel, who was visibly frustrated talking about it following Sunday’s game.

Kane said the Sabres “get away from what makes us successful.” He and others want to keep attacking with the lead

“We stopped trying to score goals,” Kane said. “The way you score goals is you stay aggressive, your mindset stays aggressive – in a way offensive – and that leads to less time in your D-zone.”

The Sabres spent a lot of time in their own zone Sunday. Bylsma said the Penguins generated more scoring chances than any opponent this season.